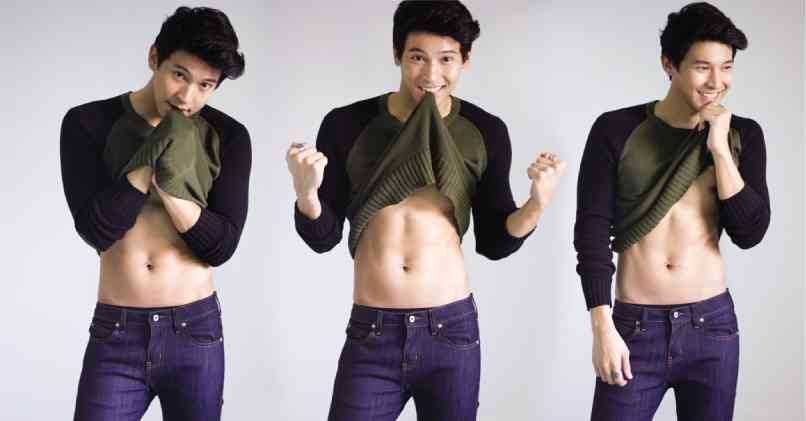 Here’s a tip: If you want to talk to Enchong Dee for hours on end, engage him in a topic he loves—business.

Yes, the stock market and the economy appeal to the 25-year-old heartthrob. “People sometimes approach [me] to confirm or deny rumors about this and that person. Do you really think I will answer that?” Dee said. “I’m more interested in business, intelligent discussions. These are things you don’t usually talk about but want to.”

Dee, a Political Science graduate of De La Salle University, likes to read the business section to check out thriving businesses, how the peso is faring against other currencies and the status of the stock market.

“I tried investing in the stock market twice. After I earned, I pulled back my money,” Dee said. “It’s very hard for me because you have to dedicate your time. I’m very careful with losing money.”

Though Dee’s venture in the stock market may have been short-lived, he hopes to pursue it another time. For now, he’s busy working on his dream project—his first album.

“I was encouraged by a co-producer to write a song. The first one I composed was a song about the Philippines—its beauty and why it’s the best country there is,” Dee said. “I realized that it didn’t fit with the rest of the songs in the album so I wrote another one. [In writing the song,] I was inspired by our movie ‘Once A Princess,’ which is about following what your heart or mind tells you.”

Interestingly, Dee finished writing the song in under an hour.

Dee, who was born and raised in Naga City, said that it has been his dream since he was five years old to perform before a large crowd. “I want to entertain; make people happy and make them groove to the music.”

When Dee joined show business, he didn’t expect the amount of fame he now enjoys.

Looking back, he said he feels blessed to have the opportunities given him, whether by accident or not.

“Originally, I wasn’t part of soaps, then I was cast into it. ‘Katorse’ would be the soap that everyone would remember me by,” Dee said. “That was my biggest break. After that, everything fell into place.”

Dee would go on to make other TV series such as “Tanging Yaman,” “Maria La Del Barrio” and “Ina, Kapatid, Anak,” and star in movies like “The Strangers,” “Four Sisters and a Wedding” and “Once A Princess.”

Indeed, he has become one of the country’s most recognizable and bankable stars of the generation. A quick search on his social media accounts reveals a combined following of close to five million. His Instagram profile contains almost a thousand photos—mostly from travels as part of ABS-CBN’s The Filipino Channel’s road shows.

In June, Dee posted an intriguing photo of their show in Vienna, Austria. He was holding a ring on his left hand and a part of the caption read: “…I am officially engaged here in Vienna

to Nikki Savet…” He would later reveal that he misinterpreted the letter which Savet handed him after the show.

Apparently, the girl gave Dee the ring so that it would be easier for him to propose to her. Nonetheless, it started a craze among his fans. On a later show in Rome, Italy, Dee received a number of “engagement rings.”

Unfortunately though, Dee is already in a six-month relationship with Samantha Lewis. (She was his date to the 8th Star Magic Ball.)

“It was a personal decision to keep it (the relationship). However, nobody listens when we say we want it low-key,” Dee said. “Might as well hand it to them para wala na silang masabi.”

Dee said he and Samantha are foodies. They enjoy trying out new restaurants, especially holes in the wall in the Manila area.

“I usually wear a cap [when we go out]. I don’t like drawing attention, especially if it’s a private time,” Dee said.

And because Dee loves to eat, he staves off the weight gain by swimming, running, biking and spending at least one and a half hours in the gym.

Dee has been putting extra effort for Bench’s Naked Truth tonight at the Mall of Asia Arena—the fashion show where “people expect us to be naked.”

So will he be? “I think so. Yun din yung mahirap. If people saw you na ‘sexy-sexy’ from the very start, they’ll expect you to be sexy till you’re 50.”

In November, Dee will celebrate his 26th birthday. Now that he’s approaching the third decade of his life, how does he envision himself in the years to come?

“A very close person told me a couple nights ago, ‘I want you by the time you’re 30 na hindi ka na magwo-work,’” Dee said. “‘…When you reach 30, chill ka lang… you may still work but you’re not begging the company to give you more work because you didn’t save enough.’”

He added that now that his dream album is about to hit the market, he might start another dream project—buying and selling of real estate properties.