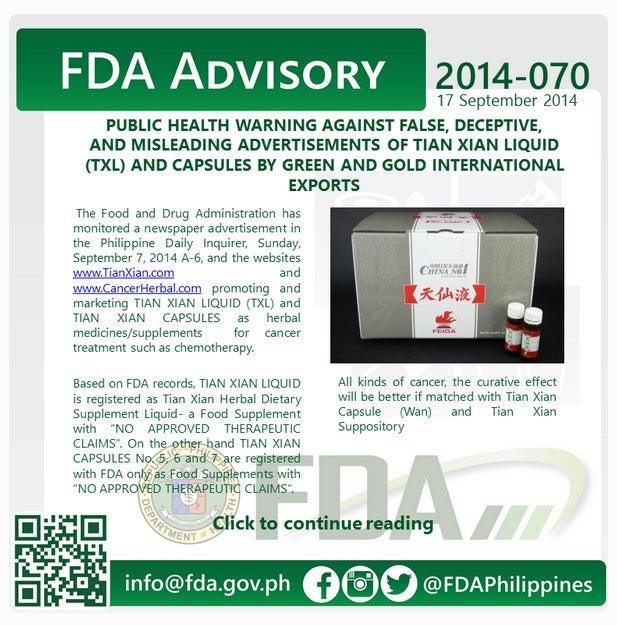 MANILA, Philippines — Capsules that work like chemotherapy? Don’t fall for this claim, the Food and Drug Administration (FDA) has warned.

In an advisory issued on Wednesday, the FDA said it has monitored a “deceptive” advertisement that was published on the Philippine Daily Inquirer last September 7, promoting Tian Xian Liquid and Tian Xian Capsules as herbal supplement for cancer treatment like chemotherapy.

The print ad was supposedly a testimonial of a Malaysian survivor of signet ring cell carcinoma who took the herbal medicine following her operation for breast and ovarian cancer.

She claimed that after taking the capsules for six months, her white blood cell and platelet counts became normal and her ovarian tumor had shrunk.

The online promotion also claimed that the product functioned complementary to western therapies and that many cancer survivors from the United States, Japan, Hong Kong, India, China, Philippines, Taiwan, Malaysia and Thailand have attested to its efficacy.

Go also noted that Tian Xian Capsules No. 5, 6 and 7 were registered with the FDA merely as food supplements, also with no approved therapeutic claims.

“Promoting or marketing Tian Xian Liquid and Capsules to control, inhibit and destroy cancer cells is false, deceptive and misleading the public as these indications are not approved by the FDA for Tian Xian products,” said Go.

He also warned consumers that the products being advertised have “no curative value” and its claims have not been backed by clinical studies or scientific evidence.

“No clinical studies or scientific justification has been shown to substantiate the claim that the use of Tian Xian would cause dramatic regression of ovarian tumor in cancer patients,” added the FDA official.

The case has been placed under investigation by the FDA, said Go.