From ‘Taong Grasa’ to ‘The Glass Menagerie’–14 productions to catch in ‘The Imaginarium’ in October | Lifestyle.INQ ❮ ❯ 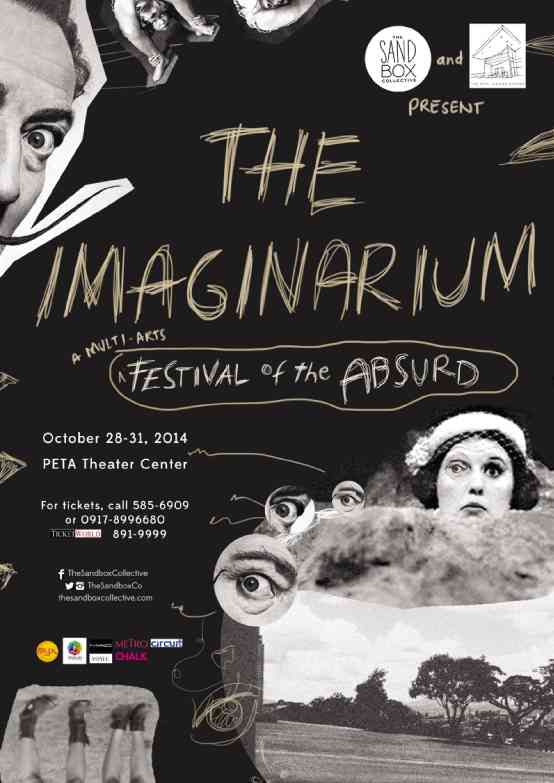 A boy locks himself in his bathroom for a year. Two sadomasochistic sisters plot to kill their employer. Five men hired to carry out a murder end up killing themselves.

These curious stories—and much more—are expected to delight audiences at “The Imaginarium: A Multi-arts Festival of the Absurd” on Oct. 28-31 at the Peta Theater Center in Quezon City.

Guests can catch 14 productions during the four-day festival, along with local music acts, dance performances, art exhibits, film screenings, and even a gastronomic showcase from different chefs.

“The Imaginarium” caps performing-arts group The Sandbox Collective’s 2014 season. Managing artistic director Toff de Venecia says he has always been playing with the idea of the “theater of the absurd,” which is the festival’s main theme.

“It’s a style that I’ve always been passionate about,” says De Venecia. “What I like about it is that it espouses acceptance—acceptance of the absurdity of the human situation, and, despite that, how you are able to live and move past it.”

The Sandbox Collective’s first production, “Dani Girl” (which will have a limited run during the festival), about a girl struggling with cancer, was actually done in the style of theater of the absurd, says De Venecia. “You have a girl facing terminal illness, but despite that, she’s able to push past it.”

He adds: “Existentialism is a philosophy of a meaningless universe. Theater of the absurd is actually a way to face up to that universe. What we’re offering here may not be for everybody, but it’s something that I feel has to be told.”

A team of artists are working with The Sandbox Collective for the different components of the festival. De Venecia will be curating the theater productions. For music, there’s writer and music enthusiast Ren Aguila. Visual arts will have Philippine Star’s Young Star editor Raymond Ang.

Rogue magazine assistant editor Don Jaucian will handle film, while food and beverage will be by David Ong of the Edsa Beverage Design Group. Dance and movement, meanwhile, will be overseen by Patrick John “PJ” Rebullida of the Daloy Dance Company.

3:30-4 p.m.—Twin bill: “Mga Kuneho,” a one-act play by Guelan Luarca, which was a standout at the Cultural Center of the Philippines’ 2012 Virgin Labfest; “Katabi” by Niki Calma, a dialogue between a man and a woman separated by a wall, which explores themes of confinement and freedom

8-10 p.m.—Tennessee Williams’ “The Glass Menagerie” (restaged by The Sandbox Collective)

10-11:30 p.m.—Off-Broadway musical “The Boy in the Bathroom” (restaged by The Sandbox Collective), book and lyrics by Michael Lluberes, and music and additional lyrics by Joe Maloney, featuring Sheila Francisco, Topper Fabregas and Caisa Borromeo

5:30-7 p.m.—Twin bill: “Over My Dead Body” by Christian Dagsil and “On Your Last Legs” by Fitz Edward Bitana (Project Mayheim Productions)