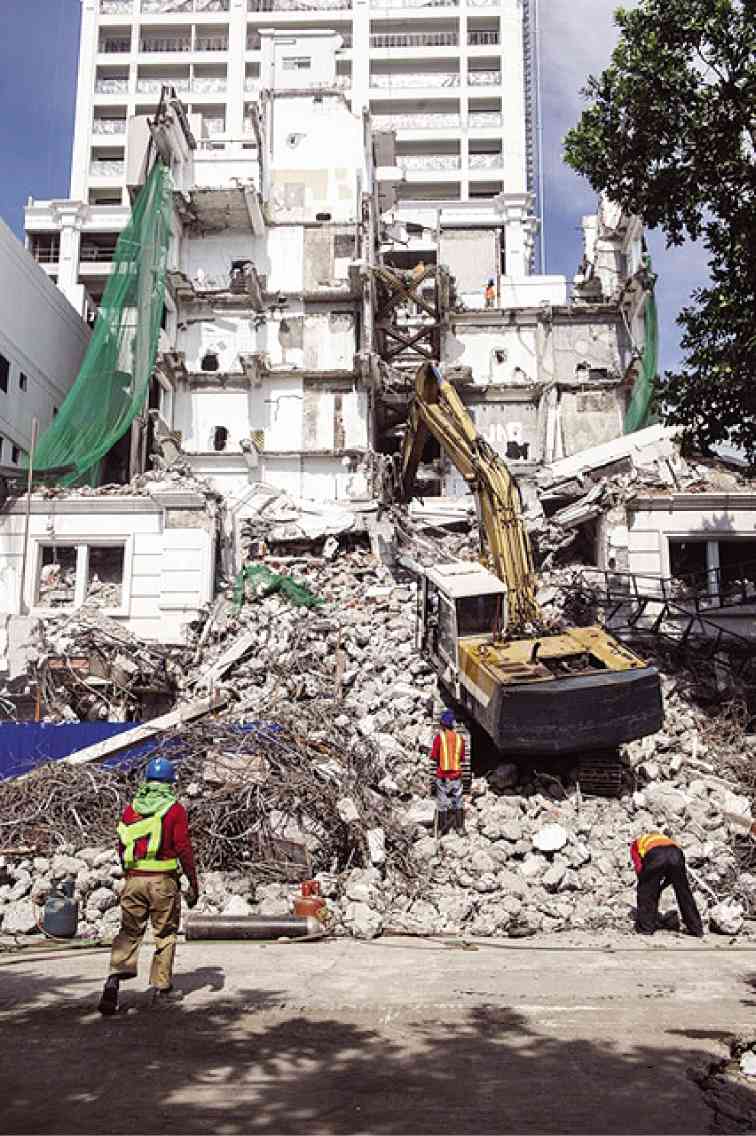 Belated issuance of cease-and-desist orders (CDO) by cultural agencies and the apparent lack of coordination between them may have contributed to the destruction of many heritage structures in Manila.

The structures are more than 50 years old and deemed important cultural properties by the National Cultural Heritage Act.

“This month will be remembered as the ‘September Massacre of Manila’s Heritage,’ with the demolition of three of the city’s most beautiful and iconic heritage buildings in just a span of two weeks,” said HCS president Ivan Anthony Henares.

“We learned that the prewar Michel Apartments, an Art Deco building designed by Francis ‘Cheri’ Mandelbaum in 1937, is also being demolished,” he added. “Earlier, we witnessed the ruthless demolition of the Army & Navy Club of William Parsons, and Admiral Hotel of Fernando Ocampo.”

But the “massacre” could have been averted, it appears.

In the case of Admiral Hotel, Martha Herrera, press relations manager of Anchor Land Holdings, Inc., had written a letter in November last year to the National Historical Commission of the Philippines (NHCP), asking for the historical significance of the Admiral Hotel. Anchor had bought the old hotel and its lot and was seeking to develop it. 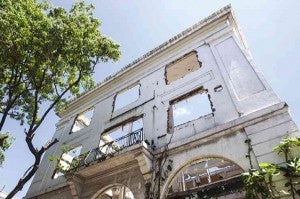 In a letter dated Jan. 8, 2014, NHCP responded to Anchor, saying the building had no historical significance but suggested it be developed for adaptive reuse.

On Sept. 4, Manila City Hall issued a demolition permit apparently without consulting the NHCP and other cultural agencies despite the heritage law which considers buildings that are at least 50 years old as important cultural properties.

The demolition began on Sept. 22 and the National Museum   made an ocular inspection of the site the following day.

It asked Anchor to hold the demolition. On the same day it suggested to the NHCP that the latter issue an CDO.

“However, while the NHCP did not find the Admiral Hotel to possess historical significance, the Old World charm of its architecture might be found worthy of conservation or protection by pertinent cultural agencies, particularly the National Commission for Culture and the Arts (NCCA) and the National Museum.”

But the letter was not a CDO. 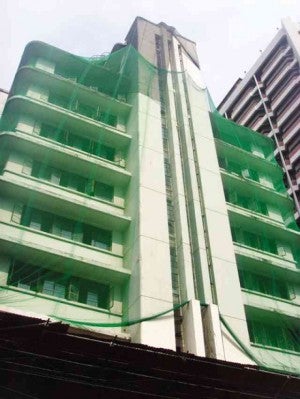 On Sept. 26, NHCP finally issued the CDO against the demolition.

NHCP also noted the developer failed to obtain permission for demolition from other cultural agencies such as NCCA and National Museum that might have an interest in the Admiral Hotel.

“Please submit your final development plan for the property, preparatory to a hearing on the propriety of the lifting of CDO. In the meantime, please observe full compliance with the CDO until the same is lifted by this Commission on writing,” said the letter addressed to Anchor Land Holdings, Inc. chair Stephen Lee.

Bautista said National Museum did not issue the CDO because the building is directly the responsibility of NHCP based on the Heritage Law.

By the time the CDO was issued by the NHCP, a big portion of Admiral Hotel had been demolished. 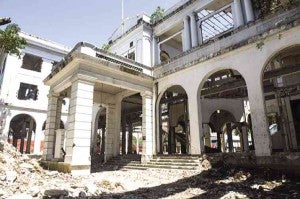 Henares said he does not agree with the “NHCP’s definition of what is historical.”

“Are historical events that transpired the only bases for declaring that a structure is historical?” he asked.

He pointed out that the building was the headquarters of the American High Commission during the liberation of Manila.

He added the building was inaugurated in 1939 by President Manuel L. Quezon. Also, Clare Booth Luce, United States Ambassador to Italy and wife of publisher Henry Luce, was honored with a party there, the HCS head added.

And during the Japanese occupation, it served as the headquarters of the Japanese Navy led by Admiral Iwabuchi Sanji, Henares said. 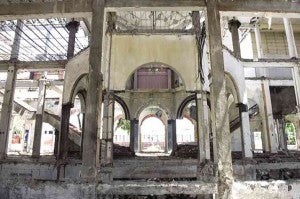 During the prewar era, the Admiral Apartments was said to be the tallest building in Manila and was a seafarer’s landmark.

Henares pointed out Sections 3 and 5 of Republic Act 10086, which changed the name of the former National Historical Institute to NHCP, enjoins the NHCP to “take into consideration both historical and cultural significance…”

“(For the NHCP to demand that) a historical event should have transpired (in a structure) before it merits protection from the NHCP is an abandonment of the responsibility the agency claimed was theirs when RA No. 10066 was being drafted—the protection of structures dating at least 50 years old,” Henares said. 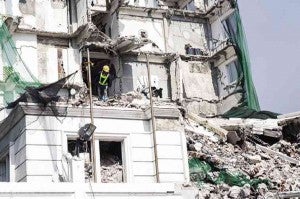 Demolition work on the prewar Michel Apartments in Malate has likewise started.

The building was designed by Francis “Cheri” Mandelbaum, an American who also built the Legislature Building and Central Post Office.

Mandelbaum was also an architecture professor at University of Santo Tomas. He came to the Philippines in the early 1900s.

Because of its heritage value, the HCS through Henares has appealed to the NCHP to issue another CDO for Michel Apartments. 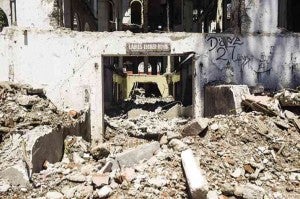 “We also call on the City Government of Manila to immediately cancel the demolition permits issued for both buildings (Admiral and Michel) which are presumed to be Important Cultural Properties,” said Henares.

The role of protecting Filipino heritage lies in various agencies such as the NCCA, NHCP and National Museum, which, according to NCCA legal counsel Trixie Angeles, have mandates under ctheir separate charters.

Aside from the structures presumed important cultural properties under the Heritage Law, the NHCP is tasked to protect national shrines, landmarks and monuments.

The National Museum has a mandate over cultural sites such as the declared important cultural properties, national cultural treasures, and archaeological sites while the NCCA has to protect the works of National Artists, Gawad Manlilikha ng Bayan (Gamaba) Awardees and Unesco World Heritage Sites. 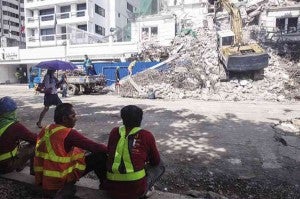 The sightlines of a particular site as well as buffer zones are assigned to the pertinent cultural agency.

The Anda Monument will no longer be moved after results from tests conducted by the NHCP showed the structure is not safe to be transferred.

Also, a CDO was issued by the NCCA on Sept. 25 against the transfer. Angeles explained the NCCA has jurisdiction over the Anda Circle since it is on the buffer zone of Intramuros which has a declared World Heritage Site—the San Agustin Church.

NCCA chair Felipe de Leon meanwhile issued a statement noting that constructions that obstruct the usage and public nature of the country’s public spaces—mostly heritage sites— violate the purposes for which these spaces are created.

“We call on those involved in infrastructure or development to consult and coordinate any and all plans affecting cultural heritage with the NCCA or the relevant cultural agencies,” said De Leon.

“The NCCA shall exercise its obligations under its mandate and fully enforce the constitutional and imperative to protect these spaces and heritage, even against other government agencies,” he added.