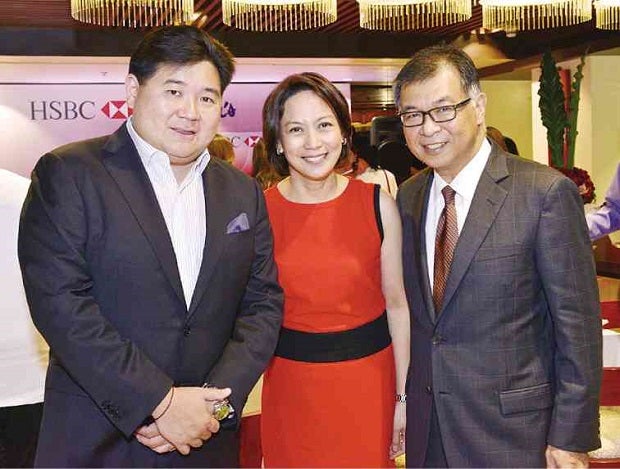 Fashion and shopping take center stage this week. And there is no better complement than the HSBC Red MasterCard, the new BFF of sophisticated ladies who know exactly what they want and know where to find them.

The HSBC Red MasterCard was recently relaunched by top executives of HSBC, MasterCard and Rustan’s at the latter’s East Café. The scarlet-colored credit card is the perfect companion for shopping and pampering, with its zero-interest installment plans, quadruple rewards points, and Red Perks from premium fashion, beauty and wellness partner merchants.

And as a MasterCard, it is accepted in more than 210 countries and territories all over the world.

Among the ladies present were HSBC executives Gigi Pio de Roda from retail banking and wealth management, and Anya Katigbak-Cajucom and Jasmine Alansalon from card products and customer value management.

As one of the original Red card ladies, I was delighted to be part of the relaunch. I still recall the HSBC Red MasterCard billboard on Edsa which prominently figured my mouth!

The affair also sealed the partnership between HSBC and the Red Charity Gala. The bank has pledged a P500,000 donation to the Philippine Red Cross. To start the ball rolling, Wick gave an initial check to the Makati Red Cross that afternoon.

The Red Charity Gala is on Oct. 18 at the Makati Shangri-La.

The HSBC event’s theme was friendship; a Tiffany friendship bracelet was given to a lucky raffle winner. Other guests were treated to TWG teas and savories, and treatments from top skincare brands Clarins, Dermalogica and Murad. I loved the swag bags, which included a travel kit from Benefit.

After the launch, I quickly passed by the Rustan’s fashion halls of Jojie Lloren and Criselda Lontok, looking for outfits to wear for all the upcoming October events. Elegant fashion designer Criselda showed me a few stunning gowns, which got me to start exercising my Red MasterCard.

Criselda had a black gown with giant red roses, which was perfect for the “Mexico: Fantastic Identity, 20th Century Masterpieces, Femsa Collection” art exhibit at the Ayala Museum. The gown was “very Frida Kahlo,” as told to me by Coca-Cola Femsa Asia division CEO Juan Ramon Felix.

He also pointed out that the Femsa Collection is being shown in Asia for the first time, and will run until Nov. 9. The 60 pieces are from famous Mexican and Latin American artists like Diego Rivera, Jose Clemente Orozco, Antonio Ruiz, and, of course, Frida Kahlo.

The Femsa Collection travels all over the world and is Coke Femsa’s way of sharing Mexico’s artistic heritage with the diverse communities where Coca-Cola operates. The full collection has over 1,200 pieces and is housed in a museum next to the Femsa headquarters in Monterey, Mexico.

All I can say, after viewing the works, is that clearly, Filipinos and Mexicans have a shared Hispanic bond that is evident in the similarities between their art and ours.

Juan Dominguez, Femsa human resources director, told me that the Femsa Foundation would support the Red Charity Gala with a P250,000 pledge for survivors of Supertyphoon “Yolanda.”

Apart from the donation, Coke will also have bottles with the names of some Red Charity Gala guests available at the dinner. All this was arranged by PR specialist Keren Pascual, who has always been supportive of charitable fundraisers over the years.

Among the charitable events he supports is the Philippine Fashion Ball (PFB), which was his brainchild. The PFB gathers the A-listers of the fashion industry and recognizes them for their contributions in making the Filipino style sense bloom both locally and abroad.

“No Filter: The 4th Annual Philippine Fashion Ball” honored the fab evolution of Jojie Lloren, who is also the featured designer at the Red Charity Gala, and Michael Cinco, also a previous Red designer.

The event was held at the extravagant ballroom of Raffles & Fairmont Makati.

OS Accessories was also part of the show, all made possible through the generous support of Hana Shampoo and Raffles & Fairmont Makati.

After the PFB, I swung by the charity gala night of leading broadband provider PLDT Home Fibr at Manila Polo Club. The event was for the benefit of Gabay Guro, an educational arm and a flagship project of the PLDT-Smart Foundation, and held in cooperation with The Outstanding Young Men and Junior Chamber International Ortigas.

Pop stars Martin Nievera, Regine Velasquez-Alcasid and Jenine Desiderio serenaded the guests before the auction, which featured works from sculptors Michael Cacnio and Juan Sajid Imao, to name a few.

PLDT Home Fibr is now the broadband of choice among discerning users. Fibr allows seamless, simultaneous streaming, and if you have teenage children like I do, you know this is critical for their various games and web activities.

Check it out at pldthome.com/fibr.