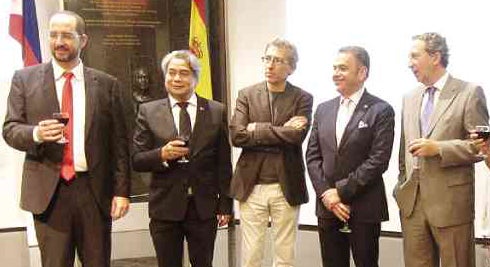 “You just have to admit that some dreams don’t come true.”

These may be words of wisdom from the Spanish dramedy “La Vida Inesperada” (The Unexpected Life), but a bitter pill to swallow for any person struggling to realize visions someplace, time zones away from his homeland.

To be screened in the latest edition of Película/Pelíkula Spanish Film Festival, the film directed by Jorge Torregrosa is about two cousins, Juanito (Javier Cámara) and the younger Primo (Raul Arevalo), striving to make their way in New York. The challenges they face, such as isolation and adjusting to a different culture, will resonate with Filipino audiences, most of whom either have relatives working abroad or have themselves sought greener pastures across the pond.

Juanito left his hometown of Alicante many years ago to become a successful actor, but now finds himself nowhere near his goal. He instead settles for roles in modest theater productions while working multiple jobs to make ends meet.

When Primo comes over for a visit and decides to stay in Juanito’s small apartment, both discover that neither of them is exactly how he seems. Their cramped living space amplifies the rapport as well as the tension that transpires between the two people who grew up together but turn out to be complete opposites.

His unique looks and trademark motormouth make him the consummate funnyman, such as in “Chef’s Special” (2004) and the Pedro Almodovar-directed “I’m So Excited” (2013).

As the bald, bespectacled and scruffily bearded Juanito, Cámara will not only make audiences laugh and root for him—he’ll make the ladies fall for him, too.

Proving his mettle as a character actor, Cámara took home the Best Actor Award at the recent Premios Goya, or the Spanish equivalent of the Oscars, for his nuanced portrayal of a Beatles-obsessed professor in “Vivir Es Facil Con Los Ojos Cerrados” (Living Is Easy with Eyes Closed).

“When I finished the script he’s (Cámara) the one I thought about and he was perfect for the part,” writer-director David Trueba said in an interview before presenting the film at the opening gala of Película/Pelíkula, held Thursday night at the Greenbelt 3 cinemas.

Trueba was in town to promote three of his films featured in the festival—the other two being “Soldados de Salamina” and “Madrid, 1987”—as well as participate in a forum with audiences and other filmmakers.

“Vivir Es Facil,” said Trueba, is a film that speaks about very local things but in the end becomes very universal in terms of the treatment of the characters and the way the story is told.

Set in 1966, or the latter part of the Franco dictatorship, the film took home six Goyas, including Best Film, Best Director and Best Original Screenplay. It was picked up for US distribution after winning the Cine Latino Award at the 25th Annual Palm Springs International Film Festival.

The film is also Spain’s official entry to the Oscars—not bad for a project with such a tight budget that it had to be completed in only five weeks.

Its success owes a lot to its creator’s screenwriting abilities, the makings of which began to manifest in a very young, observant Trueba who loved to write stories about the people around him.

“I’m the youngest of eight brothers, so I had a lot of inspiration and my family was very crazy,” Trueba said. “People thought my stories were inventions, that these were fantasies, but they’re completely realistic.”

The multitasking Trueba said writing comes more natural for him. “I can do it all alone and I don’t need to get to the banks to finance my writing, but… doing a movie is very exciting because you get to the people in a fast, very direct way.”

One of the challenges in Spain’s film industry is that the main distribution has been occupied by American blockbusters and other films, said Trueba.

“We have a chance every year to have 15 Spanish movies that get a lot of audiences who love the films, and these become important for Spaniards,” he explained.

“It is always a mystery how we are able to do it because we don’t have a government that supports very much cinema like [they do] in France and Italy. We have a lot of difficulties to do our films but, in the end, we can maintain the industry with [the help of] the audience.”

Presented by Instituto Cervantes, the Embassy of Spain, the Film Development Council of the Philippines (FDCP), Greenbelt and Ayala Cinemas, Película/Pelíkula will screen 19 films and five short films until Oct. 19 at the Greenbelt 3 cinemas.