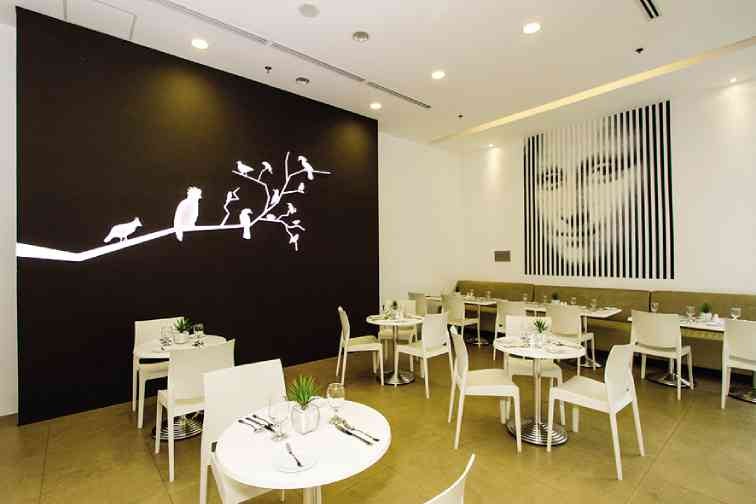 Gab Perez is everything the negative stereotype of a millennial is not.

At 26, he’s the CEO of the real-estate development company he put up at age 21, after graduating from college.

On the first year of his firm, Green Asia Real Estate, he built a 65-room residential building, followed by several build-and-sell houses.

His latest project is the 177-room Privato Hotel on Shaw Boulevard in Pasig City, where he also lives.

Don’t get us wrong—Perez is as outgoing and affable as any young man his age. He’s tall, attractive and hardly a recluse, the exact opposite of the supposed stereotype of a young overachiever.

He likes to travel and has regular meet-ups with friends from school—both undergrad and graduate—to try out new restaurants. He’s on Facebook, but has neither an iPad nor an iPhone—he had tried both the iPhone and BlackBerry, but lasted only a day. He still uses a dinky old Nokia that can only send and receive SMS; he has two extra units on reserve, in case they get phased out.

That means cyber preoccupations such as Instagram are alien, and maybe unimportant, concepts to him.

Unlike self-obsessed and spoiled millennials, Perez struck out practically on his own, with very little help from his parents who trusted their son enough to allow him to learn the ropes in the industry he had chosen, perhaps make mistakes, and to cheer him on in his every triumph.

“I live here now,” Perez says as he gives Inquirer Lifestyle a tour of the 22-floor Privato. He moved into the business-lifestyle hotel from Angelica Manor nearby, the residential condo he built, when Privato was completed earlier this year.

Privato is a 177-room property with ballrooms and function rooms, a roofdeck pool, a gym, a lobby cake bar, a restaurant and a roof bar. It is adjacent to Capitol Commons and Ynares Sports Complex. Privato has partnered with Enderun to run the hotel.

“This is the baby that took forever to come out,” the young man says with a sigh. “I was disillusioned [in the beginning] because the first was an eight-story building. Then I thought we had the chops to do something bigger, thinking it would be the same. But it was completely different.”

For Privato, Perez tapped Carmelo Casas of Casas+Architects to maximize the property’s 600-sq m floor area. Casas’ stint in Hong Kong was put to good use. “He’s used to working on tight spaces, so I think we were able to achieve our goal,” says Perez.

Carlo Calma designed the lobby, “but since we were on a tight budget, we couldn’t execute his design throughout, so ako na lang,” Perez says with a laugh.

The lobby is adorned in part by a commissioned work by recycled-paper artist Wataru Sakuma, another by National Artist Arturo Luz, and a life-size ostrich metal sculpture by Ann Pamintuan.

It’s a decidedly minimalist look overall that reflects the taste of its young developer, who gravitates toward clean lines and neutral colors, akin to his own wardrobe (Joey Samson is his favored designer).

Green Asia prides itself on being a sustainable company, with the use of low VOC (volatile organic compound) materials. Privato used silicon resin paint from Australia for the exteriors, which is four times more expensive but would require repainting only every 15-20 years.

“We put the pool on the rooftop because it significantly lowers the building temperature,” the CEO says.

Perez admits he never imagined going into real-estate development. The youngest of three children of a civil engineer dad and a physician mom, he studied Management Economics at Ateneo de Manila, where he was active in the student council. He had envisioned a life in politics.

“It’s the same concept [with business] I think,” he says. “My dad told me to prove my mettle first in the private sector.”

A few years back, the Perezes had a piece of property in a Pasig village that his father wanted to develop. The son asked if he could take a crack at it. “We got the plans, and by the first meeting, my dad said, ‘I’ll let you be.’ When he came back, Angelica Manor was finished already. We sold out in less than six months; we kept half.”

It was the same thing with Privato; the dad stayed away during construction, the part his son enjoyed the most. While the son is detail-oriented, his dad shuns the nitty-gritty aspect of construction.

For his first project, Perez took out a bank loan, collateralized by his parents. By the time the Privato project came, he had already attracted investors, “mostly Filipino businessmen, not exactly family connections.”

“We use an age-old concept for the hotel,” Perez explains. “You buy a room, but you can’t live in it. You have to lease it back to us. We run it as a hotel; you just get your dividends. We pander to the hassle-free investors, those who don’t want to bother with association fees, etc. The owner gets 70 percent. It’s professionally managed by Enderun.”

In real estate, he adds, the money doesn’t go away. “It just solidifies. The investment is still there.”

Perez says he never felt the disadvantage of working as a greenhorn in a sea of professionals who were twice, three times his age and experience.

“Looking back, maybe they really trusted me,” he says. “In the heat of the moment I don’t see it, but when I look back I’m taken aback also. I’m no risk-taker. When I took my master’s, we had this risk-appetite test. I scored very, very conservative. I have very low appetite for risk. I’m very calculated when it comes to risks. I run to my dad. But what’s good is that he’s very hands-off… I’m used to being given a free rein so I’m not used to working with a lot of partners.”

Perez believes that his strength is in cost management and value engineering. When they were building Privato, the architect offered to build him a penthouse. He declined because it would mean lost revenue. When same architect asked what he wanted to do with the tiny room with a slanted roof just below the parking ramp, Perez offered to use it as his own office because “sayang ’yung space.”

“I don’t know if my youth adds value to the product,” he says. “I think yes… because [I offer a] fresh take. I’m open to advice from veterans. It’s a mix of something fresh and tested.”

When he travels, it’s to check out other hotels. For now, he relishes every minute spent in his own hotel—practically 24/7.

“When I go out that’s a treat for me,” he says. “It doesn’t feel like work so it’s fine. I like living here. I get to have breakfast buffet every day.”