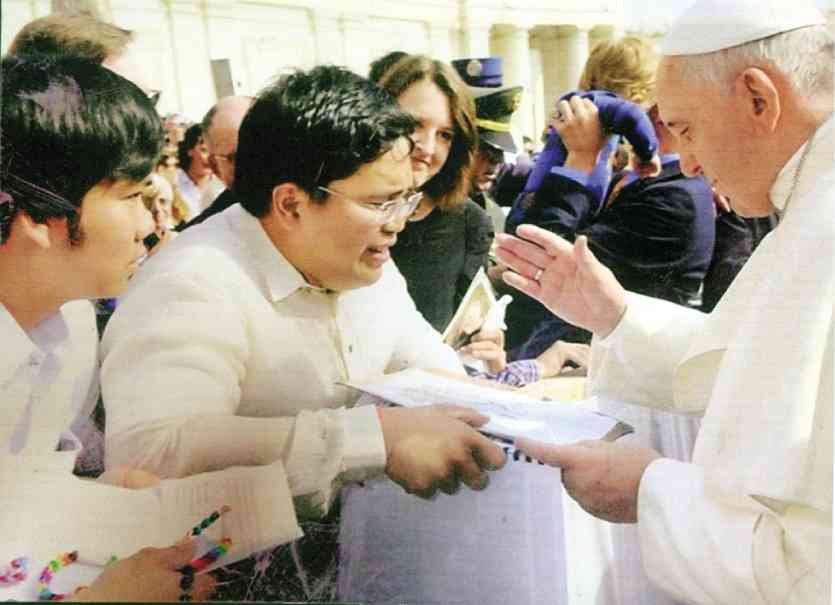 ‘Pope Francis: The Musical’ to be staged; Manaoag reaffirmed as major Marian hub

Opus Sanctorum (OS), or the Work of the Saints Apostolate, promotes the lives of the saints and sanctification according to one’s state of life.

Last Oct. 8, during the Wednesday general audience of Pope Francis, Leandro Tesorero and Lynch Kristoffer Flores of OS presented to the Pope their movement and asked him to bless their ministry.

They also presented the Pope a copy of the calendar they made. “Bella!” the Pope reportedly remarked.

“It was a moment we shall never forget,” said the two Filipinos. “We are truly grateful to the Immaculate Heart of Mama Mary. She will take care of our little gift to the Church.”

The Holy Father reportedly said, “Let us continue to pray for this small movement for the Glory of God.”

Francis O. Villacorta, writer-director of the motion picture “Pedro Calungsod, Batang Martir,” and the stage musicals “Confessions of a Soul: The Life of Saint Augustine” and “Beloved Beata: the Mother Francisca del Espiritu Santo de Fuentes Story,” is mounting “Pope Francis: The Musical” to celebrate the papal visit to the Philippines next year.

“Pope Francis: The Musical” tells the stories of Supertyphoon “Yolanda” survivors and how their dampened spirit is inspired by the humble life of the Holy Father. In an age of greed, hatred and pride, the musical focuses on mercy and compassion.

Love of the environment, God’s creation, is also at the heart of the multimedia musical.

Villacorta said, “It is about how a simple man of God, Vicar of Christ, is embracing the whole of humanity with all of its differences and conflicts and shepherding it back to its Creator. In the end, it is a story of hope and glory that can only be found in God.”

“In an increasingly secular world we live in today,” he added, “we struggle to mount productions that can motivate people to a spiritual awakening. I am telling the stories of Supertyphoon Yolanda victims and the story of Pope Francis to eventually reveal that Jesus Christ, our savior, is indeed the greatest treasure of the human soul.”

“Pope Francis: The Musical” will have libretto by Villacorta, music by Emlyn Olfindo Santos and musical arrangement by Noel Espenida.

The musical goes onstage January to March next year.

Caviteños are anxiously preparing for the feast next month of La Virgen de la Soledad de Porta Vaga, the province’s queen and patroness.

The fiesta is significant since this year is the 25th anniversary of the icon’s theft and recovery.

Salve in the church patio will be at 6 p.m.

“Pope Francis has granted the title ‘Minor Basilica’ to the Church of Our Lady of Manaoag. Deo Gratias!” texted Lingayen-Dagupan Archbishop Socrates Villegas.

Indeed, God be thanked for the declaration, since the ancient church of Manaoag honors the Mother of God, the Blessed Virgin Mary, under her title of Our Lady of the Rosary, the prayer that sums up the mystery of salvation.

The rosary devotion is promoted by the Dominicans, who run and manage the Manaoag shrine.

The declaration reaffirms the heritage of faith and devotion the Marian shrine has fostered through the centuries, said Fr. Gaspar Sigaya, OP, the Filipino archivist of the Dominican curia at Santa Sabina in Rome. (Santa Sabina, which was given by Pope Honorius III to St. Dominic de Guzman and the Dominicans, itself is a titular basilica, and is said to be the oldest extant Roman basilica and one of the most beautiful and best-preserved in Rome.)