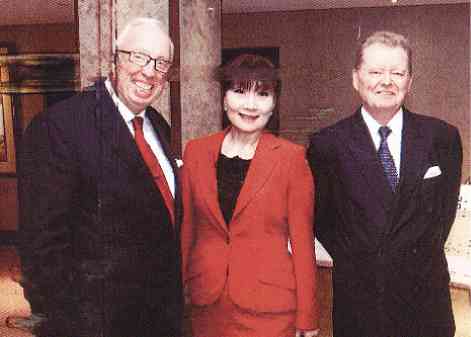 HANS and Bo Hauri with EricWalburger

The Marco Polo Plaza Hotel in Cebu has been cited as Hotel of the Year among the international chain’s properties. This is the second time it has won since opening in 2006.

It was a great cause for a celebration by way of a grand cocktail party at the hotel’s ballroom attended by Marco Polo Hotels International president Eric Walburger and Cathay International Resources chairperson Alfred Ty.

Cebu Vice Gov. Agnes Magpale graced the occasion, which was also attended by George S.K. Ty and his wife Mary, and George Ty.

Beaming with pride was Cebu Marco Polo general manager Hans Hauri with his wife Bo. They were collecting bittersweet congratulations.

First, the award has come as a patent recognition of Mr. Hauri’s leadership during his term of nine years. He and Bo with their twins Morgan and Austin will soon move to Manila.

For Hauri is now the president of Bonifacio Landmark Realty Development Corp. Its task is to put up the Grand Hyatt Hotel in Bonifacio Global City.

Getting her share of kisses and embraces was the statuesque Julie Najar, who is now general manager of the Marco Polo in Cebu. She is the best person for the job, having worked at the hotel since it opened.

Julie will have her hands full in the coming months. There are plans to expand the ballroom so that it can hold 300 more persons, and there is a great possibility that an authentic Chinese restaurant may finally open.

The grand occasion served to recognize the dedication of Marco Polo’s top people. There was Lara Constantino, the sales and marketing director, who has a very supportive team.

Executive chef Stefano Verillo was collecting due praise for the several buffet spreads laden with the best the Marco Polo could offer. On their own bed of ice were juicy oysters from Canada.

At one end of the ballroom, cheese master Richard Poirier reigned supreme amid an astounding variety of cheeses, plus all manner of breads and crackers to slap those creamy slabs on. The chocolates were Cebu-made, by Alfred and Raquel Choa.

There were lots of VIPs present, like Metrobank’s Antonio Abacan, Arts Council vice president Dr. Vivina Yrastorza who gravitated toward Alfred Ty, Gema Luisa Pido who has shared some of her treasured recipes with the Marco Polo chefs, and China’s Consul General Zhang Weiguo.

More: Nestor Alonso, Ollie Dychangco with children Marco and Kate Anzani, Bobit and Jessica Avila, Sandra Pesch, Gregg and Agnes Huettel, May Ybañez of the Cebu Chamber of Commerce and Industry, former Tourism director Dawn Roa, and Tetta Ba-ad who is now with the Cebu City Tourism Commission. She has a big project for September 2015.

What’s up at the Marco Polo in Cebu? On Oct. 21-25 it will celebrate Diwali, the Indian Festival of Light, with due ceremony and exotic splendor. For the duration, Indian cuisine will be available at the lunch and dinner buffet of the Café Marco.

Then comes the Soiree Beaujolais 2014 on Nov. 22, at the ballroom. That also entails a festival of French specialties. At the forefront of the celebration is France’s honorary consul Michel Lhuillier.

And soon, it will be Christmas. Ushering in the yuletide season at the Marco Polo is its tree-lighting program on Nov. 29, eve of the first Sunday of Advent. This will be followed by a series of events at the hotel lobby all the way to Christmas Eve and Day, up to the New Year’s Eve revelry.

Another December highlight at the Marco Polo will be the anniversary gala of La Chaine des Rotisseurs’ Cebu chapter, headed by Amparito Llamas Lhuillier.