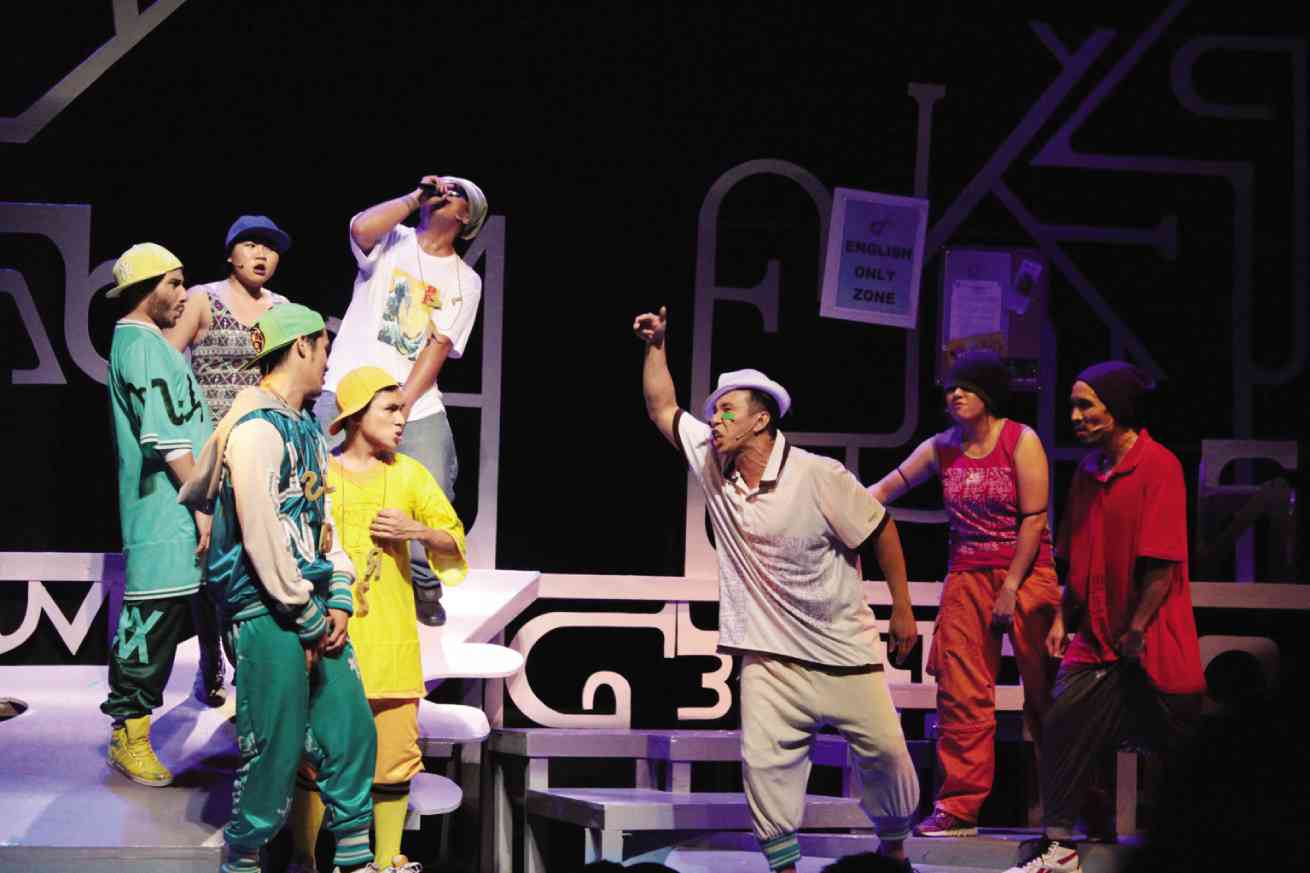 Three years ago, Philippine Educational Theater Association (Peta) put on a show that aimed to make Shakespeare more accessible to the Filipino youth by transplanting the Bard’s dated English to the hip language of rap. The play was “William,” and it was a gamble that handsomely paid off, in both the pedagogical and theatrical sense.

In six performances from Sept. 27-Oct. 5 at the Peta Theater Center, the company previewed a brand-new show that’s pretty much in the same vein as “William”: a two-act play with music, titled “FnL,” which has much to do, but is actually very little about, every Filipino high school sophomore’s nightmare, Francisco Baltazar’s “Florante at Laura.”

Judging by what was glimpsed during this brief run, it looks like the theater company’s all set for another winner, kinks and glaring glitches notwithstanding.

At its best, “FnL” was one crazy roller-coaster ride down the infinite twists and turns that have come to define the 21st-century Filipino language. Some mild postshow pain-killers might have been a good idea, for as long as one hasn’t been living under a rock for the past decade or so, one was sure to exit the theater with aching jaws and overstrained ears.

That’s because “FnL” has a book that is a hodgepodge of variations of the Filipino language—Tagalog, Bisaya, gay lingo, Pinoy slang, jologs speak, the jejemon phenomenon—written by the brilliant trio of Rody Vera, Anj Heruela and Maynard Manansala.

To tell the story of Lance, a Filipino born in the United States with aspirations of becoming a professional rapper, and Flor, a Cebuana call center agent in Manila, the writers have crafted a script that uses “lengua estofado” (an ox tongue dish) as a substitute for “tongue” and turns singer Donna Cruz into a verb, as the gay lingo equivalent of “doon” (there).

Some of the transpositions were a bit more obvious. The character that is the embodiment of all things tacky, corny cheap and low-class is named Jologs, for example. But there’s no denying the fact that, to untrained ears, this script was a challenge to follow. (This highlighted the need to polish the lights and microphone cues, and also for a sound design that would tip more in favor of the actor’s voices, instead of the background music.)

A script that plays with language to the hilt deserved only a production that could match its inherent excessiveness—which, admittedly, could have been a turn-off for some. (Amihan Ruiz and SC Seasico’s versions of Lance’s mother, for example, could easily fit under the definition of “overacting.”)

The singing was also not for everyone. Only a few in the cast were evidently gifted with pipes for musical theater (again, this is a play with music), and the songs weren’t particularly memorable and often felt like removable devices.

But once you acquired a taste for this particular brand of theatrics, there was no denying that “FnL” was a vibrantly staged laugh trip of a show, the camp and histrionics fully realized through Ian Segarra’s direction.

The cast was (mostly) up to the challenge of diving head first into this ocean of farce. Eko Baquial as Lance and Meann Espinosa as Flor delivered more grounded interpretations of their roles, but it was the winning breakout performances of the alternates, Deli del Rosario as Lance and Divine Aucina as Flor, that catapulted this play to lofty, zany heights.

Del Rosario and Aucina fully embodied the ditzy nature of this play—the former spouting the character’s rhythmic hip-hop English without missing a beat, and the latter turning Flor into a hilarious victim of circumstance caught up in a whirlwind of hysterics.

The standout supporting performance came from Pepe Herrera, who slipped into the skin of Jologs with chameleonic ease. The stance, gait and demeanor that Herrera adopted could have fooled the clueless into believing he’s an actual “kanto boy,” to use the Tagalog label.

Michelle Ngu and Yeyin dela Cruz milked charm and comedy out of the role of Butch, who is—surprise, surprise!—the stock lesbian character, and who expresses her love for Flor through serious poetry. Ariel Diccion and Gio Gahol were also quite believable as Beki (Flor’s gay sidekick).

But as much as “FnL” begged to be indulged for its insanity, it also demanded to be taken seriously.

On the surface, it explored the American Dream in reverse: the phenomenon of the balikbayan, as personified by Lance’s family, who become instant celebrities in their part of town and an easy source of liquefiable dollars.

Lance himself typified many Filipinos’ fascination for foreigners (not just Filipino-Americans) with an able command of English and matinee-idol looks that can melt television screens. In the age of Daniel Matsunaga’s Pinoy Big Brother, this could not have been a more timely subject.

Underneath all these, though, a bigger dragon rumbled. The discussion that “FnL” truly wanted to start was two-pronged: the continuing dissection of the Filipino language by different sectors of the community; and the age-old debate on the role and importance of speaking English in the Philippines.

“If we speak English, we achieve progress,” intones Flor’s mother Blanquita (a spot-on sketch of that familiar matronly, bespectacled teacher figure by Kitsi Pagaspas), and that is only the beginning of the lecture.

Perfectly fine; in fact, it wouldn’t be inaccurate to say that, on some level, “FnL” achieved its pedagogical goals to compose an argument and rekindle a timeworn discussion for younger audiences. But the more preachy lines also happened to be the show’s less assured moments, and it begged the question: How does one sustain a comedy?

The second act essentially came off as one extended homily on the purported virtues of speaking English versus Filipino. Too much talk that was chock-full of arguments polemicists and linguistics professors know quite well, and which irritatingly bordered on the academic. It was apparent the show had inevitably stagnated, in stark contrast to a smooth-sailing Act I.

So, to liven things up, it relied on gimmickry. An extended sequence involved Beki teaching Jologs the basic tenets of gay lingo (like substituting the first letter of each word with “j”) and then, Jologs teaching Beki how to count money using terms like “etneb” (P20). It was a hoot to witness the chemistry between those actors, but at some point, one started questioning the necessity of this scene.

Before you knew it, the cast was already gathering onstage for the final song (an eerie resemblance to the Department of Tourism’s “Pilipinas, Tara na!” campaign jingle). One could not be faulted, then, for thinking, here’s another premature resolution to an otherwise crackerjack story—a problem that Peta’s runaway hit “Rak of Aegis” similarly suffered from.

By then, however, one could also very well be too tired from all the laughing to actually complain.