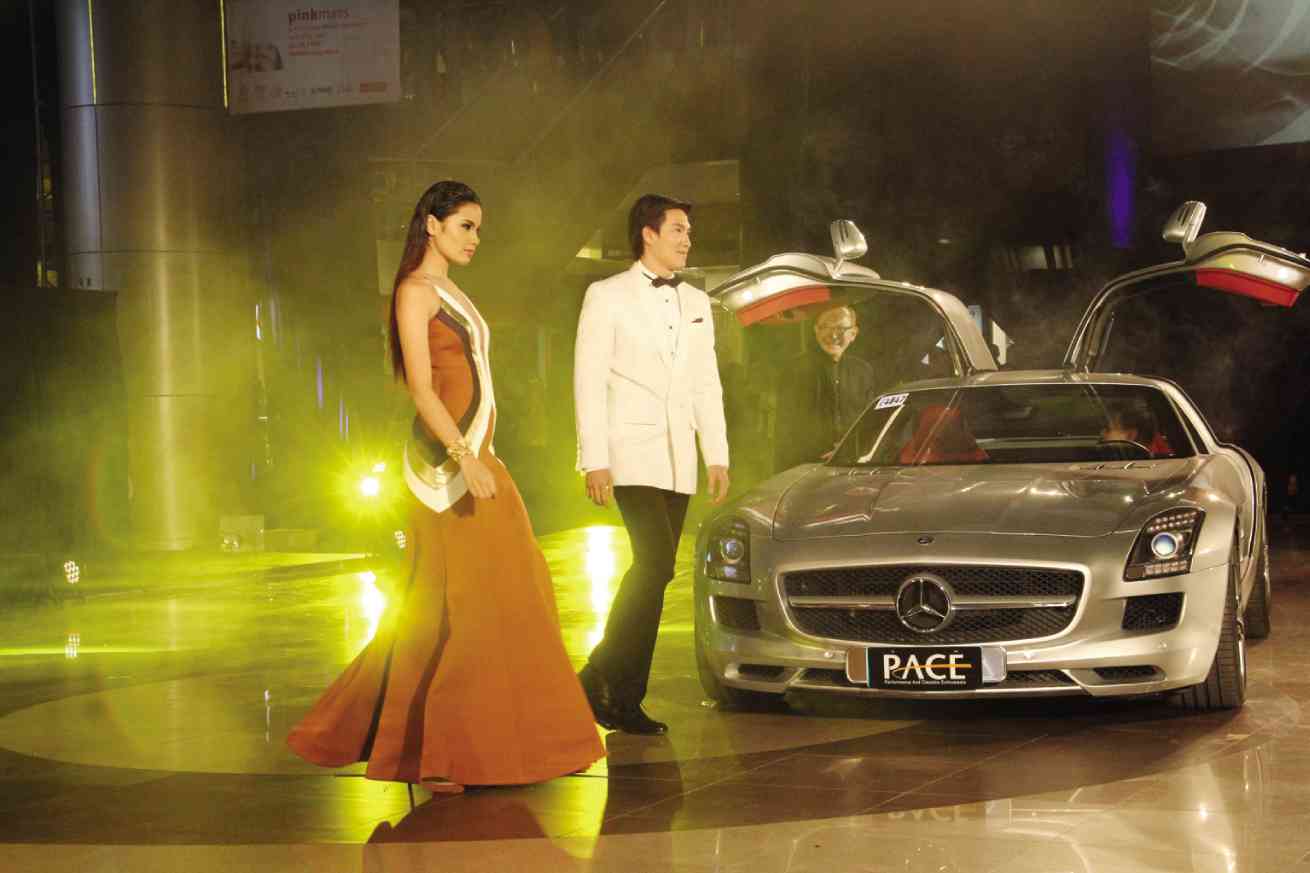 ’GEAR AND GLAM’ begins at the atrium of The Northwing of SM City Cebu.

On a Saturday morning, waiting to board the plane to Cebu, I overheard a man at the next table say, “I’ve spent my money on gambling, drinking and women… the rest I wasted.”

The other men with him laughed. I wasn’t sure if he was kidding, though. But moving on to the trip’s main agenda…

If there’s a lifestyle passion as baffling and as interesting to chronicle as women’s obsession with clothes and bags, it is men’s passion for cars.

This is why I usually love watching the annual “Gear and Glam” show at SM City Cebu’s The Northwing. It showcases these dual passions. And how SM Prime Holdings, Inc. vice president Marissa Fernan pulls it off every year is equally baffling to me.

I enjoy watching design icon and ultimate vintage car collector Kenneth Cobonpue fuss over the cars to be paraded in the show and take centerstage along with his fellow car enthusiasts.

Marissa overcomes a logistical challenge by bringing the cars—this year there are 15 of them, those delicate power machines—onto the lobby.

Last October 9, like she has done the past years, she built a ramp all the way onto the lobby wide enough to load 15 cars.

She also tapped the members of the Fashion Council of Cebu (FCC) to present a few clothes inspired by James Bond. You can’t get more cheeky and macho than that.

I don’t know any other event in the country that gathers that big a number of vintage cars—in a mall.

This is the seventh year of “Gear and Glam,” thus the nod to Agent 007.

Every year, since its start, this fashion show/vintage car exhibit is the most anticipated event at The Northwing, apart from the opening of a miniature Christmas Village.

The vintage car collectors are members of the Performance and Classics Enthusiasts (PACE), a nine-year-old club based in Cebu City formed by guys who share a passion for collecting vintage cars—the classics, in other words.

It doesn’t end there—they drive their sports cars, exploring the Visayas. Their victories and mishaps traveling on the islands could fill a book. They just drove a thousand kilometers for Tour de Cebu.

Its membership only by invitation, PACE now has 20 members—most of them Cebu’s who’s who. Danao City Vice Mayor Red Durano is the president. To be a member, the only requirement is that one owns at least one modern and vintage performance car. Its 20 members have more than a hundred sports cars between them.

The group organizes charity projects focusing on education for elementary public schools in the destinations they frequent. It is a regional partner of the Manila Sports Car Club (MSCC).

And it doesn’t hurt that Fernan herself is a car buff (she loves BMW).

Cobonpue, who lent his Ferrari Dino 246 GTS to the show, talks about his participation in “Gear and Glam”: “It is unique in the country because it depicts luxury and lifestyle in all its facets, from fashion to automobiles to music. And it goes a step further by allowing people to see cars the way they were meant to be seen, rolling on the road together with models wearing various creations in a spectacle of music, dance and design. There is nothing quite like it.”

Directed by Cebu’s leading director, engineer Junjet Primor, this year’s “Gear and Glam: For Your Eyes Only” presented each designer’s mini-collection based on a popular James Bond movie theme and accompanied by the vintage cars.

The show opened with designer Albert Arriba’s collection inspired by the movie “View to a Kill” and paraded with the Lotus Elis driven by model Harold Dee of the Models’ Association of Cebu (MAC). This came with the Land Rover Defender 110 and Mercedes Benz G36 driven by PACE members Harley Yunam and Dr. Peter Mancao.

Jun Escario’s take on “Diamonds are Forever” came next, with the Ferrari Dino 246 GTS driven by Cobonpue.

The youngest and newest member of FCC, Mia Arcenas, came next with her collection inspired by “Die Another Day,” with the BMW Z8 driven by Mike Jo.

Then came the flashy reds—Alfa Romeo driven by Glenn Soco, an MGA driven by Junjun So, and a Corvette C1 driven by Darren Deen—with Edwin Ao’s fashion adaptation of “Golden Eye,” followed by Philipp Tampus’ adaptation of “Moonraker.”

The show’s finale were the Lamborghini Diablo driven by Durano and the Mercedes SLS driven by Harold Ong Badilles, shown alongside the collection of Philip Rodriguez, inspired by “Goldfinger,” one of the most iconic James Bond films of all time.

The 32-piece SM Cebu Orchestra—yes, this is one mall development that has an orchestra—played the soundtracks of the Bond movies, with dances by the University of Cebu Dance Company, Disco Jammers, Knapsack Dancers, DanceSport’s Anselo and Desiree, and the Cebu Gymnastics Team.

Durano said of the show: “James Bond movies are the epitome of where cool cars and high fashion are part of everyday life. The members of PACE are very excited to be part of this extravaganza where one of the most iconic characters in the movie industry is honored.”

The vintage cars and the clothes went on exhibit at The Northwing Atrium after the show, and the exhibit steadily drew crowds.

This was the grandest, most elaborate “Gear and Glam” production, which might just be surpassed by next year’s show when it moves to its new home—the SM Seaside City Cebu.

The grand opening of SM Seaside City Cebu is the event to watch out for in 2015, in Cebu and perhaps in the country. (Why not? These are the people who drive vintage cars onto the runway.)

By the way, Cobonpue is now the head of Industrial Design at De La Salle-College of Saint Benilde.