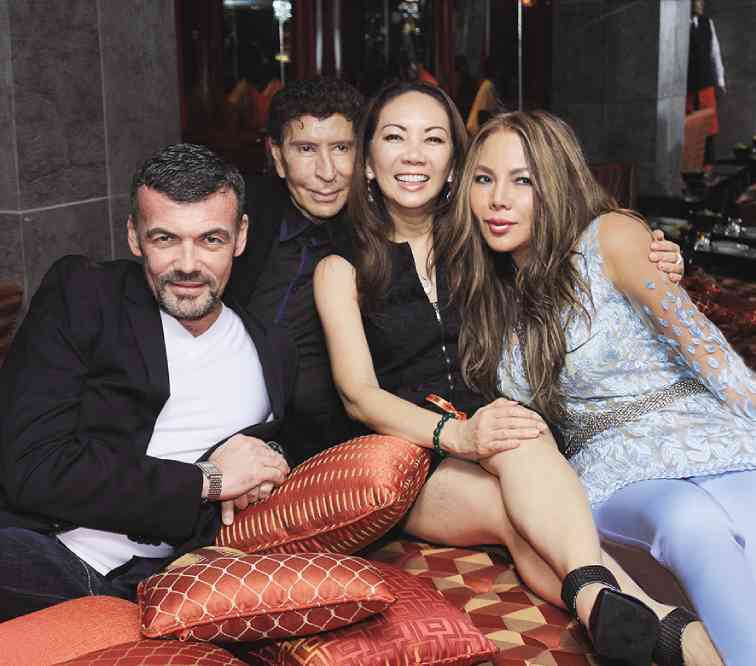 I couldn’t help gushing over its trés chic modern Moroccan and south of France-inspired interiors—done by international socialite Tina Cuevas.

Dos Lunas’ exotic vibe offers a refreshing alternative to those looking for a double dose of fun in their nightlife. One can have a great time unwinding at the bar while taking a puff of authentic Persian shisha with a choice of flavors; and many of the 400 guests at Dos Luna’s launch took note of its relaxing ambience amid live music.

In case you want a little change from your comfort zones in Makati, go to Dos Lunas to experience the other side of Quezon City.

High-flyers, stakeholders, movers and shakers from airlines, hotels, resorts, the diplomatic and consular corps of the Philippines, as well as respected businessmen attended the annual event to celebrate the “achievements of exemplary individuals” in the tourism industry.

Joseph and awards committee chair and director Jimmy Bautista presented the prestigious awards to Iglesia ni Cristo executive minister Eduardo V. Manalo for Tourism Infrastructure of the Year; Lance Gokongwei for Airline Personality of the Year; Gina Lopez for Environment and Agri-Tourism; and Christine S. Dayrit for Skålleague of the Year, among others.

The guests had their fill of excellent wine and a divinely prepared dinner, palangga.

Have you heard, dahlings, that there’s another new place for great music and dancing at Resorts World Manila? Universe Gastrolounge and Nightclub recently opened its doors to the public with “Axe presents R3hab Live in Manila.”

Select guests were treated to overflowing drinks and pica-pica, special performances, and a glimpse of the Axe Gold Pass winner, model LA Aguinaldo.

Aguinaldo’s prizes include a weekend trip to Las Vegas with two of his friends; a brand-new 2014 Volkswagen Beetle; and a one-year condominium unit lease in Bonifacio Global City.

R3hab played his popular mixes like “Sending My Love,” “Ready For the Weekend” and “This Is How We Party.”

The Universe is unique in the sense that it’s a full-size club and a cozy lounge in one. It also serves delicious, filling cuisine from Filipino, Japanese to Italian, all at reasonable prices.

“At night, the gastrolounge transforms into a mini-club,” says Chino Lui Pio of Universe, “a place that’s still cozy enough, with not-too-loud music by Manila’s top DJs. With its themed nights, which are “Timeout Tuesday,” “Panic At The Disco Wednesdays,” “Thank Got It’s Thursday,” “Finally Friday” and “Don’t Stop” Saturdays,” there’s always something new to look forward to every night.”

“Chicago” is one show that I’ve seen twice on Broadway and the West End, dahlings, and surely I’ll be watching it again.

The sensational, sexy and slick musical will dazzle Manille when it premieres at The Theatre at Solaire Resort and Casino on Dec. 2.

The strictly limited season of “Chicago” is presented by Visa and Smart Infinity, in cooperation with Solaire Resort and Casino.

It is renowned for its exhilarating choreography by the legendary Bob Fosse, with a sizzling score from Broadway icons John Kander and Fred Ebb.