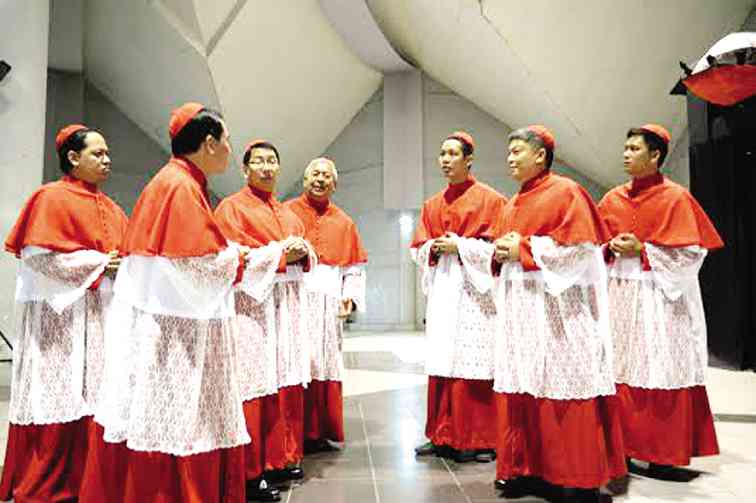 CARDINALS anxiously discussing the new Pope—a scene from “Pope Francis The Musical,” which will have its world premiere on Dec. 12. PHOTOS BY NIGEL IAN LAXAMANA AND JOJO LIM

Quite aptly, a homegrown musical heralds the Jan. 15 arrival of Pope Francis I in Manila.

“Pope Francis The Musical” will have a gala today, November 29; world premiere on December 12, Friday; and final performance on January 10, 2015, Saturday—all at 7:30 p.m., in Holy Angel University, Angeles City, Pampanga.

The theater piece is a collaboration of Pampanga artists Andy Alviz and Randy del Rosario. It is the maiden venture of Teatru Kapampangan, a grouping of ArtiSta.Rita and Pampanga’s clergy and laity.

In impressionistic vignettes, it tells chiefly in songs the story of Pope Francis from his youth in Argentina through papacy in the Vatican to his visit to San Felipe, a fictional parish in the Philippines. At its core is “the formation of conscience—the battleground in evangelization.”

It is based on known facts from available materials, mostly from the news and the Internet, says Alviz. It doesn’t spare the controversial parts, such as the Pope’s denunciation of the Mafia.

“We conceptualized this long before news of his coming to the Philippines broke out,” says Alviz. “I was attracted to his being very modern, his breaking of tradition, his love of the youth.”

Written in English with snatches of Spanish and Latin, with 24 original songs composed by Alviz with lyrics by Del Rosario, the musical has a cast of 50-60 played by nonprofessional actors, including five priests, business people, students.

“Ang ganda ng composition ng cast,” says Fr. Ric Luzung, who plays the younger Pontiff from the time he was still Jorge Mario Bergoglio until his ascent to the papacy.

Alviz has 30 years of involvement in theater. His passion for the arts must be inborn, he says, because though he had medical studies for training, he eventually turned to theater. He later learned his mother was a sarswelista in her youth.

While in college in University of Santo Tomas, he joined the dance troupe Salinggawi. His craft was honed at Metropolitan Theater. He studied arts and culture in New York, London, Sydney, Japan.

On returning to the country, he established Whiplash Dance Company. For a time he was a choreographer for Atlantis Productions and the resident choreographer of “Miss Saigon” for its run in Manila.

At age 37, however, he experienced what he calls “a midlife crisis—not necessarily an epiphany. I was doing mostly adaptations of Western materials, franchise musicals, so I decided to do something original for community theater.” After 25 years of living in Manila and abroad, “my feet led me back to Pampanga.”

In 2002, he founded ArtiSta.Rita, with the goal of reviving Kapampangan culture through the preservation and production of Kapampangan theater and music. The group is based in his hometown of Sta. Rita, 10 kilometers from the capital San Fernando City. It started with 100 members, and now has an ensemble of some 50 local singers and performers.

The group performs Kapampangan zarzuelas, original musicals, and has done concerts in the United States and the Cultural Center of the Philippines. Alviz says they have mounted about 20 productions in 12 years. He has released several albums of Kapampangan songs, most of which he composed with lyrics by Del Rosario.

He says conceptualizing a production, composing the music, choreographing the numbers and directing the cast comes easy because “it’s already a passion, it just slides.”

What he calls “original Kapampangan zarzuela” is actually a composite of traditional ditties, such as about farming or love, which he shapes into a narrative, like the West End musical “Mamma Mia!”

An acclaimed production is their annual Lenten presentation of the pasyon, “Tulauk ning Manuk,” an original piece of environmental theater he created. Father Luzung plays the role of Jesus Christ. Alviz, in fact, wrote “Pope Francis The Musical” with Father Luzung in mind.

“Singing is the new trend in the Church,” says Father Luzung. “During fund-raising, we entertain them instead of just do solicitation. Siguro nabalitaan ni Andy that I could sing, so he recruited me.”

He has had big reservations about joining this musical, though. Alviz had to approach him thrice before he could be convinced.

“I had inhibitions about acting,” he explains, “and I could hardly dance. Pope Francis is a good dancer. It’s just as well I have to dance only once here. Thanks to PE [Physical Education] ballroom dancing in college, I’ve learned the basic steps.”

His voice projection and vocal stylistics also became a problem.

“Nasanay ako sa pop songs,” he says. “I have to change gears because Andy wants the classic Broadway approach for this one. And I have to sing six songs, four of them solos. Konting hasa lang, konting tiyaga lang sa pag-practice.”

Sponsor San Miguel Corp. gave them a P1-million budget, most of which goes to costumes.

Authenticity is important, says Father Luzung, because churchmen are expected to be watching the performances—and they would know at a glance if the fabric used for the cardinal’s habiliments or zucchetto is cheap.

With a minimal budget, Del Rosario says they can’t afford to have alternates for the major roles. Each has to be familiar with the lines or songs of the other so that when one cannot make it on the playdate, someone else can take over the role. (Just pray no one will catch colds on the gala.)

Alviz says the hard part is the rehearsal process, particularly with a big cast of nonprofessional performers, most having day jobs.

He says community theater used to be alive in the provinces, but Manila movie studios started absorbing its stars, such as Rogelio de la Rosa from Pampanga and Peque Gallaga’s ensemble from Bacolod.

The power of community theater lies in the rawness of performance unleavened by technique, and an honesty of portrayal not rendered bland by polish.

In fact, among our most memorable experiences of theater were from community theater: Lutgardo Labad’s rendering of the Dagohoy Revolt performed at the altar of Loboc Church in Bohol 15 years ago; and Vigan City Hall staffers singing away the lamentation of Diego and Gabriela Silang at the atrium of a hotel early this year.

Somehow those renditions have the power to make the hairs stand on end, that the polish and technique of professional theater can hardly improve. In “Pope Francis The Musical,” this can mean a simple song like “I Am a Priest.”

“Can you imagine, he’s already a Pope and he is saying he’s only a priest?” says Father Luzung in a tone close to amazement. “I am most attracted to his humility and simplicity.”

He says doing the role is a struggle on his part as he has to fit four months of rehearsals into his liturgical duties, his schedule as dean of studies in Mother of Good Counsel Seminary in San Fernando City, and meetings as executive secretary of the physical-arrangement committee of the Catholic Bishops’ Conference of the Philippines in its preparation for the papal visit.

“But when you think of it as a sacrifice, a contribution, then magiging madali sa ’yo,” Father Luzung continues. “It is the sharing of your God-given talent—that’s the Gospel today.”

He means the parable of the talents: To him who makes good use of his gift, more will be given.

“Pope Francis The Musical” is presented by Holy Angel University in cooperation with San Miguel Corp. Part of the proceeds goes to Teatru Kapampangan’s beneficiary, AeTahanan, a dormitory for Aeta students going to college.