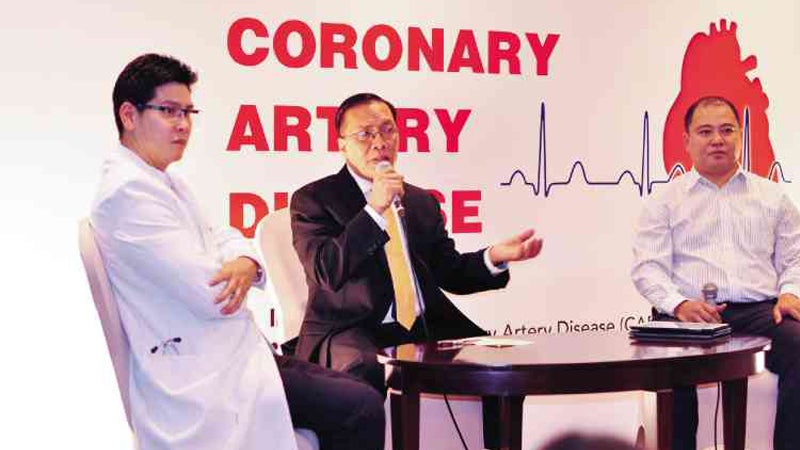 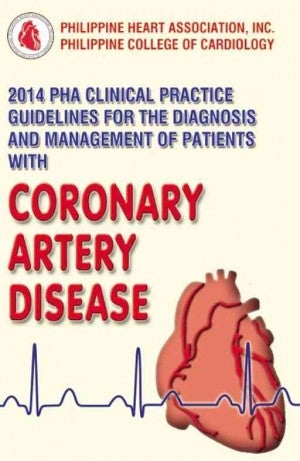 That’s a mortality rate way more than those caused by typhoons that hit the country every year. Yet, like a thief in the night, cardiovascular disease quietly sneaks into our homes and hospital beds, snuffing the life out of 19 Filipinos each hour.

These are the deaths that do not make headlines, but diseases of the heart and the vascular system have remained the top two causes of death in the country since 1993.

The alarming rise in death rate attributed to cardiovascular diseases has prompted the Philippine Heart Association (PHA) to release an updated guideline on treating and managing heart disease in the book, “2014 Philippine Clinical Practice Guidelines for the Management of Coronary Heart Disease,” now available on print and soon to be released as a downloadable e-book on PHA’s website.

The book—written by experts in the fields, with some entries borrowed from the world’s most respected guidelines such as the American College of Cardiology and the European Society of Cardiology—will address specifically the scope and limitations of heart heath care in the Philippines.

It is written by doctors for general practitioners, family physicians, ER doctors, nurses, internists, cardiologists and other medical personnel, with the latest proven recommendations classified as “strongly recommended,” “recommended,” and “may be recommended” for specific treatments and modalities.

“So many times these are easily forgotten; that’s why some medical practitioners carry guidelines in their pocket. If you don’t have a guideline, that would be like not having a roadmap when traveling. You may reach the destination, but you are unaware that there are better ways to get there. Sometimes you can even get lost—at the risk of the patient’s life,” said Dr. Joel M. Abanilla, PHA president.

Think of the guideline akin to an ER triage in which, upon suspicion of a heart attack, the attending medical team can accurately differentiate the three major coronary arteries, and are more confident and knowledgeable in making critical decisions.

“Anyone of you can have a heart attack. This is a very deadly disease. Mortality rate for a heart attack that is poorly managed is very high. This guideline is all about improving the quality of health care we have in the Philippines,” Abanilla said.

Coronary artery disease (CAD) is caused by plaque buildup, cholesterol deposits that narrow the coronary arteries, or blood vessels in your heart. This buildup happens through the course of several years. When arteries become hardened and narrowed, limiting and constricting the amount of oxygen that flows into the heart, a heart attack may occur.

“At age 20, our arteries are smooth; there would still be no blockage detected. Then it starts to build up. As we grow older, cholesterol deposits go to blood vessels, and the plaque grows bigger. If we are neglectful, we start to feel its symptoms,” said Dr. Victor L. Lazaro, PHA chair.

If your chest hurts

One of CAD’s symptoms is a chest pain that is exacerbated with activity. If your chest hurts after strenuous physical activity, the kind of pain that refuses to go away minutes after you’ve supposedly properly rested, then chances are you have CAD.

Other symptoms include shortness of breath, fatigue and heart attack. Heart attack usually exhibits symptoms of a crushing pressure in the chest, pain in the arm or shoulder, and sweating. For some women, they may experience back or jaw pain and nausea.

When heart attack occurs with no symptoms at all, it’s called myocardial ischemia. This is typically what happens to endurance athletes, a condition that occurs when blood flow to the heart is decreased by blockage in the coronary arteries. This is why, Lazaro said, even health buffs must get themselves routinely checked for coronary diseases.

There are nonmodifiable and modifiable factors that contribute to CAD. Nonmodifiable includes aging. Your risk for CAD increases as you age. For males, CAD is developed between 40 and 45 years old; for females, it’s between 50 and 55 years old, Lazaro said.

“When females reach menopause, their chances of developing CAD will equal that of the male,” Lazaro said. However, the modern lifestyle of women is now closing in that gap. Other nonmodifiable factors include family history.

If detected early, heart attacks can be significantly less fatal. Abanilla said if patients know that they have to seek treatment within the six-hour therapeutic window, and the medical team attending to them knows what to do, then their chances of surviving will improve.

The problem here is most people seek medical attention after experiencing symptoms for at least two hours. With the kind of traffic we have in the metropolis, said Abanilla, these patients might lose their therapeutic window. This is even made worse if the patient happens to be whisked to the hospital by an improperly equipped ambulance.

“We want people to know that there are options. There are antithrombotics that you can give outright, even in the ambulance or ER, that can improve survival by as much as 20 percent. What happens is when patients go to the hospital, these agents may not even be available. The staff is not aware of their importance,” Abanilla said.