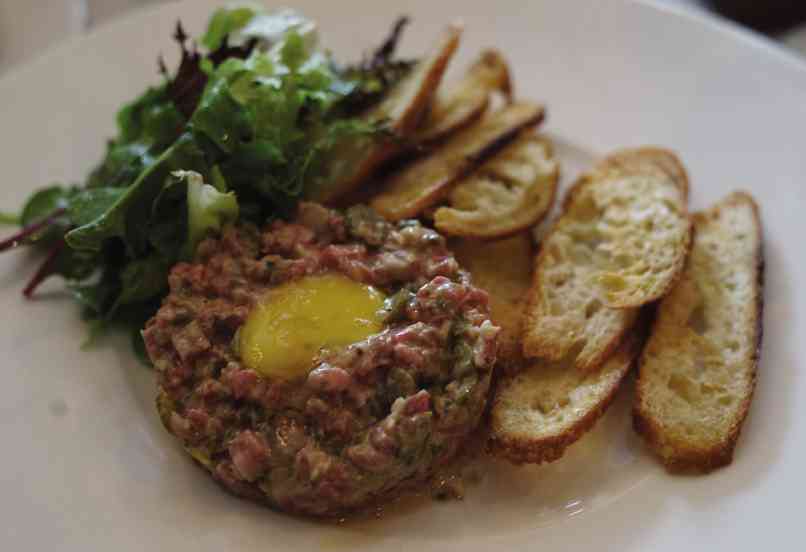 The last time I ordered steak tartare in a Manila restaurant, the server asked me if I would like it rare, medium, or well-done. I have not been back to that restaurant, not because of the understandable gaffe of new waitstaff of a newly opened restaurant, but because the steak tartare, as well as most of the meal, could barely pass muster as French food—or, for that matter, as food.

It came as a surprise that the Moment group, which has gained a reputation for being consistently in on the zeitgeist and for its business savvy, would take on the classic French bistro. These are the people behind ’Cue, 8 Cuts, Q-Daddy, Phat Pho, and are the funders of Bruce Ricketts’ Mecha Uma.

They’re the Triple-V or Larry Cruz of their generation, with plenty of social and financial capital on hand. Instead of unlimited tempura or nostalgic Spanish-theme cafés, they trade in upscale casual restaurants that reflect the preferences of this generation: Japan, Vietnam, California.

I’m not sure if they’ll appreciate this comparison, but my point is that they aren’t upstarts anymore, they are a full-fledged restaurant empire.

There isn’t necessarily anything wrong with that, although it makes the field harder for independents (who have to learn on the job, expensively, when they put up their first restaurant). Their muscle gives them not just the opportunity, but the responsibility, to themselves and their customers, to put up restaurants that are interesting and noteworthy, aside from being financially lucrative. It’s possible to put up an empire of dink: I know at least one group whose restaurants are all third-rate overpriced foreign imports.

Like all of the more recent Moment group projects, the place had been fully operational and running on well-oiled wheels since the start. The service was excellent, whether it was to gently turn away the crowds on a Saturday night or to serve a packed house on a Sunday.

The surprising thing about their latest concept is that there is none: It isn’t pretending to be a roadside Vietnamese food stall, or asking the customers to grind their own burger from various cuts of meat.

It really is, simply, a classic French bistro, with a bit of traditional bistro kitsch and beautiful antiqued mirrors.

It’s a classic without a twist: Paris-come-to-Manila by way of Singapore, where the original behind the franchise is located.

We started with onion soup, and progressed through steak tartare with an extra serving of fries on the side (it came with little rusks of bread), a braised lamb shank, and finished with a pear galette and crème brûlée.

All these were delivered faultlessly and competently, but in execution hit the ceiling of good-but-not-great that seems to characterize French food served in Manila.

In this instance, however, what kept flawless, perfectly executed favorites from being luminous was distance: Everything seemed to be aloof rather than immediate.

At 8 Cuts, for instance, which everyone should try, there is a connection with the food. That is missing here.

There are thousands of bistros like these in Paris: neighborhood places, some better than others, that are not driven by a fanatically perfectionist or creative chef, but are there to wander down to with friends, and sit elbow-to-elbow with other people from the quarter, and, inevitably, one very lost-looking American tourist.

I don’t know how tied they are to the franchise menu but it seems like a wasted opportunity not to go upscale: oysters and foie gras sell a restaurant; slow-cooked meals in marmites don’t do as well, as the late lamented Lumière discovered.

Despite my apparent lack of enthusiasm, it’s still a restaurant I’m happy is around, rather than not. There’s a certain generation for whom spending time in Paris as a young man stays

with you as a moveable feast, or at least follows you to Rockwell, as Hemingway didn’t say.

But for current generations whose coming-of-age stories are set in Shanghai, in Taipei, in Kyoto, or in Singapore, the nostalgia may not be there.

Bistro du Vin must stand on its own merits; and as much as I love simple, uncomplicated food, I also like élan, éclat, and a je ne sais quoi which this restaurant needs a little more of, and which, importantly, it could still achieve.

Nevertheless, bravo to the Moment group for flying the flag for the traditional French bistro, and if there’s anyone that can make it work on the local dining scene, it’s them.