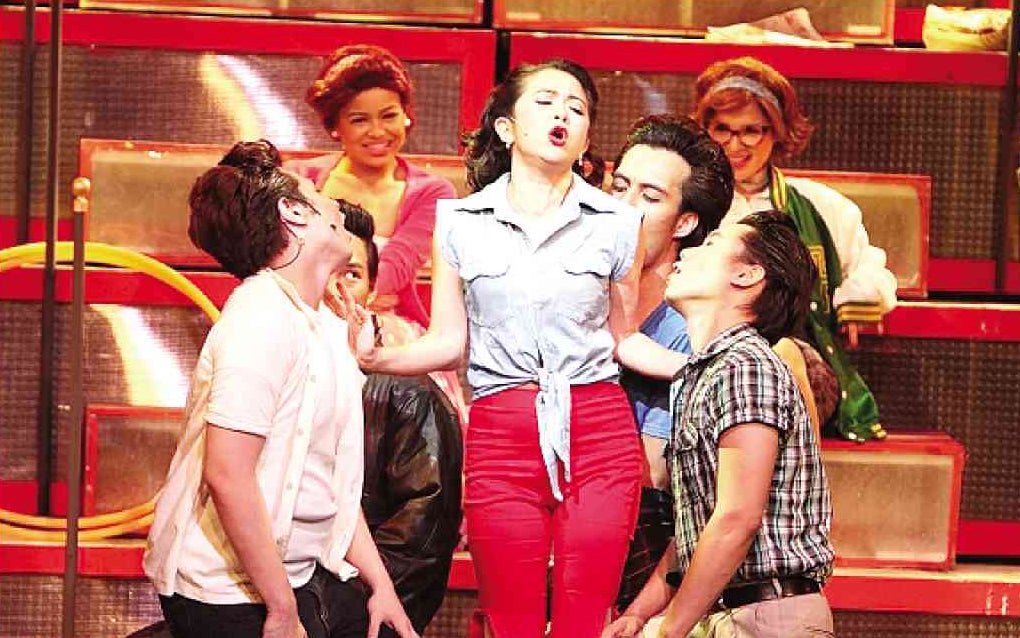 “Grease” is fun but never easy to make. Because of its big cast and series of signature songs, it has become a challenge for every director who decides to work on “Grease” to tweak and rework the musical without losing its feel and essence.

In other words, 9 Works Theatrical’s production of “Grease” at the RCBC Theater in Makati—directed by Robbie Guevara and led by former teen star Antoinette Taus as the cool and seemingly sophisticated Betty Rizzo—has its work cut out for it.

Did they ruin my “Grease,” or were they able to hold their own by weaving their unique brand of magic into such a well-loved and classic musical set in Rydell High sometime in the 1950s?

I’m happy to say that far from ruining it, Taus and company exceeded expectations and rose to a number of challenges, including an exceedingly small stage and presumably limited budget.

If there are two good reasons to watch this “Grease,” it would be Taus, who proved to be a revelation with her on-target characterization and pitch-perfect singing, and the younger, less experienced Tippy Dos Santos as female lead Sandy Dumbrowski.

Blessed with loads of stage presence, the pretty Dos Santos also has the pipes to lend justice to her spot numbers. She totally owned the stage as she sang “Hopelessly Devoted to You.”

He may not be as riveting as John Travolta, but Guji Lorenzana’s more down-to-earth rendition of male lead Danny Zuko also proved likable.

Since probably no one can be as dashing and larger-than-life as Travolta during his prime, Lorenzana tried to do the opposite by being more self-effacing in his approach to his character. The push and pull between sure and unsure made for quite an engaging performance.

But Taus and company’s efforts to shine on stage would have been dimmed without an equally talented and committed cast of supporting actors led by Rafa Siguion-Reyna as Kenickie, Peachy Atilano as Frenchy, Sarah Facuri as Jan and Alexandra Godinez as Marty, among others.

In fact, “Grease,” given its underlying team of high school camaraderie among a bunch of rebel misfits during a supposedly more innocent time, is one of those productions that require a strong cast of supporting actors for it to work.

For one, the choreography is big, bold, fast and quite demanding. Groups scenes and, if you will, split screens are plenty. And with spot numbers for almost every character, “Grease” offers its actors plenty of opportunities either to wow or show the audience their weakness.

To Guevara and his collaborators’ credit, including choreographers Arnold Trinidad and Francis Matheu and musical directors Joseph Tolentino and Sweet Plantado, they were able to maximize the musical’s unique features and requirements by assembling a good cast and honing each member to shine in solo performances while still being able to blend seamlessly in group numbers.

We were also lucky to catch JM Rodriguez as the evening’s Teen Angel. With his beautiful voice and seemingly ad hoc performance style as Frenchy’s inner voice, the veteran stage actor and singer showed both colleagues and audience alike what real acting in a musical is all about.

We caught the press night of the show, and during the postshow Q&A, Rodriguez and the rest of the cast egged on Martin Nievera, who was in the audience, to do Teen Angel. The Concert King said that his November schedule was already full, but his December was still open.

It would be a treat to see how he puts his own stamp to the role.