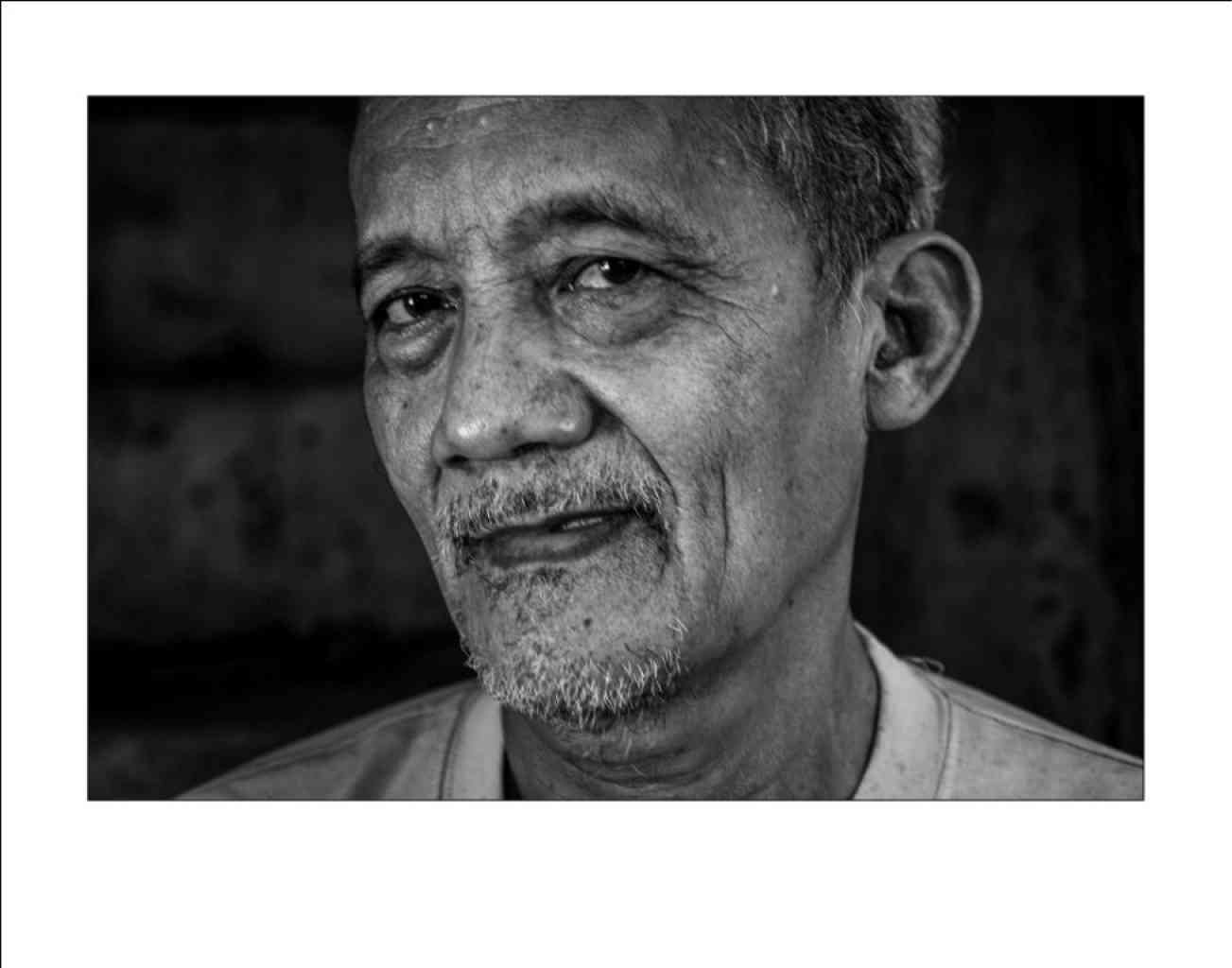 THE day was February 18, 1976, and Crispulo Migriño was among the 70 passengers on a bus bound for Mindanao.  Suddenly the bus was strafed with bullets coming from both sides of the road. Bandits!

Migriño dove for the floor and lay there, thinking: “I have to survive; I have a young family to take care of.”  He wound up bargaining for his life: “If I survive this tragedy, I will dedicate my life to family and country,” vowed this future community organizer for the elderly.

Of 70 passengers, 35 died while 30 suffered serious injuries, including Migriño who now walks with a permanent limp because bullet had hit his leg.  In one of the densest urban poor areas in Metro Manila,  he shares a home with his wife, a widowed daughter, and her three children, two of them disabled because of polio and an accident.

Despite a busy life, Migriño has not forgotten the vow he made on the blood-soaked floor of that bus. Today, he calls himself a “community gerontologist,” a title often shortened to CG which, his fellow women volunteers cheerfully clarify, does not stand for “call girls.”

But the group is on call—to check the blood pressure, take the vital signs, check blood sugar, prescribe herbal medicines, give a massage or acupuncture—and generally  monitor the health of old folks in the area.

“There we were every morning, my wife and I, wheeling the kids to the local school while their mother went to work.  Maybe we were a funny sight—one disabled old man bringing a disabled child in a wheel chair,” says Migriño of his daily routine. 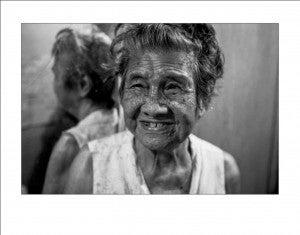 But grandchildren Charlene, 18, and Victorino, 19, insist it’s an “inspiring” sight, one that motivates them “to do the same for others” despite their being wheelchair-bound.  They’re probably on their way to doing just that, as their grandmother proudly waves the armload of medals and certificates their three grandkids have collected from school.

Migriño is a member of the council of elders of COPAP, the Confederation Of  Older Persons’ Associations of the Philippines, a sister organization of the Coalition of Services of the Elderly (COSE).  Now on its 25th year, COSE recently launched a booklet and held a photo exhibit titled “Uliran” by world-class photographer Ric Rocamora that featured 25 older people selected to reflect the impact of the elderly on the community.

Among those featured in the exhibit was Remedios Lucido, the first organizer of older people in the Commonwealth Ave. area, who describes her organizing work as “very satisfying,” since they “could hardly keep up with requests from older folk who wanted to be organized.” Also featured was Ofelia Hispano, a caregiver for the home-bound elderly, CG Rosalito Casais, and Presentacion Capistrano who says her volunteer work involves “helping change ideas on ageing.”

More than just caring for their fellow elderly, these CGs also launched a campaign to have supportive House representatives pass laws that would give a small pension to elderly folk who belong to the “poorest of the poor.” The campaign involved collecting signatures, button holing Congressional representatives,  seeking out supporters and organizing demonstrations.

“We are out here so that you’d know we are still strong and willing to struggle for our rights,”  Aling Luding (Leodegaria Buñales) recalls saying during a street demo.

Of her encounter with supportive legislators Edgar Lara, Ed Zialcita and Sen. Pia Cayetano, Anita Gonzales says, “I never thought that someone like me who only reached Grade 3, would be able to discuss what concerns us with high-level people like senators and people in Congress.”

But talking to senators and House representatives may not be half as challenging as organizing the elderly back in 1989 when COSE was founded in the Commonwealth Area of Quezon City, which probably has the largest concentration of urban poor in the country. The combination of traditional respect for older people plus a lack of opportunities for them to continue to participate meaningfully in society proved to be the key ingredients for the movement to expand rapidly—from the Commonwealth area to other parts of the Metro, neighboring provinces and later, around the county.

The greatest expressed needs were for health care and economic sustainability, which would later lead the elderly to become community health workers, with generous support from the newly-founded St. Luke’s Geriatric Center.

Income-generating activities came next, with supplemental management skills training in bookkeeping, marketing and related fields. Fortuitously, a multinational bag manufacturing company (Case Logic) needed a place to dump excess foam rubber and scrap materials, which the elderly refashioned into pillows and bags of all sizes. When using scissors proved too painful for arthritic fingers, one inventor fashioned a lever-type chopper that proved more convenient and easier to use. Division of labor became the default mode, with individuals developing expertise in specific areas—cutting, sewing pillow cases, stuffing, marketing, etc.  At one point, one group sold more than a hundred pillows to a newly opened hotel.

Once, when I saw an older person balancing across his shoulders a long pole hanged with pillows, I had to ask: “But why are you selling in this urban poor area and not in the more affluent markets?”

Indeed, working with older people turned out to be a series of lessons learned. Sometimes the lessons are not too palatable, but they are all too real and grounded.

Once I told Aling Presing (Presentacion Capistrano) that we in COSE were in favor of then President Estrada being impeached.  She said in response: “You people always think of the important things in life… love, justice, human rights… we in the squatters area, think about our houses not being demolished and water coming through the pipes…”

Through the years, COSE also learned through the elderly what really needed in life.  From simple primary health care, a Burial Fund was established, which involved collectors, record keepers, remittances, etc. Hot issues arose during monthly meetings, which showed how the elderly remained a thoughtful lot despite their advanced years.  A lot of questions came up: How about those who cannot attend meetings?  Does the age have to be 60 for one to join the organization? How about backlogs?  And so on.

Working on a bill for pensions for the destitute elderly had the group traveling to the Senate to confront then Sen. Edgardo Angara who had initially objected to the proposal.  When the bill passed but lacked the signature of then President Arroyo (who had been warned by the Finance department about a lack of funds), 2,000 members of organizations for the elderly gathered around the statue of Chino Roces on Mendiola dawn of Valentine’s Day 2010 to serenade the President. She signed that very afternoon.

Fund-raising became another priority and here the elderly again showed great creativity.  One group solicited ingredients for a gigantic cake from shops in the area. When the cake was baked, another group sold slips of paper as raffle tickets. The initiative raised a fairly large sum. Best of all, the raffle winner donated the cake back to the organization. Talk about having one’s cake and eating it too!

A number of times, older people have been asked which programs they considered crucial to them. But instead of the expected answers “economic”  and “health,” they invariably said, “social.”  Older people enjoy first and foremost being with other people.  In fact, even economically well off older people in the West complain of loneliness.  They need another reference group besides the family.  Thus the elderly groups here organized beach parties, with 28 full buses traversing the North Luzon Expressway at one time, headed for the beach in Subic. Then there are the common birthday celebrations every month, the aerobics every Saturday morning, and the dance contests. When Minerva Laudico was the elderly’s sectoral representative in Congress, the foyer of the House of Representatives was made available to older people on weekends.

One promising idea that never quite realized its full potential was the Group Home, the answer to the elderly’s fear of being institutionalized.  The Department of Social Welfare and Development and COSE experimented with the concept of a Group Home, where older people would care for each other and interact with the larger community.  Three Group Homes were subsequently established (through the kindness of Freedom to Build) in Novaliches and San Jose del Monte.  Former President Arroyo issued EO 104 to establish Group Homes in every municipality, but none had been established and the existing ones proved difficult to sustain.

Looking back over the 25 years, it has not been uncommon to hear older people say “I didn’t think I could become a health worker” or  “teach a class,” or “talk to a senator.”

In short, older people, even at age 60 and 70 came to a self-realization of their potential. Beyond the program for health, income, burial, etc.—seeing older people become what they had hoped to be (or sometimes what they had never imagined possible) has given the greatest sense of satisfaction to us in COSE. Contrary to media images of people rejecting age and resorting to lotions, pills, surgery and injections to look young again, organized older people have confirmed the teachings of all major religions: Life happens in stages. Each stage is important, and each builds upon the former stage. •