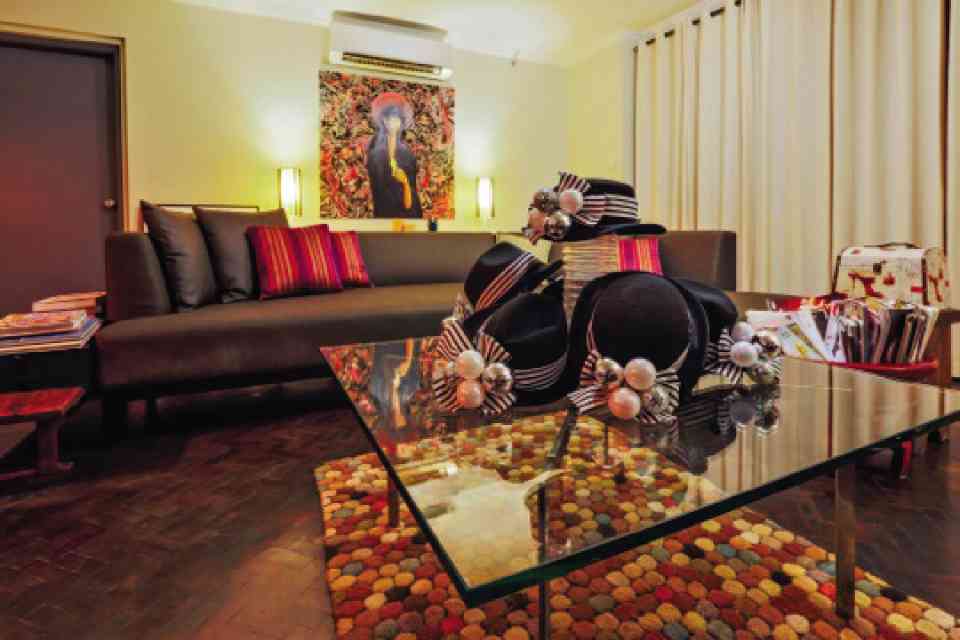 LESS is more for Reyes. For Christmas decorations to have an impact, they should be grouped together following a certain theme and color scheme, not spread all over the house.

Why James Reyes’ Christmas is black and white

Fashion designer James Reyes, who shares a condo unit with his partner, grew up in a compound in Cubao with aunts who literally took a hands-on approach to decorating.

“They were all like Martha Stewart,” he says. “Months before Christmas, they would start making their own decorations.”

One aunt, who was good at crocheting, would fashion holiday-theme dolls. Another would gather fallen branches and twigs and paint and spruce them up.

Reyes believes that one should have a “concept” before one starts decorating.

“If your decorations are well-organized, you need not bring them all out,” he says. “Guided by the concept you have in mind, you take out only the ones you think are useful.”

Reyes is partial to black and white—nontraditional holiday hues—which he then spruces up with Christmas balls in white, silver and sometimes champagne.

“I even have a black Christmas tree made of plastic bristles that I bought from Dimensioné four years ago,” he says.

Reyes’ preference for black and white springs from his love of Christmas balls that resemble iconic disco balls so popular in the ’70s.

“I don’t know why I love them, but these mirror balls go well with black and white,” he adds.

Reyes is also fond of finding new uses for old objects. Since he began to dabble in costume design a few years ago, Reyes has started to accumulate accessories.

After doing the costumes of Tanghalang Pilipino’s “Death of a Salesman” recently, he acquired black fedoras, trilbies and bowler hats.

For this shoot, he brought them out and decorated them with Christmas balls and leftover white ribbon with black stripes.

He also fashioned a wreath of roses from white computer paper and glossy magazine pages.

Instead of gift wrappers, Reyes uses glossy magazine paper and product catalogs to wrap his Christmas presents. Even his origami-inspired ribbons and bows are made of recycled paper.

“I haven’t used store-bought wrappers in a while,” he says. “The key to making your décor and gifts different is to make them look artsy.”

Reyes believes that less is more. To keep your home from looking like a Yuletide bazaar, don’t embellish or line every area with lights and Christmas trimmings, he advises.

“It’s common to see houses with door frames and handrails lined with balls, trimmings and artificial poinsettias,” he says. “Even their bathrooms have Christmas tableaux. I think that’s too much.”

If you don’t confine your decorations to key areas, and opt instead to decorate almost every corner of the house, the opposite happens. You lose the effect!

“Miniature Santa and angel collections can be cute,” says Reyes. “But they would look better and have more impact if they were grouped together rather than spread out all over the house.”

“Some Christmas décor look better with time,” says Reyes. “They acquire this antique finish that lends them character.”