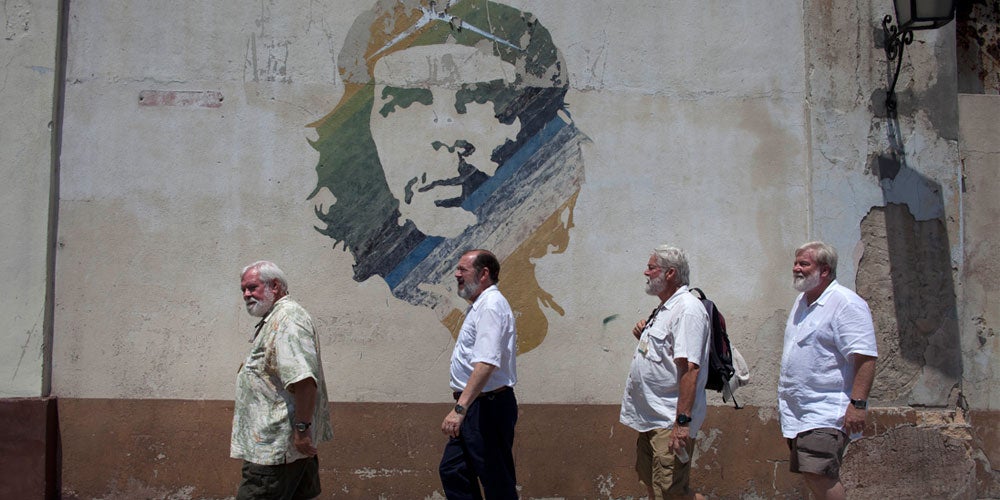 Men who look like the late American writer Ernest Hemingway pose for photos as they walk past a mural of Cuban revolutionary hero Ernesto "Che" Guevara after visiting a rum museum in Havana, Cuba, Saturday, June 22, 2013. AP

HAVANA, Cuba — The youngest son of Cuban revolutionary Che Guevara has opened an agency offering two-wheel tours of the Caribbean island nation on Harley-Davidsons, in a nod to his father’s passion for motorcycles.

The trip, spanning from December 1951 to July 1952, took the 23-year-old revolutionary to Argentina, Chile, Colombia, Peru and Venezuela.

Now, Che’s son Ernesto Guevara wants to honor his father’s famous ride by giving visitors to Cuba a “unique” trip through the country on Harley-Davidson motorcycles.

The itineraries give visitors a glimpse of “the varied landscapes of this beautiful island,” while also offering “intimate contact with a part of the history of a unique revolution,” according to the website of La Poderosa Tours, run by 49-year-old Ernesto, who is also a lawyer.

The company promises a luxury visit, including stays at five-star hotels and a visit to Che’s mausoleum.

“We will make your trip a unique experience, an unforgettable memoir. We will personally take care of every detail during your journey,” the website says.

The company’s name comes from Che’s own moniker for the British Norton 500 motorbike he rode through South America with Argentine companion Alberto Granado.

That trip left a strong impression on the young guerrilla, who was preparing to graduate from medical school at the time.

The tour company goes to lengths to emphasize its revolutionary roots. One of the guides is Camilo Sanchez — son of Cuban guerrilla Antonio Sanchez Diaz, also known as “Marcos” — a fighter killed during a 1967 battle.

The tour also includes a visit to Che’s base in colonial Havana and a trip to Santa Clara, a city 270 kilometers (168 miles) east of Havana that was the site of a key 1958 battle.