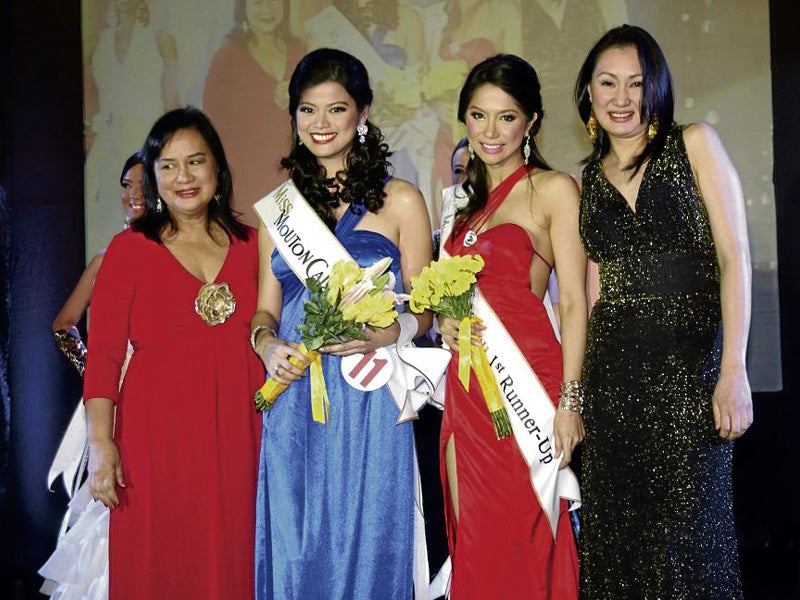 An evening of elegance with Mouton Cadet

THE HYATT Hotel & Casino grand ballroom was the elegant venue for this year’s Baron Philippe de Rothschild Charity Dinner, for the benefit of the renovation of the eye outpatient medical clinic in the Ephehtha compound, Project 4, Quezon City (a project of the Rotary Club of Makati Dasmariñas).

The event was hosted by wine maven Tita Trillo of Titania Wine Cellar, in conjunction with the famed Bordeaux winery of Baron Philippe de Rothschild.

The annual search for Miss Mouton Cadet was featured during this gala event, and the winner, Maricarl Tolosa representing New Orleans restaurant, won an all-expense paid trip to the International Cannes Film Festival in Cannes, France, where recently she got to walk down the red carpet leading to the famed film palace, like a movie star.

The show proper was emceed by Patrick Stephen Moore and French-Filipina Anne Guthier. Alan Dale Alojipan mesmerized the audience with his powerful operatic voice as he sang hit songs from French-inspired musicals like “Phantom of the Opera,” “The Hunchback of Notre Dame” and “Les Miserables.”

Mouton Cadet, the brainchild of Baron Philippe de Rothschild, is the world’s largest-selling Bordeaux wine due to its globally oriented marketing efforts. The wines are blended so that they may be suitably paired with food from all over the world.

As Trillo explained to her guests during her opening welcome remarks, “Mouton Cadet is especially formulated for global consumption. Merlot and Cabernet France grapes are blended with the traditional Cabernet Sauvignon to soften the taste and thus make it more pleasing to the international palate.”

The post-modern and retro décor of the ballroom and foyer area of the Hyatt Hotel & Casino made it the perfect setting for that evening’s stylish event. Black floor-length table linens highlighting rows of sparkling wine crystal goblets, glistening freshly polished silverware and a Zen-inspired centerpiece of golden yellow roses juxtaposed with deep-red banquet chairs reinforced the evening’s dinner theme of “Celebrating Elegance with Mouton Cadet.”

The premise of fusion cuisine was carried over onto the choice of dishes and table setting. The French-Cantonese food was served with European cutlery and dishware placed side by side with delicate celadon, blue and white, and deep red lacquered chinoiserie.

As guests poured into the foyer area of the ballroom for cocktails, they were welcomed by a glass of refreshingly chilled Mouton Cadet Rose 2008 with its subtle fruit notes sustained in a full finish, together with miniature sesame seed pastries filled with pork BBQ, steamed vegetable dumplings, fried enoki mushrooms and pickled beef shank.

Mouton Cadet Blanc 2009 with its light and elegant bouquet of flavors was the ideal match for this “amuse-bouche” as well as for the next item on the menu, oven-roasted pumpkin and seafood soup.

Typical of a formal French dinner, two main courses are served. The first main course was Steamed Lapu-Lapu with a soya-based demi-glaze topped off with finely sliced dried Chinese ham and julienne of vegetables, paired with Mouton Cadet Rouge 2008.

The much-awaited star of the evening, a Grand Cru Classe Chateau Clerc Milon Pauillac 2003, which was donated by the Baroness Philippine de Rothschild for this affair, was poured to complement a cheese ensemble composed of Brie de Meaux, aged Gruyere, Fourme d’Ambert, plum and cinnamon marmalade, and Grissini sticks.

This pairing was then followed by light and refreshing mango tapioca with diced fresh mango, cream and sesame tulips served with a sweet, fruity and velvety smooth Mouton Cadet Reserve Sauternes 2005.

It was truly a grand finale to a sumptuous and exceptional gastronomic experience.