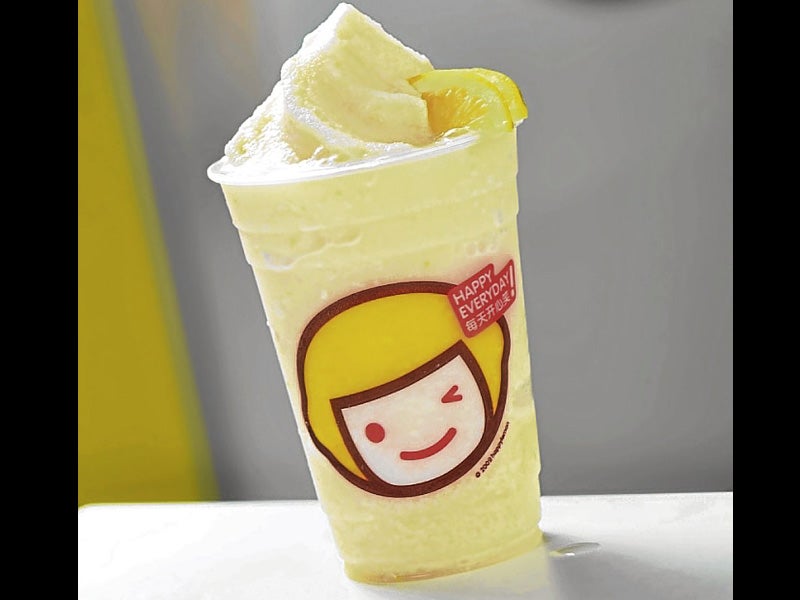 Unique drinks bar caters to both lovers of coffee and juices

ROCK SALT and cheese in a choco shake, Yakult smoothie with a squeeze of lemon, iced latte with taro – that’s ube for you – these unusual combinations are for the curious ones who are willing to depart from their usual blended drinks to try something more adventurous.

Happy Lemon offers these mixes in its two branches, at Greenhills, San Juan, and Eastwood Mall, QC. Think of Happy Lemon as a hip, upgraded lemonade stand that caters to both coffee and tea lovers, and those who want something fruity and fresh.

The drinks bar was established in Hong Kong in 2006, and was brought to the Philippines by a group of friends composed of Kelvin Gaisano (who also put up Red Mango frozen yoghurt here), his sister Kristine, Smart Gilas basketball player Chris Tiu, Andres See, Charles Chua, Wesley Padilla and Edward Go. They wanted to have a wholesome place where people could hang out in and enjoy the drinks.

The Rock Salt Cheese series is the surprise bestseller since the first branch opened at the Promenade last year, Kelvin said. It is available in green tea, cocoa or coffee base, topped with melted cream cheese with a dash of rock salt.

“It initially sounds weird, but people order it out of curiosity, and we’re glad they like it,” Kelvin said.

Other bestsellers are the Milk Tea with Black Pearl Sago, Lemon Yakult Mousse and Crispy Cocoa Matcha with Brown-Sugar Jelly. Prices range of drinks is from P60-P110.

Diners are drawn to Happy Lemon because of its pop-art vibe. The store is done in bright colors, mostly in yellow, with some blue, green and orange accents. There’s a cartoon logo of a winking smiling kid which reminds you to be “Happy Every Day.”

By the counter is a colorful spread of toppings you can add to your drinks – nata de coco, seaweed jelly, aloe jelly, pudding, puff cream, beans, taro. Cager Tiu said that whatever they serve locally would be the same stuff one would have in over 100 branches in Hong Kong, China, Singapore and Australia.

“We only use fresh lemon and there are no preservatives,” Tiu said. “The drinks are pretty healthy, especially the tea- and fruit-based ones.”

Tiu said one of his favorites was the Lemon Yakult, a sweet-tangy smoothie under the Mousse Spin menu, which includes Mango and Orange Yoghurt, and Matcha with Adzuki Beans.

Happy Lemon seeks to compete with specialty coffee shops, said See, who’s in charge of operations: “The Philippines is a coffee country and we also serve coffee drinkers something new on top of their favorites.”

For summer, Happy Lemon offers the Poppin’ Bobba, a blueberry-based drink with “bobbas” or yoghurt beads that looks like sago but pops in your mouth. 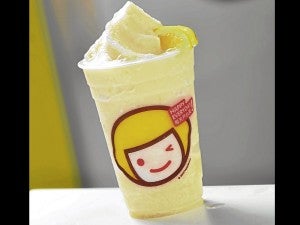 Diners usually order drinks to go to take to the cinema, said Kristine, and while there are no plans to serve food yet, she suggested snacks that go well with drinks such as siomai, nachos, chips and  sandwiches.