Renovations on the ceiling of the Tayabas church in Quezon province have caught the ire of local heritage advocates, who questioned the conservation approach employed by local church authorities.

The church, also known as the Minor Basilica of Saint Michael the Archangel, was declared a National Cultural Treasure (NCT) in 2001 by the National Museum, which called it the “best preserved and the most beautifully decorated church complex in the province.”

National Museum is in the process of restoring the church dome, a separate undertaking from the ceiling renovations spearheaded by the parish church.

“The intention really was good in restoring the ceiling,” said Ryan Palad, heritage advocate and national president of the historical association Adhika. “My principal concern though is the process of the restoration. There should be a restoration plan, a grid of sort identifying the areas for restoration. Plotting the entire ceiling and marking what area should be restored etc.”

Palad, a Tayabas native, said he was surprised to see almost the entire wood ceiling removed. In addition, “some painted parts were transferred to other areas which is a violation already of the supposed restoration process.”

Mary Ann Bulanadi, an associate professor in the College of Fine Arts and Design of the University of Santo Tomas, expressed her shock upon seeing the “restored” ceiling.

“As a cultural heritage worker, I felt deceived,” she said. “The ceiling cannot anymore be claimed to be an authentic piece.”

According to Bulanadi, the old painted ceiling, which was at least 90 years old, had a great contribution to the declaration of the basilica as an NCT.

In 1925, another set of decorative paintings were done inside the church under the supervision of Victor Flores. Church art historian Regalado Trota Jose said this might just be a renovation of an older work.

The interior, which included the ceiling and walls, was again restored in the 1980s under the supervision of Fr. Froilan Zalameda. 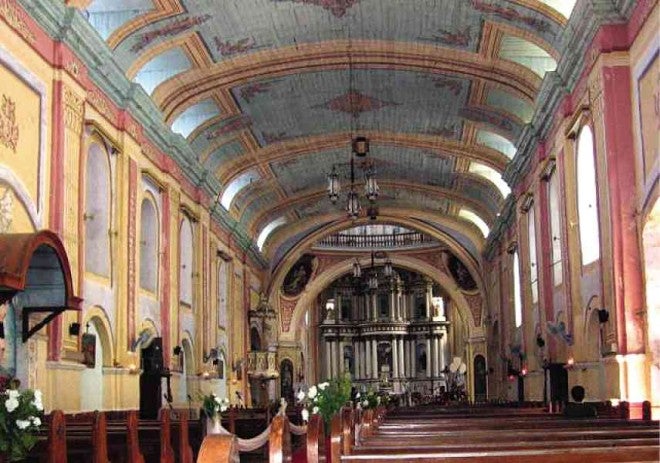 There are some untouched portions of the walls, though, notes Palad.

“Sensible restoration, especially of the ceiling, has made Tayabas a resplendent example of a colonial church,” noted an entry for the Tayabas church in the architecture volume of the Cultural Center of the Philippines Encyclopedia of Philippine Art.

Palad explained that while “we cannot freeze time to make the church retain its (original) condition, we should be sensitive in introducing changes in order to retain its being a representative of an NCT.”

“The church structure therefore is not just a common edifice but worthy of protection so that next generation can still view and appreciate its original setting and condition.”

Palad added that improper restoration affects the authenticity and integrity of an ancient structure.

When asked for his comment on the renovation works on the ceiling, wood conservation specialist Cheek Fadriquela said project stakeholders should have exhausted all means to preserve the painted ceiling wooden panels.

The 2014 National Book Award finalist for his two-volume work, “Kahoy: Woods and its uses from Pre-Hispanic to Spanish Colonial Philippines,” Fadriquela explained it would be best to know “their limitations in preserving the [wooden] panels” before he could further share his thoughts on the ongoing work.

The Inquirer sought the comments of the National Museum and the parish about the project, but there was no reply from them as of press time.

In a previous interview, Fr. Milan Ted Torralba, executive secretary of the Catholic Bishops’ Conference of the Philippines Permanent Committee for the Cultural Heritage of the Church (CBCP-PCCHC) clarified that the CBCP-PHHC is not an approving body to any ecclesiastical cultural heritage-related work but just a consultative body to the CBCP General Assembly and to individual bishops.

Torralba said “the diocesan bishop in whose pastoral circumscription the said work is undertaken” approves the heritage work.

“His [bishop] own ecclesiastical cultural heritage diocesan commission, which he creates by episcopal decree, reviews each and every heritage plan and recommends its approval to the diocesan Bishop, if in accord with the cultural heritage law and principles of the Church,” said Torralba.

“It also monitors or superintends heritage projects and implements the heritage laws of the Church under and by authority of the diocesan Bishop,” he added.