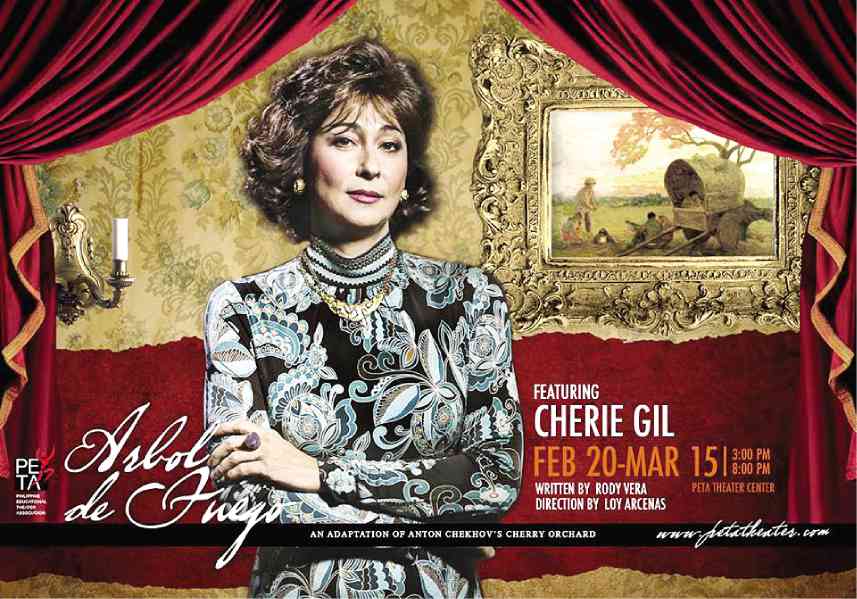 IN THE Filipino adaptation, Cherie Gil plays matriarch Enriquetta Lizares- Sofronio, who throws overthe- top parties, oblivious of her waning wealth. Says director Loy Arcenas: “I loved her as Liliane La Fleur in ‘Nine’ and as Diana Vreeland in ‘Full Gallop.’ So when the Peta offer came about, it had to be her.”

“The Cherry Orchard” is a classic play written by Russian playwright Anton Chekhov. It’s a comedy about how an aristocratic family’s lavish lifestyle renders them broke, forcing them to sell their beloved land prized for its cherry blossoms.

Choosing the play for a Filipino adaptation under the Philippine Educational Theater Association (Peta) was an easy pick for writer Rody Vera and director Loy Arcenas, who previously collaborated on another Chekhov work, “Three Sisters,” adapted as “Tatlong Mariya” for Tanghalang Pilipino in 2010.

The lush cherry orchard is the symbolic anchor for the play, and the first challenge was choosing a counterpart Filipino fruit. Would it be a mango farm? Santol, duhat, pakwan? We can rattle off fruits up to the tiny aratilis, but Arcenas chose a tree, the arbol de fuego, also called caballero or fire tree, which produces beautiful red blooms by summertime.

“The cherry orchard did not have any commercial value for a practical person. It’s just beautiful, and it signified the beauty of that social class which is about to crumble,” says Vera.

These fiery rows of arbol de fuego lead us to Balay Dako, an hacienda in Negros Occidental where the Jardeleza family is about to go—gasp—poor. It is the 1970s, and matriarch Enriquetta Lizares-Sofronio is throwing over-the-top parties, oblivious of her waning wealth.

Cherie Gil plays Enriquetta, and she was the only choice for the role.

Arcenas says: “I loved her as Liliane La Fleur in ‘Nine,’ and as Diana Vreeland in ‘Full Gallop.’ After ‘Tatlong Mariya,’ ‘The Cherry Orchard’ was becoming an interesting dream, and I would tell Cherie that she would make a great Ranevskaya, the matriarch in ‘The Cherry Orchard.’ So when the Peta offer came about, it had to be her.”

Arcenas has worked as a production designer on Broadway, and is hands-on with the show’s overall look and feel: “Me as director can tell my production designer how to design the scenes better. Me as designer will tell my director he should step up the pace. And Peta will keep reminding me to keep the costs down!”

For the Peta adaptation, Vera intends to bring “The Cherry Orchard” back to its original intention: to make people laugh.

“When people encounter Chekhov, they usually think of this dark, sad, serious play—because that was how it was staged by director Constantin Stanislavski in Russia—as a tragedy,” Vera explains.

“It’s very literary, but it’s really a comedy. Chekhov is a dramatist known for farce, and even I was approaching it with so much reverence. Reading the different adaptations is discovering how funny it is! I had so much fun writing it.”

The dialogue is mostly in Tagalog, with some Ilonggo and Spanish. For this, Vera and Arcenas sat down with director Peque Gallaga, who is from Negros, for research. From there, they decided to set “Arbol de Fuego” during the dictatorship, in the late ’70s, “when President Marcos made Roberto Benedicto his sugar czar, resulting in the downfall of the sugar industry that gilded the lifestyles of the Negrense sugar barons.”

As Vera explains, at that time, landowners would go to Europe during tiempo muerto or the period in between harvests, and they would shop and splurge, and send their kids to finishing school. The farmers, meanwhile, painstakingly toiled the land. Chekhov’s text pokes fun at the delusion and snobbery of such rich people, and offers trenchant but unforced commentary about such social setup.

“The situations are heavy, because what would you do when you’re about to lose your land? But these are people who have dug up their own graves without realizing it—and that’s the funny part. You’ll understand the characters without sympathizing with them,” says Vera.

It is also relatable, says Vera, for the audience that is familiar with Chekhov’s works and for those who just want a good laugh.

“Arbol de Fuego” is a product of the comfortable chemistry between Vera and Arcenas, both multi-awarded theater veterans who have also worked together in indie films “Niño” and “REquieme.”

As Arcenas says, “Rody and I finish each other’s sentences because we share the same love for life’s quirkiness and ironies.”

Vera agrees: “Loy and I could somehow guess what’s on each other’s mind. If he says my idea won’t work, I don’t feel slighted. And since this is adaptation, we don’t go very far from the original text. It’s also familiar since I’m a child of the ’70s.”

The duo have been wanting to work on “The Cherry Orchard” since 2009. Now it’s exciting to see how the majestic red trees would roll out on stage.