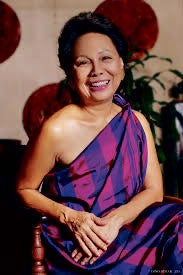 Travels with my aunt

WELL, that isn’t entirely true. Tita Susan Calo-Medina and I were not related by blood. What bound us together were our shared interests in the people, culture and traditions of this country, good art, clear writing and a host of other subjects. Travel, of course, was one of those.

As was the Theater. Quite apt, as I had first seen her when she was acting for Rolando Tinio’s Teatro Pilipino. It was a production of “The Lady of the Camellias,” and I was in high school. Ella Luansing was Marguerite, the lead.

Tita Susan was in the bestfriend-of- the-lead role; in the party scenes, she laughed louder and more raucously than the star of the show, nearly upstaging Ella.

I met her again in the early 1980s, when I was a young professional. The actress had turned into a producer of plays, and she needed a writer to do releases for her stage productions. Boy Abunda, then starting his career as a publicist, introduced us. I remember going to her house on Solar Street in Bel-Air for a briefing, and marveling at the mix of Philippine antiques and crafts.

“What are you looking at? Look at me when I’m talking,” she snapped during our meeting. “Sorry, Tita. I couldn’t help it. That’s a nice bulul you have there,” I answered, referring to an Ifugao sculpture that just happened to be displayed right behind where she was sitting.

“Ah, you know what it is pala!” she snapped back. A pause. “I like you na!” Then, that raspy, staccato “hahahaha” which I would hear again and again through more than 20 years of friendship.

It was that piquant mix of crotchety humor and easy familiarity that I came to appreciate most over the years. Her ability to assess people and experiences and take them at face value may have made Tita a formidable, fearsome presence for many (atribida is a word I often remember being used to describe her).

But once she took a liking to you, that was it. The brutal frankness, the unapologetic humor, the opinions freely given and defended in her trademark gravel voice, were a part of the package. She expected you to accept her with the same inquisitive joy with which she had accepted you. And her fierce loyalty was forever.

I began writing scripts for her “Travel Time” in the late ’80s, a job which required me to go on location with her. I expected a diva-producer who would make the shoots tense. And she could be that when she wanted to. But more often than not, it was the joyful, spontaneous traveler that surfaced.

On our first trip together to Bohol, I arrived at the airport, dressed in a khaki jacket and jeans ensemble specially purchased for the trip. She was in shorts, slippers and camisole (sans bra, which could sometimes make things uncomfortable for those around her). “Saan ka pupunta? Africa?” she chided. “You look so stiff and uncomfortable! How can you work?”

Living in the moment

Throughout those “travels with my aunt,” I learned from her to live in the moment. Once, while tracking down a Bagobo settlement in Davao del Sur, we got caught in a muddy jungle trail. The mud was so sticky that Tita Susan lost her footing and fell bodily into the mud.

She let loose a volley of cuss words, the loudest and meanest that forest must have ever heard, before starting to laugh at herself. We all began to laugh at the seeming impossibility of the situation, and trekked on, mud-caked as we were.

Sometimes, our mutual love for beautiful objects gave rise to uncomfortable situations. In Palawan, we were shooting in a village in the mountains of Brooke’s Point when we both set eyes on a small carving in a hut. We both grabbed at it at the same time, starting a very real tug-of-war in front of the villagers and the crew.

We both stopped suddenly, realizing how rude and foolish we were. After our profuse apologies, the village headman gave Tita the sculpture. She very graciously thanked him, then did a little jig while sticking her tongue out at me. She looked so silly and happy, I forgave her instantly.

Often, we would have to shoot her continuity spiels in the field, which meant that there would be no time for makeup or styling. “Tita,” I would say, “you can’t go on-cam looking so oily and sweaty.” She would pout and oblige me. But later that same day, in a different location, she would flat-out refuse. “Ang oily mo na!” I would say as I looked at the monitor. “Eh, we’re traveling, ’di ba? O ’di realistic!” End of argument.

In Maguindanao, for a special edition on the late Gawad Manlilikha ng Bayan Samaon Sulaiman, we sat entranced as the maestro played riff after hypnotic riff on his kudyapi, a kind of lute. Reviewing the footage later that evening, I commented that the old man was “like the Itzhak Perlman of the kudyapi.”

She thought about my comment for a moment. “I know what you mean, but don’t use that in the script. Sounds pretentious. He is what he is. A Filipino master. That is more fair to both Perlman and Sulaiman.”

Fairness and intellectual honesty were non-negotiable for her. These qualities manifested themselves in the way she edited scripts, as well as in more mundane matters. She would flat-out refuse to be served special food prepared for her and her alone, saying that what she ate should be no different from what her crew was eating.

As in the field, so it was in her home in Bel-Air, where the crew and editors would be served the same food, and at the same time and place she and Tito Johnny and her children would dine. She was a meticulous cook and a great gourmand who knew that the secret of good food was its simplicty and the quality of ingredients.

Once, back from London, she showed me her treasure: a perfect truffle that had been packed in her handcarry. She was going to mix it with bacalao. She served it to us that day, and when one of the crew members asked, “Ano ba ’yang special ingredient, ma’am? Hindi ko naman malasahan!”

Oh, about her “gagu” (pronounced with an exaggerated “U” at the end), so many people would be shocked at the way she would so liberally use the word. But you knew she was fond of you when she called you that.

What she would not allow herself to suffer was the presence of fools and hypocrites. Everyone else, no matter their stations in life, were to be appreciated and enjoyed as long as they were sincere, kind and unafraid of her. Often in the field, I would see her having great conversations with the folk, while self- important bureaucrats, eager to show her the latest developments in their barangays, would be treated with disinterest.

I often wonder these days, while coming to terms with her sudden death, about what made her such a unique and engaging individual. The word that comes to mind is “contradictions.” She knew when she needed to be one of the boys, one of the society amigas or one of the “baklurs.”

Though her roots (she was the daughter of a prominent Butuan political family), and her marriage to a scion of the Medina clan of Pampanga, could very well have turned her into just another “society lady,” she chose to enjoy the best of all possible worlds.

She could revel in erudition and good taste, while enjoying an occasional excursion into the realm of vulgarity. An instinctive knowledge of what was proper and correct tempered her flair and her passion.

The result was Sui Generis Susan who effortlessly mixed her old-school upbringing and practicality with a personal style devoid of artifice or pretension.

I once asked her what were the events that most shaped her strong personality. I still remember the answer clearly. Marriage to Johnny Medina (who passed on two years ago) and motherhood was her first answer. Getting both a local and foreign education was the second.

The third was when, as a young lady, she entered the Assumption Convent as a postulant, only to leave when one of her superiors told her that “she could find God outside the convent, as well as in.”

If finding God means exploring all one’s passions and creative urges, if it means being as many wonderfully contradicting personalities that you can be in one lifetime, then she must certainly have had a direct line.

Authentic. That is how I will always remember my Tita Susan.