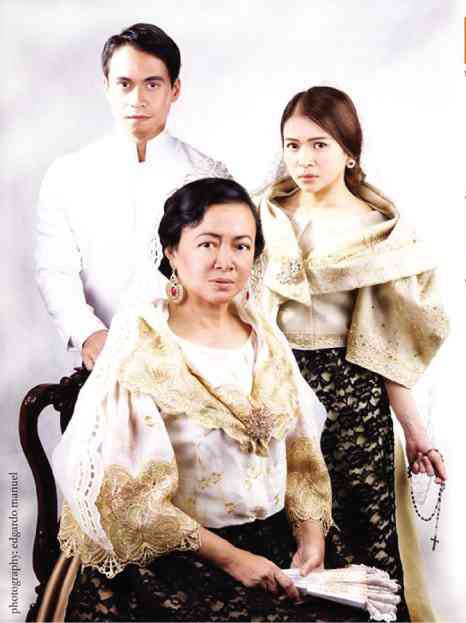 From Tanghalang Pilipino, a Filipino adaptation of ‘Dangerous Liaisons’

Shamaine Centenera-Buencamino is set to play the Marquise de Merteuil/Margarita, a scheming widow who teams up with Vicomte de Valmont/Vicente (Arnold Reyes) in a contest to see who can corrupt the young and virginal Cécile de Volanges/Cecilia and the virtuous and recently married Madame de Tourvel/Teresa.

Tuxqs Rutaquio, TP associate artistic director, will direct and design the set. James Reyes will handle costume design. Music will be by Jed Balsamo and lighting design by John Batalla.

Gatchalian first encountered the material when he was a journalism major at the University of Santo Tomas (UST) via Christopher Hampton’s play adaptation of the novel.

“I saw a copy of the script of   ‘Les Liaisons dangereuses,’ a very slim book, at the UST Central Library,” he says. “I loved the play. And then I saw the film version with Glenn Close, which made me love the material even more.”

There have been other adaptations of the material. In 1999, it was adapted into the US film “Cruel Intentions,” setting the story in a school in New York, starring Sarah Michelle Gellar, Ryan Phillippe and Reese Witherspoon.

“Untold Scandal” is a 2003 South Korean film adaptation which set the story in Korea’s golden-era Joseon dynasty. And in 2012, a Chinese film adaptation starred Zhang Ziyi and transposed the story to 1930s Shanghai.

All of which Gatchalian consumed, among other adaptations and related versions, for his research.

“There is also a 1959 film by Roger Vadim, with the story set in a late-1950s French bourgeois milieu,” he notes. “I also watched ‘Valmont,’ the 1989 film directed by Milos Forman and starring Annette Bening and Colin Firth.”

From France to Philippines

Gatchalian had previously translated Hampton’s play in college (“I was bored,” he says) but was tasked by TP to adapt the novel from scratch.

“I bought a copy of the Laclos novel translated by Richard Aldington, making a lot of notes on the pages and highlighting passages that would denote character and plot movements. It took me a month to write the first draft,” says Gatchalian.

“Tuxqs didn’t want a very modern adaptation of the novel. He wanted to retain the elements that made us love the 1988 film by Stephen Frears: the costumes, the pageantry, and, most importantly, the attitudes and mores of a bygone era,” explains Gatchalian.

He transports the story of the novel to Intramuros, Manila, during the last years of the Spanish regime.

“As the power of the Spanish conquistadores in the colony began to wane in the last years of the 19th century, Señor Vicente and Señora Margarita are two Spanish peninsulares aristocrats who remain unshaken in their desire to engage in depravity through their vicious games of conquest,” he says.

Finding the exact time frame of the adaptation was a challenge. Transporting the story to the Spanish-colonial era of the Philippines is not enough; there must be an ideological and historical framework behind the actions and machinations of the two lead characters.

Gatchalian spent two months reading the following books to “absorb the era”: “Manila, My Manila” by Nick Joaquin; “Working Women of Manila in the 19th Century” by Dr. Luisa Camagay; “History of the Burgis” and “Turn of the Century” by Gilda Cordero-Fernando; “Crime, Society and the State in the Nineteenth Century Philippines” by Greg Bankoff; “Waiting for Mariang Makiling” by Resil B. Mojares; “Palabas” by Doreen G. Fernandez; “The Promise of the Foreign” by Vicente Rafael; and “Vocabulario de la Lengua Tagala,” edited by Virgilio Almario.

“I also consulted Dr. Nicanor Tiongson, a well-respected film professor, critic, Philippine culture expert (and my former boss); and Dr. Vic Torres, an esteemed history professor and playwright, regarding the period setting. My adaptation explores the themes of conquest and class struggle during that particular era,” says Gatchalian.

“I see their preoccupation with corrupting their victims as some sort of a desperate attempt by Spain to cling to its power and influence over a colony that was slowly welcoming a new alien presence, the United States, while talks of a mass revolt swirl in the background,” he says.

“They both regard themselves as ‘patriots’ defending their motherland against threats of revolutionary leaders and new colonizers, but, ultimately, they become harbingers of moral ruin and social collapse, which contribute greatly to the eventual demise of Spanish power in the country,” he adds.