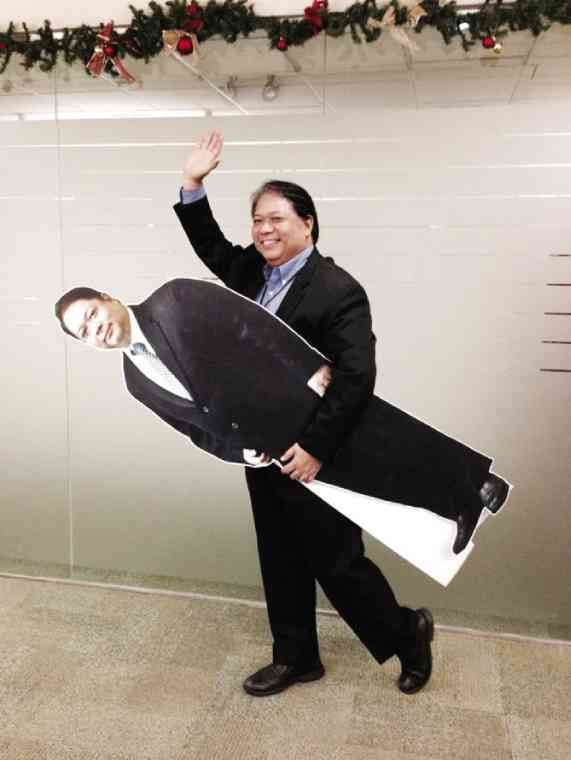 RETIREES are getting younger and younger, and Citibank is worrying about the amount of retirement pay they have to shell out. This guy here, Arcus Fernando by nickname, retired at 54 after 29 years at the bank. He was given several testimonial dinners, one of which I attended. What an outpouring of admiration and affection from his colleagues here or who had flown in from abroad. I wish his dad were around to claim his genes. He does not have an artistic bone in his body.

Tagalog lessons from an English teacher.

Oración. Six p.m., to Catholics before WWII, meant time for the oración or evening prayer. The church announced it to the neighborhood by the well-spaced tolling of one of the bells in the belfry. Every family prayed the oración at home. The prayer began something like this: “The Angel of the Lord came down unto Mary.” “And she conceived of the Holy Ghost” etc.

It was believed that house lizards kissed the ground when it was time for the oración.

Abogado de campanilla. An important lawyer. Usually with an anteroom in his office where a small bell is tinkled by his secretary before the caller is ushered in.

Natutulog sa pansitan. Unconcerned with what’s going on, even in his own work place

Hipong tulog tinatangay ng agos. A useless person with no initiative, doesn’t fight for causes, just gets carried along by the current.

Isang kahig, isang tukâ. A difficult life, like a chicken who has to scratch each time to come up with something to eat.

Putok sa buho. An illegitimate child. Refers to the Pinoy creation story of our first parents coming out of a split bamboo. The father was unknown.

Bumbunan. The fontanel is one of the most important parts of the body. It is believed to be the spot where the soul exits when leaving its mortal coil. In a baby the fontanel is fragile. it was believed that when the baby is hungry its bumbunan is depressed.

For protection, the bumbunan should be covered at all times. Some adults apply it to themselves and believe the fontanel should be covered at the first drop of rain. My driver, for instance, does not care whether his whole body gets wet as long as his folded hanky is protecting his tough old bumbunan.

Mahamugán. Old people believe that a child must not catch the evening dew lest he/she catch a cold and get ill.

Halaga. Price, value or rate that is often used as initial offering of a transaction. It can be haggled down to the lowest possible price.

Halang ang bituka. Intestines are blocking the body. A mean or evil person

Halas. Used to be a common word meaning a scratch made by blades of grass or other plants.

Halimhim. “Sitting;” period when the hen is hatching eggs.

Habagat. Wind from the west

Hasang. Gills (of a fish)

Balisawsaw. Frequent urination. In the old days it was often attributed to having sat on a hot stone or stone bench.

Tagay. A toast with glass of wine or hard liquor