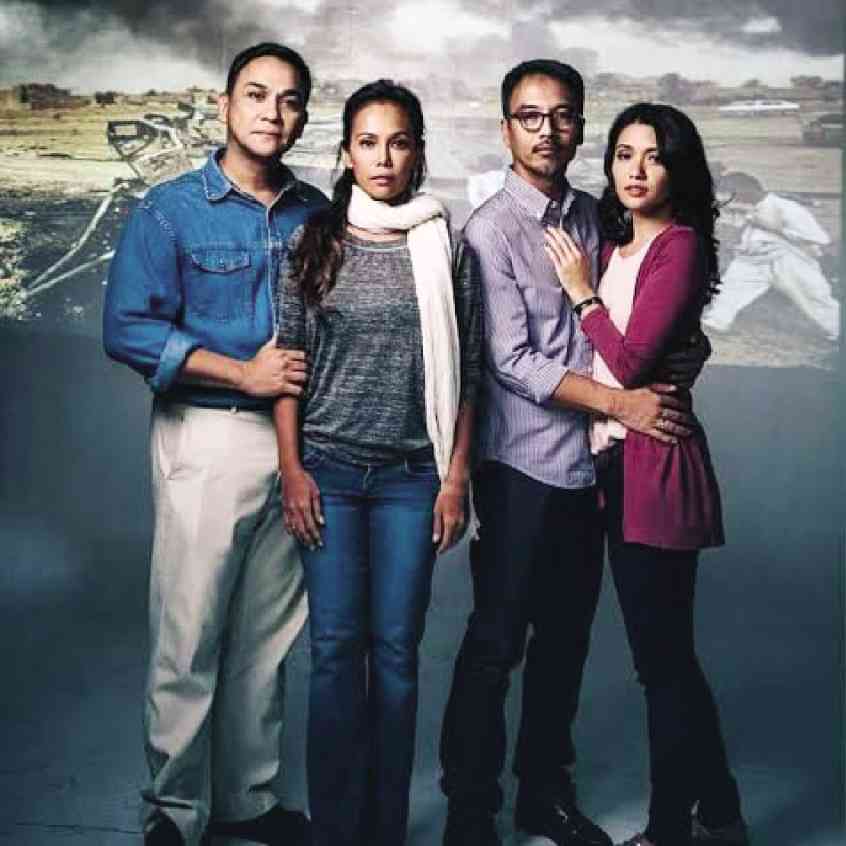 The country’s three biggest dailies all bore similar banner photos last Tuesday: policemen in tears during a recent gathering in the wake of the abominable massacre of their colleagues in Mamasapano, Maguindanao. Those were haunting images, to say the least, but they also inadvertently begged the timeworn question: Just how up close and personal can a picture get before it all becomes disruptive, disrespectful and distasteful?

That exact debate, among other moral ambiguities, whirls at the heart of “Time Stands Still,” the Tony-nominated Donald Margulies play now given perceptive, unflinching life by Red Turnip Theater, in a production that, as if by divine synchrony, opened on the state-appointed day of mourning in honor of the aforementioned fallen policemen.

In “Time Stands Still,” the audience is plunged into the bloody trail of a pathologically insensitive government (sounds familiar?), as seen through the eyes of the photojournalist Sarah and her reporter boyfriend James, played with crackling sensitivity by Ana Abad Santos and Nonie Buencamino, respectively.

When Sarah comes home to Brooklyn with a bum leg and a scarred face after surviving a roadside bomb while covering the Bush administration’s imperialist warmongering in Iraq, the horrors she has seen in some of the saddest parts of the world don’t appear to trouble her at all. Instead, trapped in the posh comforts of her apartment, she finds herself growing increasingly thirsty for those very moments of violence, bringing her eight-year-long relationship with James along for the downhill ride.

As “Time Stands Still” incisively illustrates, it’s not easy being sequestered in a room with two people who are pretty much aware of their “importance” to the world; all they seem to talk about—and deem worth talking about—are Burma, Palestine and saving the Earth, which can be a sickeningly depressing thing.

Just how embroiled Sarah and James are in their own kind of seriousness is further highlighted by the introduction of Richard, their photo editor friend, and his girlfriend Mandy, a self-proclaimed event planner who is described at various points in the play as “guileless,” “fun,” “light” and “very hot” (hopefully painting a clear enough picture of just how shallow the other characters make her out to be).

These two contrasting relationships serve as the foundation for Margulies’ largely successful attempt at creating a two-faced, two-hour tale—one that’s social commentary and domestic drama at the same time.

But it is also this device that makes “Times Stands Still” such delicious target for eye-rolling. In fact, given the current sociopolitical atmosphere, the call to read this play with cynical eyes is quite difficult to resist. After all, whoever in real life describes a person, as Richard does Mandy, as akin to “being in East Berlin when the wall came down?”

Margulies hardly tries to avoid the hackneyed pitfalls that come with the territory, which is surprising for a play that cloaks itself in a formidably intelligent air. In the middle of a rather heated argument, of course Sarah has to fall. And of course they have to have sex, that they may end the night well and remind each other that they are still in love, flawed, human. It’s as if the playwright is actually suggesting that domestication is the great equalizer.

But all can be forgiven when you have a cast as exquisite as the one director Rem Zamora has assembled, who can spout even the most cringe-worthy lines with conviction, if not utter believability.

For a play with such a title, the one thing in perpetual flux is its main character’s face. Abad Santos, no stranger to ice-queen roles, is visibly right at home as Sarah. Her eyes are always probing the room, piercing the nearest soul, prodding the walls to open up and set her free.

“There’s so much beauty in the world, but you see only misery,” Mandy tells her, and you start fearing Abad Santos may have really seen too much too soon.

It has also always been her gift as an actress to have a voice that can play the role for the rest of her body. She need only speak, and every emotion trickles into the perfect place and time, elegantly articulating this woman’s fears and unspoken desires.

Buencamino has the trickier job of maintaining a calm, protective surface, even as the spirit beneath boils with anger and guilt. He brings forth an altogether powerful performance as James, despite (or perhaps, aided by) the fact that his voice—and the incredible shouting it’s capable of—tends to render the rest of his coactors inaudible during the confrontational scenes.

It’s actually a testament to the intelligence and skill that Zamora and his actors have brought to this play that, while they all blab about people killing and children dying, it remains difficult to fully feel for these privileged, self-congratulatory white people.

Denis Lagdameo’s meticulous imagining of Sarah’s apartment—which may just be the year’s most detailed and handsome, if not expensive-looking, set—surely helps build that emotional distance.

Which brings us to the character of Mandy.

When the role of the dumb blonde with a pure heart comes your way, you don’t sigh in relief, thinking it will all be a walk in the park. Instead, you start running through your head the infinite ways this character has been spun onscreen and onstage, wondering in a state of panic how it could ever compare to Amanda Seyfried in “Mean Girls” (so far, the new millennium’s gold standard).

Which is why, when such an overworked character is given a surprisingly refreshing treatment, one can only stand up and ask, “Who in heaven’s name is that?”

In this production, it is Giannina Ocampo, who transforms Mandy into a creature of genuine compassion and innocence.

She brings everything to the table—warmth and superficiality, kindness and tackiness—in a kind of breakthrough performance that actorish dreams are made of. She doesn’t just make the shallow-outsider trope fresh; she revitalizes it, granting it heart and a functioning brain.

It’s then easy to see why an equally contradictory character like Richard (played with all the tiny comic details down pat by Nor Domingo) would find her attractive at all.

Among the four characters, it is Mandy who ends up becoming the voice of reason, a representative of the normal, nonintellectual majority, the ones who are less likely to question a picture for either its appropriateness or supposed virtues.

But where, indeed, do we draw the line? Abad Santos and Ocampo make such convincing arguments through their dazzling performances, the answer hardly even matters anymore.