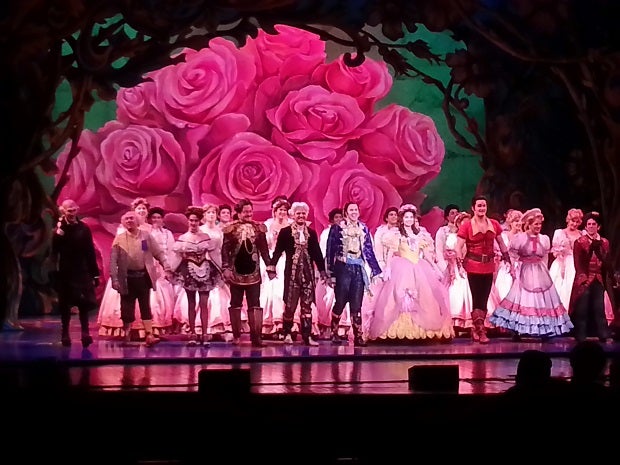 CURTAIN call for all-American cast of the Broadway musical "Beauty and the Beast" which winds up its Manila run today, Feb. 8, at the Cultural Center of the Philippines. POCHOLO CONCEPCION

‘Beauty and the Beast’ ends Manila run today at CCP

When the curtains rise for the last performance of the Broadway musical “Beauty and the Beast” today, Feb. 8, at the Main Theater of the Cultural Center of the Philippines (CCP), the production will have hurdled two major challenges: the cancellation of a number of dates to give way to Pope Francis’ recent visit; and the depressing national mood following the Mamasapano massacre.

The stage musical—which is based on the 1991 Disney film which was in turn adapted from the 1756 French fairy tale by Jeanne-Marie Leprince de Beaumont—is the ninth longest-running production in Broadway history. It has reportedly grossed more than $1.4 billion worldwide and played in 13 countries.

Its Manila run, which opened on Jan. 9, had to be temporarily canceled during Pope Francis’ four-day visit since the roads leading to the CCP were the major routes used by the papal convoys.

Its gala night, which had also been reset to Jan. 27, happened just two days after the bloody encounter between the PNP-SAF and Moro rebels in Mamasapano, Maguindanao.

Fortunately, the show’s Philippine promoter, Renen de Guia of Ovation Productions, was able to negotiate an extension of its run: first, till Feb. 1; and a second extension till today (a matinee at 2 p.m. and an evening performance at 8 p.m.).

Aside from its music (Alan Menken, Howard Ashman, Tim Rice), particularly the title song which won several Academy and Grammy awards, the success of “Beauty and the Beast” lies in its enduring message of human kindness that conquers the improbability of a woman falling in love with a hideous-looking creature.

The suspension of disbelief as a literary device works in underscoring, for instance, the Christian virtue of humility—the Beast who discards his gruffness, arrogance and wild temper to connect with the simple but intelligent Belle, who in turn learns to see goodness and, indeed, beauty hiding beneath his ghastly countenance.

Notwithstanding the production’s tendency to stretch the “fairy tale” aspects of the story to include the cartoon-like character of Gaston, the antagonist suitor of Belle, and Lefou, his bumbling sidekick who is forced to act in a slapstick manner, “Beauty and the Beast” sways even the cynics among the audience to believe in the power of musical theater to touch the heart.

Curiously, a new song—one of seven tracks added to the musical—sets the stage for the ultimate wish of the Beast and his servants in the castle: to be “Human Again.” As the production number unfolds, not a few in the audience are struck by the happy song’s somber significance vis-à-vis the barbaric conflicts plaguing the world.

Even the title track itself, subtitled “Tale As Old As Time,” has a couple of lines that serve as timeless reminders for all ages: “Finding you can change/Learning you were wrong…”

Reflecting on the show—his initial venture in musicals after decades of promoting pop and rock concerts—De Guia sent a text message to Inquirer: “It’s been a most joyful and satisfying experience seeing people walk out of the theater, night after night, with beaming smiles and many with tears in their eyes.”