Addario reveals vulnerability in memoir 'It's What I Do' | Inquirer Lifestyle ❮ ❯ 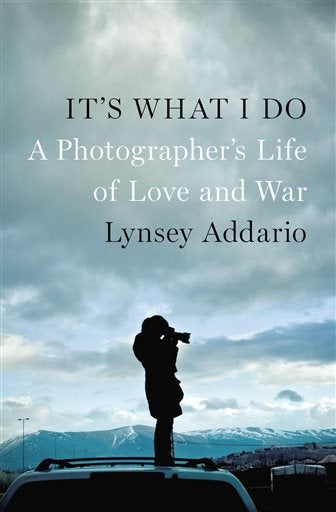 This book cover image released by Penguin Press shows, "It's What I Do: A Photographer's Life of Love and War," by Lynsey Addario. AP

Addario reveals vulnerability in memoir ‘It’s What I Do’

“It’s What I Do” (Penguin Press), by Lynsey Addario

Photojournalists, particularly the ones who repeatedly cover war zones, have a reputation for being tough, fearless, sometimes cavalier and repeatedly lucky in a way that defies logic. So, it’s striking the number of times Lynsey Addario writes in her memoir, “It’s What I Do,” how often she was scared or had had enough of the misery she was assigned to cover.

It’s reassuring to know that Pulitzer Prize winners and people who win MacArthur “genius” grants have moments of vulnerability, too. Her ability to capture that vulnerability in her subjects, often in extreme circumstances, has propelled Addario to the top of her competitive field.

Addario’s memoir details the physical risks she faces in conflict zones with her colleagues, including local men hired to drive and translate for her. She survived a serious car crash and being kidnapped twice while on assignment; two of her drivers did not.

She also exposes the risks particular to women working in journalism, and arguably not just those who report in the Middle East. Addario gets the shot while enduring casual sexual harassment, the fear of that harassment escalating to assault and the horror of that assault when it happens.

She also writes about fighting off the fear of being perceived as weak if she points out the harassment to her male colleagues, who are oblivious to what’s happening to her as they compare images, because this sort of thing never happens to them.

Addario writes most, though, about the other side of war: attending the funerals of friends and colleagues, the fights with editors over images that make faraway readers uncomfortable and the strained relationships with people who don’t work on deadline. The stakes were just as high in her personal life, and she suffered from a serious fear of missing out as her friends and sisters hit all the milestones that “responsible grown-ups” are supposed to hit.

“It’s What I Do” chronicles Addario’s shift from focusing on the latest big story to more personal projects that explore the intricacies of working in foreign cultures and making them relatable to readers elsewhere. She spends less time talking about the images she made of Taliban men than about the hospitality they showed her, their cultural rituals of tea and their pride in their children.

There’s not much discussion about photography gear or technique in Addario’s memoir, except for this: find good mentors who help polish your skills and connect with the people you are photographing. She mentions more than once looking her subjects in the eye and finding a way to communicate — in other words, she’s looking for humanity before she picks up her camera.