How biking around Manila has made my life better | Lifestyle.INQ ❮ ❯ 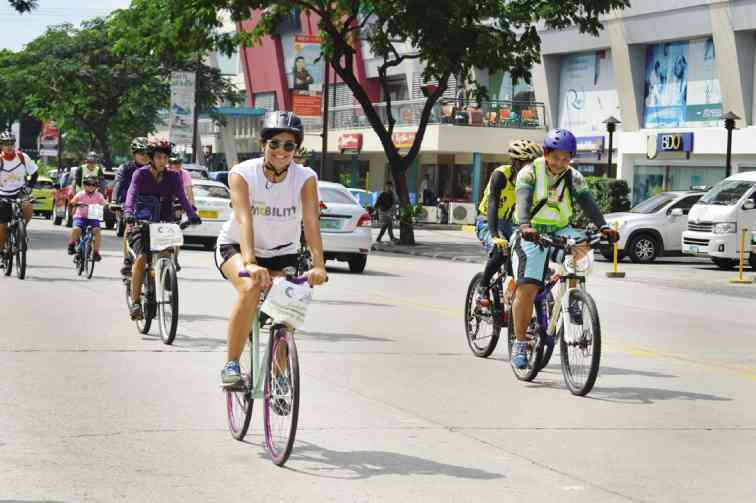 THE AUTHOR starts her day with a 20-minute bike ride from the house: “I choose the road. I choose the speed. I don’t have to wait for anyone, and I don’t pay for anything. Rather than racing with anger,my heart circulates energy through my body.” JULIA NEBRIJA

How biking around Manila has made my life better

I’ve been biking in Manila for two years. I can tell you that, yes, it is possible to move around the city on a bicycle—and it’s made my life better.

Before biking, my commute to work was an obstacle course. I crossed two trucking roads to wait for a jeepney. Then I sat thigh to thigh in a veil of car exhaust and horns for 20 minutes before catching another jeepney for a 15-minute ride.

I would end my journey by fighting for sidewalk space or squeezing into a tricycle.

My enthusiasm for conquering the day faded, and my frustration took the better of me.

Now, I start my day with a simple 20-minute bike ride. I roll out of the house, commanding my own journey. I choose the road. I choose the speed. I don’t have to wait for anyone, and I don’t pay for anything.

Rather than racing with anger, my heart circulates energy through my body. My mind wanders as I think about the day ahead and lose myself temporarily in the rhythm of the city.

I breeze past the buko pushcart surrounded by school children in crisp white uniforms.

The early morning jazzercisers pump up the jam in old-school spandex and windbreakers, and I look for the men practicing arnis under a clump of trees.

Outside a sari-sari store a man coddles his rooster and a woman cradles a newborn. I get wafts of festering trash but I also smell fresh pandesal.

I don’t see many women in my commutes but I find camaraderie with other bikers on the road. I exchange head nods with day laborers biking to construction sites and stop to chat at stoplights with racers practicing around Mall of Asia.

Last week, I passed a row of waiting pedicabs, and held out my hand as I rode past, catching a half dozen high fives from the drivers. We all laughed.

I used to dread my commute, but now I look forward to it.

By the time I reach the office I feel better mentally and physically. For me, exercise has to be a necessary part of my day, or it just won’t happen.

I used to consider dancing in clubs and climbing a pedestrian overpass sufficient cardio workouts. Now my new waistline indicates that daily biking is healthier.

I wasn’t always a confident biker.

When I lived in New York City, my boyfriend at the time bought me a pink Schwinn for my 26th birthday. He took me on rides to Central Park and across the Brooklyn Bridge.

Soon I was biking alone to school and to meet friends downtown for dinner, addicted to the feeling of freedom as I rode through the streets.

When I moved to Manila I didn’t think I could keep biking. The twisted road system and lack of street rules intimidated me.

It wasn’t until a friend in Manila Fixed Gear helped me find the perfect mint-green fixie and encouraged me to join the group’s weekly rides that I felt brave enough to give it a try.

Even with a band of fellow bikers, I thought the first time I circumvented Quezon Circle would be my last.

Now I find the chaos an advantage.

In New York City cars fly down the wide open grid of streets. Even where there are bike lanes, cars rule the road and they do so with tunnel vision.

In Manila the streets are narrower and less direct, limiting fast-moving traffic. Drivers expect that at any moment a pedicab, pushcart, group of children, or my favorite, the guy trying to sell a metal coat stand, will step out into traffic. It forces drivers to be more aware.

Still it’s important not to underestimate the risks. For the most part, I consider myself a careful adventurer. I wear a helmet, avoid major roads, and stick to familiar streets. I use a bike lock. I use a neti pot to clear my sinuses and sometimes I wear a facemask.

At night I use both a front headlight and a back blinker.

But sometimes I find myself wandering into unknown areas after a few wrong turns or an urge to get lost searching for old buildings, markets, and new corners of the city.

Outside the confines of a vehicle, the texture of the city is tangible, both the good and the bad. But in my six years in Manila, I’ve experienced more acts of protection than harm.

Once a concerned tricycle driver stayed close while I was stopped, taking a photo of the skyline on the Pasig River. He accompanied me from the bridge until I arrived at Smokey Mountain. I was thankful for the watchful eye.

I’m not always so fortunate.

One evening last year I was walking home along a poorly lit stretch of UN Avenue at 11 p.m. I was enjoying the evening breeze and stopped to take a photo of a Virgin Mary glowing in Christmas lights through a wrought iron gate.

As I turned around, a man grabbed me. When I pushed him away I saw the silhouette of his knife and ran.

I was lucky to escape unharmed, with only the harsh reminder that I should not, even for a moment, let down my guard. Not yet.

One day my love for exploring the city will be met with safer streets.

On Nov. 23 last year, the National Bicycle Organization hosted the first National Bike Day in the Philippines. We toured Metro Manila in a parade of hundreds of bikers to show solidarity for a more pedestrian- and bike-friendly city.

This is how change starts, when we all want it and believe it can happen. As we rolled down Edsa, everyone rang one’s bells, and it sounded like a thousand promises.

The author is an urban planner living and working in Manila. She is the executive director of Viva Manila and the chair of the Inclusive Mobility Network. Follow her on www.projectmnl.com