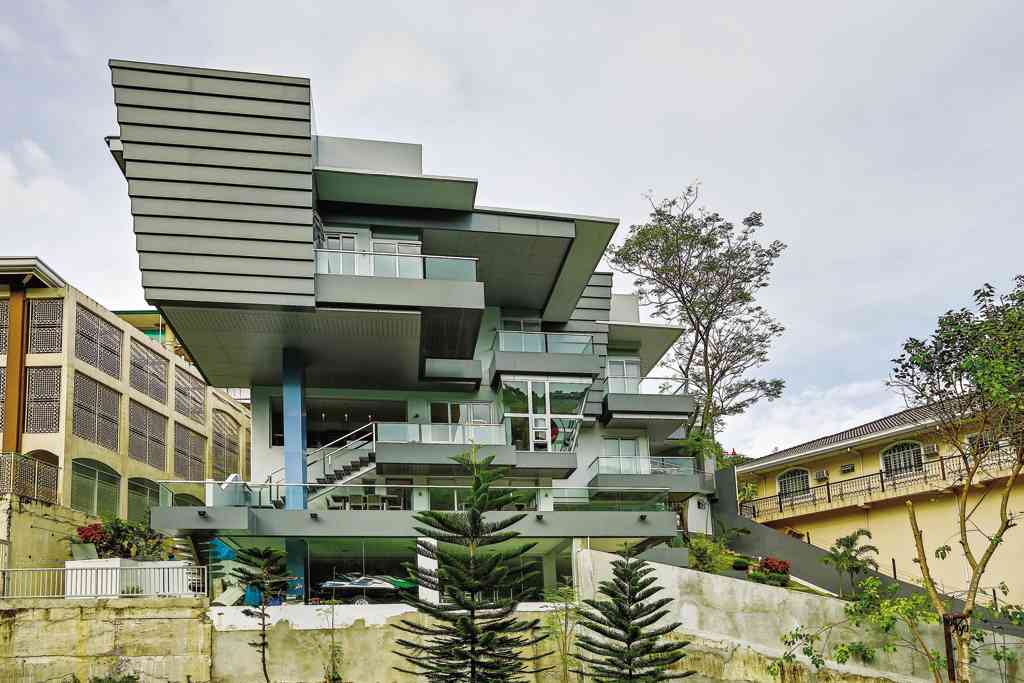 THE STILETTO House is built on a hillside. The modern design reflects the lifestyle of a young businessman. Jao was inspired by the cantilevered balconies in Fallingwater, Pennsylvania. PHOTOS BY PJ ENRIQUEZ

The cantilevered balconies of Fallingwater, a 1930s house built over the waterfalls in Pennsylvania, was the design inspiration for architect James Jao’s Cebu project.

American architect Frank Lloyd Wright gave the illusion that Fallingwater extended over the waterfall instead of rising from the earth.

In contrast, Jao built a house in Cebu on a hillside and made it look like it was being supported by a single column. Its tapered silhouette resembles a woman’s stiletto—hence the name Stiletto House.

The multilevel house is built on a slope facing the Boy Scouts Camp, a protected forest. “There was no other way but to build on the skew,” says Jao.

The space flows like in a zigzag. From the street-level gate, one descends to the main entrance, which opens to the living room and the open-plan dining room and kitchen.

A floor above the public area has the bedrooms, all walled in by expanses of glass to allow an unimpeded view of the landscape.

A floor below are the game rooms and service area.

The basement on the fourth level is storage for the owner’s big toys—his cars and jet skis.

Wright’s influences are the cantilevered balconies that double as ceilings on the lower floors, and the integration of the house exterior.

The structural stability was tested when a 7-magnitude earthquake hit Cebu in October 2013.

When the project started, the owner wasn’t married yet. Halfway into construction, he got engaged to a foreigner.

The couple now have a child. “The house was originally masculine and boxy. Its shape is very angular except for the stiletto column, which adds a feminine touch,” says Jao.

While Fallingwater was built on stone masonry to blend with the landscape, the Stiletto House is modern in design. The facade is built with reinforced concrete, tempered glass and layers of aluminum cladding in basalt grey finish.

Corner windows and glass railings on the tiered balconies optimize the view. Instead of the popular hardwood staircase, Jao favored Spanish tiles because they don’t chip, nip or crack.

Jao, who also decorated the house, chose brown and gray for their calming effect. “They are not too trendy. The colors come from decor accents from the flowers and artworks,” he says.

Born in Manila and an architecture graduate of the University of Santo Tomas, Jao went to Cebu for a decor project.

As his client base expanded, he set up his firm in Cebu and just shuttles to Manila.

He acquired a post-graduate degree in city design and social science from the London School of Economics. He has since been building affordable eco-homes.