Before the Eraserheads became rock stars, they wrote a Pinoy musical | Inquirer Lifestyle 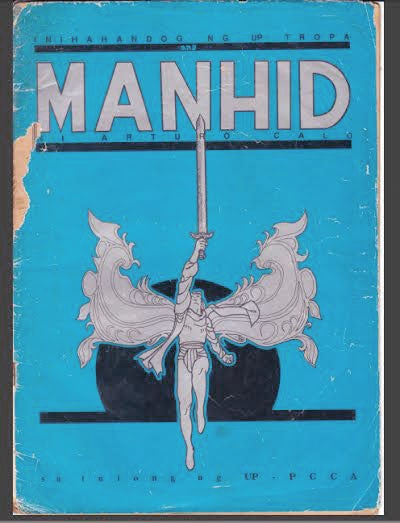 THE PLAYBILL of the original production

Before the Eraserheads became rock stars, they wrote a Pinoy musical

It was 1991. UP Tropa, a group described by its adviser Rogelio Sicat as “isang barkada ng estudyanteng iba’t-iba ang kurso na mahilig sa teatro at malakas ang loob,” was working on “Manhid,” a new production at the University of the Philippines in Diliman, and somehow—the members were not sure exactly how, “the details are hazy,” they said—the Eraserheads got involved.

Buddy Zabala, then the band’s bassist and whose other bands include The Dawn and Cambio, said, “It probably has a lot to do with members mixing up in extracurriculars… making the right connections. You know how college is, one thing leads to another. Ask Paul Morales. He might have the story.”

We did. Paul, who directed and choreographed the show and who is now Ballet Philippines’ artistic director, said, laughing, “The details are hazy, too. But I knew Ely (Buendia, Eraserheads lead vocalist and guitarist). Ely and I were classmates in Math. I think the other members knew Raimund (Marasigan, Eraserheads drummer). Parang friends of friends.”

The Eraserheads, then a new group, was formed only two years prior, and still two years away from releasing “Ultralectromagneticpop!”—their massively successful debut album that kicked off their journey to becoming the Philippines’ most popular band.

Buddy remembers the Eraserheads’ early days: “We were playing where college orgs would take us—CMT, Econ, Engineering. Rehearsals were in Alberto’s in Cubao or the Alumni Center in UP. Three years in, I was still trying my best not to fail my hastily chosen Industrial Engineering course. And for a probinsyano from Zamboanga, meeting theater types in UP was eye-opening. Those were fun times.”

He described the members of UP Tropa as “Driven. Noisy. Opinionated. Dreamers. Why-not types. Just like band people.”

The Eraserheads (Buddy, Ely, Raimund and lead guitarist Marcus Adoro) soon found themselves working with Auraeus Solito, Vincent de Jesus and Carina Evangelista on writing songs for “Manhid.” “Aureaus would give Carina the general direction for the songs and she would flesh out the lyrics. Outstanding writing! Then Vince, the musical director, would sit the band down and make the musical arranging then and there. Sessions were of varying degrees of intensity, focus and fun. Highly collaborative,” recalled Buddy.

He said it was this creative process that taught him that music takes a backseat to lyrics.

The musical was inspired by Salman Rushdie’s “Midnight’s Children” and X-Men comic books. Buddy said, “We had the best preparation for ‘Manhid’ in the person of Vincent Simbulan during freshman year in the Kalayaan dorm. He’d lend us new graphic novels every week, the X-Men among them.”

“Manhid” asks the question: “What if the Edsa Revolution failed?” The show presents an alternate world with heroes and villains and people stricken with “Kamanhiran.”

“Any fan of superhero stories and the X-Men will tell you that it’s all about the characters,” said Buddy. “Same thing with ‘Manhid’—the characters are alive in that story. And the casting was spot-on!”

Romeo Lee, Tintin Bersola and Connie Chua were part of the original cast.

Buddy’s favorite character from the show is MuraDugo. “I was then into a lot of swearing, too.”

The production was staged at UP’s Palma Hall lobby (with the last two shows held at the CCP Little Theater). “Palma Hall had several heavy, wooden Jerry Araos pieces which the production had to clear out and return day in, day out,” said Buddy.

The Eraserheads performed in the show. “The band was almost always too loud for the cast’s singing,” recounted Buddy. “In those days, there were no lapel mics for the singers. So the four of us would try to play as soft as we could for the singing to be audible. Or not at all. Vince’s piano-playing took care of that.”

He added: “It was fun! I was part of the choir in high school but had never made music for a live setting like a musical, much less a rock musical.”

Buddy has stayed in touch with the cast and crew of the original production. “Some are friends, others I run into during theater and music engagements.”

Paul said the show “cemented their friendship” and that, after its run, the cast and crew continued to support the Eraserheads at their gigs in Club Dredd.

In 1994, the Eraserheads included the song “Kailan” in their second album “Circus.” The song, originally written by Carina and the band for “Manhid” with the title “Huwag Mo Akong Hahagkan,”was a huge hit.

“‘Kailan’ is a song about unrequited love, which was supposed to be performed in a laundry scene,” said Buddy. “The scene eventually got cut. But the song became the intermission number for the musical.”

Paul danced in the Eraserheads’ first concert in UP. Auraeus directed and Paul choreographed the music video of “Ang Huling El Bimbo.” The video won the International Viewer’s Choice Award for Asia at the 1997 MTV Music Video Awards. The band was there to accept the award at New York’s Radio City Music Hall; in his speech, Buddy thanked Auraeus.

Ballet Philippines’ new production of the show opened yesterday and will run until March 8 at the CCP Main Theater.

The Radioactive Sago Project will be this production’s live band. “Sago is a perfect band for ‘Manhid.’ It’ll be able to pull off the ideas we were just talking about back in college. I can’t wait to hear Francis De Veyra and Sago at the CCP Main Theater! I hope Vince de Jesus is there, too,” said Buddy.

Buddy is also excited to take his daughter to see the show. It is, after all, during “Manhid’s” first incarnation where he met his future wife, Earnest Mangulabnan.

She was then one of the assistant production managers.

“This is how I remember it—she was in charge of dinner in most nights… mostly consisted of rice and tocino. I’m a big fan of tocino and one night I asked for more. She wouldn’t give me as there’s only enough to go around. She still stands her ground nowadays.”