‘Waiting for Godot’ five ways (maybe six)–only one succeeds, but how | Inquirer Lifestyle

‘Waiting for Godot’ five ways (maybe six)–only one succeeds, but how

When Tanghalang Ateneo (TA) announced that, not only was it staging Samuel Beckett’s “Waiting for Godot,” it was also doing five versions of the play, I was skeptical.

Best known for igniting a literary movement that came to be called the Theater of the Absurd, “Godot” on the stage can be a test of fortitude. (It already is on the page.)

Even when staged well, the play is unremittingly bleak; in the wrong hands, the play descends into dreadful tedium, with the audience feeling trapped in one of the lower circles of hell.

Given the reins of this ambitious project was JK Anicoche, artistic director of the Sipat Lawin Ensemble. From what I’ve seen of his work, I got the impression of a director who paints in broad strokes, restlessly resisting going down conventional trails in order to pursue untrodden paths, for better or worse.

His “Battalia Royale” (adapting the cult movie and novel) and “Haring Ubul” (after Alfred Jarry’s “Ubu Roi”) followed the same format: a broad concept within which the performers are given plenty of latitude to operate. It was the director as game master.

Of his several efforts for the Cultural Center of the Philippines’ Virgin Labfest, perhaps “Kafatiran” worked best. This playful, almost manic, irreverence backfired in Anicoche’s first effort for TA, “Ang Bakkhai” (“The Bacchae”) by Euripides.

Staged in 2013, the Greek tragedy was an incoherent, gimmick-filled mess, suggesting a director who didn’t take the text seriously.

TA and Anicoche raised the stakes by doing five versions—technically six, as Glenn Sevilla Mas, TA artistic director, explained, since the all-women set was to be done in both English and Filipino by different casts—of this intellectually slippery play.

The production’s portentous title was “Godot5: Five Ruminations on Samuel Beckett’s ‘En Attendant Godot.’” The just-concluded three-week run was punctuated by Saturday “loops”: four performances (each version was called a “set”) following one after another.

There’s a method to Beckett’s madness, a logic to the loopiness. To do the play defying or ignoring this peculiar sense-in-nonsense risks disaster. TA’s five (or six) takes on Godot weren’t quite a disaster, no, but they were (with one glorious exception) a frustrating hodgepodge of missed opportunities, of unexplored possibilities.

A handful of performers stood out, but too often they seemed disconnected from any human reality, too conscious perhaps that they were playing characters in Godot, absurdist masterpiece, instead of Godot, hysterical comedy.

Beckett’s characters exist in that no-man’s-land between authentically human and comic caricature, and the text is littered with self-conscious signaling that disrupts illusions of naturalism, but these different takes indicate that it is better to err on the side of authenticity.

More significantly, the different concepts seemed half-baked, in part because no effort was made to transform the script. Guelan Varela-Luarca, a talented translator (and actor, too, as his turn as the lead in last year’s “Middle Finger” showed) aside from being a prolific one, provided a suitably fine text, traversing language registers with ease.

It never made sense for Gogo to exclaim “Trey bong!” in praising a speech of Pozzo’s. (The expression comes from music hall. Why not change the reference to a current, local entertainment?) In the all-women sets, the characters called each other “sir” or “manong,” for no apparent reason; Didi told Gogo, “Sipain mo [si Pozzo] sa bay*g!” The alienating words and references betrayed a lack of vision, which was why, ultimately, the adaptations didn’t go far enough.

So, what did the different versions then reveal about the travails of each particular group of people? Nothing much. Being gay, a woman, a young graduate, a young man—each variation claimed to ruminate (as the title declares) on what it is like to be such a person, yet these ideas were merely toyed with, not thought through.

Questions were raised, then abandoned casually. There was a vital playfulness at work here, one that dared to explore a plenitude of options, but a lack of necessary seriousness was also on display, one that won’t let ideas ripen or pursue them to their conclusion.

It’s as if one tried on clothes for hours at a time without deciding which ones go together. The end result: incoherence, dissatisfaction, and at the end of the long Saturday loop, weariness.

These critical comments did not apply, however, to the final set, the only one featuring much older actors.

Named Old Folks Waiting, this version, the best of the lot by far, was the least adventurous. No high concept, no what ifs about the setting or the characters’ identities.

Didi and Gogo were dressed like Beckett’s Chaplin-like tramps: bowler hats, jackets, slacks. These were characters alien to our mental landscape (Beckett harkened to the low-brow comedies of his time, such as the vaudeville, music hall and circus). But it didn’t matter. Joel Saracho and Jojit Lorenzo imbued the pair with such pathos we were moved to take their side even as the universe seemed to conspire against them.

Saracho played Didi with a peremptory grace, assuming the role of older, wiser brother, impatient but protective, to a younger sibling who needed attending to.

Lorenzo’s hangdog Gogo was hard-headed, chafing at Didi’s superiority, yet needy and affectionate (even as he threatened to drool over the entire set, so slack was his jaw).

The two seemed to have been together for ages, and their embraces after a petulant exchange or Gogo’s waking from yet another bad dream were about as tender a gesture I’ve seen on stage.

The effect of the language change in the second act—they spoke English in the first then changed to a Filipino that arrived via Batangas—was to make them seem funnier yet closer to us. 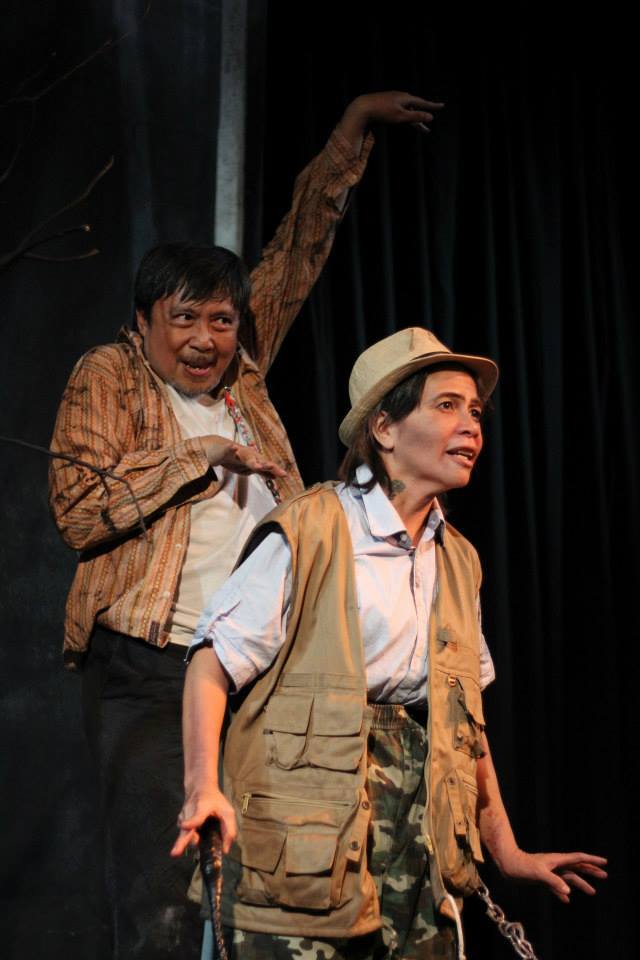 Even more remarkable and revealing was the pairing of Mailes Kanapi as Pozzo and Bodjie Pascua as Lucky. (Using two languages and casting a woman as Pozzo was as audacious as this version got.) They turned these bizarre, inscrutable characters into pals, lifelong friends.

When Lucky brought over the stool upon Pozzo’s command, Pozzo gave him a quick peck on the lips. When Lucky kicked Gogo in the shin, Lucky and Pozzo hugged, smiling; they’re on the same team, always have been, and no one could part them.

Kanapi and Pascua gave the pair such depth that one imagined the two as having their own story, now lost to us (or perhaps written between Beckett’s lines in invisible ink), a parallel tale that mirrored Didi and Gogo’s, except that they weren’t rooted to the spot but chained to the road, hurtling down to a destination unknown, bumping into strangers they would forget the next day. I missed them once they left the stage.

The performance passed the time splendidly, moving from joke to pratfall, laughs to laughs. And then came the sudden end, feeling all the colder for the mirth that preceded it. When Pozzo, explaining his sudden blindness, said, “Isang araw isinilang tayo, isang araw mamatay tayo. Sa parehong araw, sa parehong sandali. Hindi pa ba sapat sa iyo ’yon?” it suddenly made perfect sense, this impenetrable mystery, the insight blooming inside you.

The words got trapped in his throat, and Didi embraced him desperately, tenderly. Another startling moment, but a marvelous one, and deeply moving. (In subsequent performances, the actors in the other versions adopted the gesture.)

Only in this last version did Beckett’s notorious bleakness hit home; it felt like I stared into the harrowing abyss Didi and Gogo existed, and I shared their graveyard laughter because, anyway, what else could you do when Godot failed to show up and you couldn’t leave?

I left the Black Box Theater stirred, exhilarated, and the people around me were buzzing, too. For days I couldn’t shake the words and images from my mind.

All it took was freeing “Waiting for Godot” from conceptual pretensions and making the characters, played by performers who’ve been around the block a few times, as warm and human as possible. Damn. What a concept.