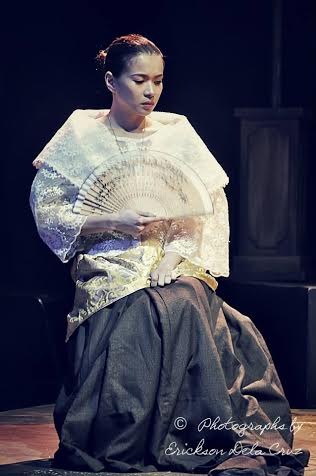 Less than 20 minutes into Tanghalang Pilipino’s “Juego de Peligro”—an earnestly acted and ornately designed adaptation of Pierre Choderlos de Laclos’ 18th-century epistolary novel “Les Liaisons Dangereuses” (famously remade first into the play “Dangerous Liaisons” by Christopher Hampton, then a movie directed by Stephen Frears that starred Glenn Close and John Malkovich)—it’s clear that the audience must shell out a little more focus and attention than usual, lest they get left behind by the mentally fatiguing proceedings.

The fatigue is chiefly the making of Elmer Gatchalian’s adaptation of the Laclos novel. It utilizes, in layman’s terms, your señorita lola’s Tagalog—lyrical but lengthy, tortuous and torturous, sprinkled with Spanish expressions, the sentences seemingly having lost their periods.

This is not to discount the purpose Gatchalian’s script fulfills, which is to evoke the Manila of the late 19th century, when the denizens of that period had to grapple with traditionalist norms and mores against the backdrop of the crumbling Spanish regime. Such is the time and place for the playground of “Juego’s” two principal characters: the scheming Margarita (Shamaine Buencamino) and the irreverent, womanizing Vicente (Arnold Reyes)—former lovers who find themselves at the start of the play turning to each other for their latest games of seduction.

And that’s really what “Juego” is about: an elaborate game of sex, woven by two masters, transcending the borders of family, friendship and class. Here, the indio helps the aristocrat, the godmother secretly shames the godchild, and the religious newly married woman succumbs to the wiles of a family friend.

On the stage of the CCP Little Theater, director Tuxqs Rutaquio’s elaborate set, which believably conjures the interiors of those grand colonial ancestral houses, and James Reyes’ costumes effectively transport the audience back in time. In fact, they jibe well with Gatchalian’s archaic Filipino to summon a distinctively Filipino Old World feel.

However, it is also these design elements that threaten to undo the production. Between the tiring verbosity and the bulky costumes, it is quite difficult to discern the authentic steamy sexiness that should be this play’s hallmark.

Which is why “Juego” owes much to its capable cast, who embody their roles so thoroughly, they make the language bearable and the scenes less tedious. Even though Rutaquio’s direction (yes, he’s on double duty here) makes the production a series of peaks and troughs—the subtlety ever present, the sensuality coming and going—he has at least extracted the best from his actors, who are really the reason this production floats.

At certain moments, “Juego” even flies. In the penultimate scene, Rutaquio conducts a literal three-way involving the suicide of a woman and a couple having sex, the whole tableau blocked and choreographed with daring artistry and intensity.

Buencamino is expectedly good in a role that allots less scenery-chewing than most leading-lady parts. Arnold Reyes is terrific as Vicente, all cocky and raunchy at first, then (falsely) desperate and lovelorn the next—in other words, a playboy of the highest order played with not a false note.

(RELATED STORY: Shamaine Centenera-Buencamino is a turn-of-the-century cougar in ‘Juego de Peligro’)
The real surprise, however, is the luminous stage debut of screen actress LJ Reyes, who, as the newly married Teresa, the object of Vicente’s lust, is at once a fiery and delicate presence onstage. And Adrienne Vergara fathoms genuine naivete and confusion as the virginal Cecilia, the unfortunate victim of Margarita’s revenge and Vicente’s seduction.

By the time the curtain falls on “Juego,” there is also a kind of confusion rolling within the viewer, a mismatch between the eyes and the ears—beautiful performances vis-à-vis overwrought dialogue. But the overall vigor and plausibility of the enterprise do their work; the production ends up staying with you, even growing on you, long after the lights have gone out.