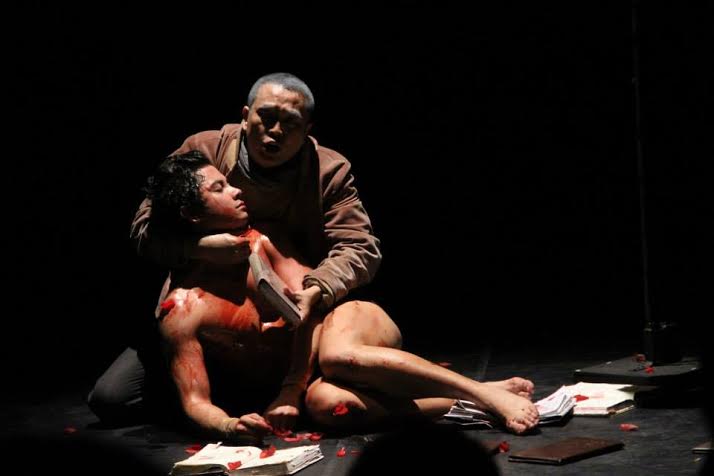 Dulaang UP’s “Bilanggo ng Pag-Ibig,” which just wrapped up its run at the Guerrero Theater in UP Diliman, is a biographical play about author and playwright Jean Genet, a strident, passionate genius who was also a deeply troubled and unpleasant man. The challenge of a biography is not to make a sinner into a saint, but to portray that sinner honestly and make you sympathize with him anyway.

Obviously, this is harder when the man is a scoundrel, and it has to be said: the Jean Genet portrayed in this play, directed by José Estrella, was someone you would not want around your children.

The lights, sound, set design, costumes, and other sundry elements of theater all had the high quality I have come to expect from Dulaang UP, though the production values were not as high as some of their other plays. That’s not a big problem, though the prop weapons deserved more attention—it does not do well to have such powerful characterization tools look less than convincing.

Where the production really shone was in its utter success in setting up flashback and memory. It was dreamy, sparse and dark, perfectly suited to portraying the roving memory of a desperate old man. (Rody Vera adapted the material for the stage based on Genet’s “Prisoner of Love” and some events in his life.)

Jojo Cayabyab as Genet (alternating with Melvin Lee) certainly brought skill and energy to the role—but I have my reservations. This was in great part due to the nature of the role itself. Genet spends the play alternately preaching his quixotic quest to help dispossessed Palestinians and using up and then throwing away young lover after young lover.

Genet was shown as a man obsessed, but the play did too much to tell and not enough to show why he became obsessed with the high-wire performer, the race car driver, and the revolutionaries who send women to become suicide bombers.

The result was that the first act of the play was weak. There had to be more to it than a Filipino actor ranting loudly about the plight of Palestinians in the 1980s while dressed as a French geriatric. We wanted a story, not a lecture.

The battle scenes in particular were quite excessive. I have no objection to onstage rape scenes and machete beheadings, but if you’re going to do that, the material must demand it. It did not. The result was that the scenes of masked men slicing the throats of screaming women even as they raped them felt like cheap shock value.

One area where the blood and gore was justified was the suicide of Abdallah, portrayed with desperate, dignified sincerity by JC Santos. His one-sided, all-consuming love for Genet could so easily have been pathetic, but the play managed to make the audience sympathize with him despite the flatness of the character. It accomplished this with beautiful imagery and a great deal of emotional resonance.

It shouldn’t have worked—the whole sad affair was depicted as a summary, and Abdallah was barely a character of his own—but it did, and the suicide and Genet’s reaction to it was easily one of the strongest parts of the play.

Another relationship that succeeded was Dolly de Leon’s portrayal of Leila Shahid, whose straightforward, honest performance as the audience stand-in gave the play a great deal of its humanity. There was real emotional pull in her arguments with Genet, her inexplicable loyalty to him, and her sad, oddly sweet farewell at the end, high as a kite and weeping over the man’s grave.

Genet, in the end, came off as a human magnet, even as he himself was drawn hither and thither by forces the mere mortals around him could barely understand.

The play did much to portray this, but sometimes it felt too much like a summary and a homily, and not enough like a story. Genet was simply hard to sympathize with, though there were moments, particularly in the second act, where you really felt for him.

The play was not all gloom and doom though—there were moments of mirth and meaning in it—but on the whole it came off as a story of failed obsessions. A sad, sad play, but in that sadness we somehow got a glimpse of genius, devotion and desire.