‘La Cage aux Folles’: Hey world, we are what we are! | Inquirer Lifestyle ❮ ❯ 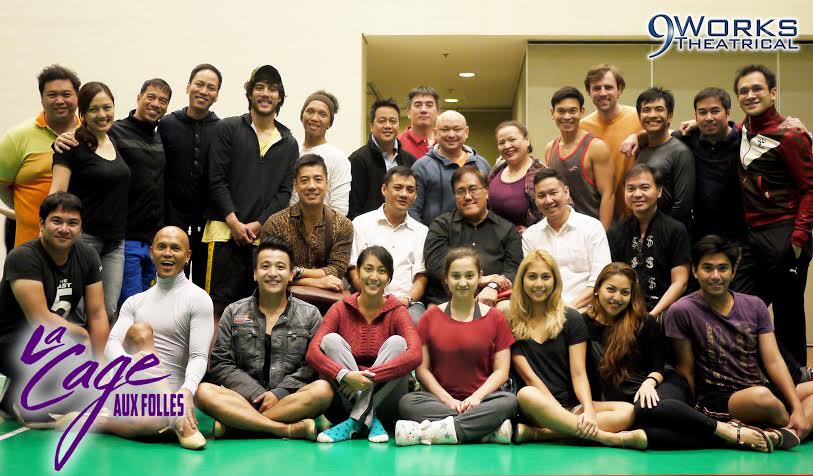 The cast and creative team of 9 Works Theatrical’s “La Cage aux Folles” (running until March 29 at RCBC Theater) with members of the Fashion Designers Association of the Philippines, which created the costumes for the show. PHOTO BY 9 WORKS THEATRICAL

‘La Cage aux Folles’: Hey world, we are what we are!

Age has not dimmed the luster of “La Cage aux Folles,” that 1970s-era happy and gay musical with its bevy of dancing drag queens, beautiful music, hilarious situations and poignant love story. It has been revived many times around the world,  with major productions in Broadway and London, and has won Tony and Olivier awards.

Repertory Philippines staged it years ago at the (now defunct) Rizal Theater in Makati City, starring Miguel Faustmann and Bernardo Bernardo, the latter stirring and unforgettable as he belted out the gay clarion call “I Am What I Am.”

The latest incarnation is a production of 9 Works Theatrical (www.9workstheatrical.com) based on the 1987 London show, starring Michael de Mesa and Audie Gemora as the nightclub owner Georges and his lifetime partner Albin, a flaming fairy, respectively. Direction is by Robbie Guevara.

The costumes were done by the Fashion Designers Association of the Philippines, no less, and the cast is star-studded—Sheila Francisco, Steven Silva, Raul Montesa, Noel Rayos, Analin Bantug and the young ballet dancers Missy Macuja-Elizalde and Joni Galeste among them.

A highlight of the recent press launch was a brief number by Les Cagelles, a gaggle of dancing queens kicking up a storm and singing “We are what we are, and what we are is an illusion.” They were actually muscular cross-dressers and among them was the macho actor Rafa Siguion-Reyna.

Asked why he chose this role, Siguion-Reyna, the son of director Carlitos Siguion-Reyna and actress-screenwriter Bibeth Orteza, said, “I wanted to be around Tito Audie and learn from him.”

Gemora, for his part, when asked how he prepared for the part of Albin, said: “Para namang hindi ako lumaki sa teatro (It’s not as if I did not grow up in theater). There were many models for me. The character Albin is very fey, then he switches to Zaza (the showgirl). Then later he becomes a mother.

“I can relate to this person. I am a father, too, a single father. Nowadays a family cannot be about gender. That’s the thing I like about ‘La Cage.’ For a lot of people, when it comes to love there is no gender.”

This is De Mesa’s comeback to musical theater since doing “Hairspray” six years ago.

“I’ve been doing a lot of films, so it’s a matter of adjusting to the medium,” he said. “You modulate your voice. Only in theater can I sink my teeth into a role, to build character. TV shows are almost the same—formula, black-and-white characters. In theater, there is no black and white, only gray. There is no money, too, but I’m fulfilled.”

Also, “I’m a father in real life so it’s easy to relate to the role.”

“It’s very easy—once they are there!” said Guevara with a laugh. “I don’t really have to do much directing. Even when they are holding the script it’s like they are not. Watching them is like a master class.”