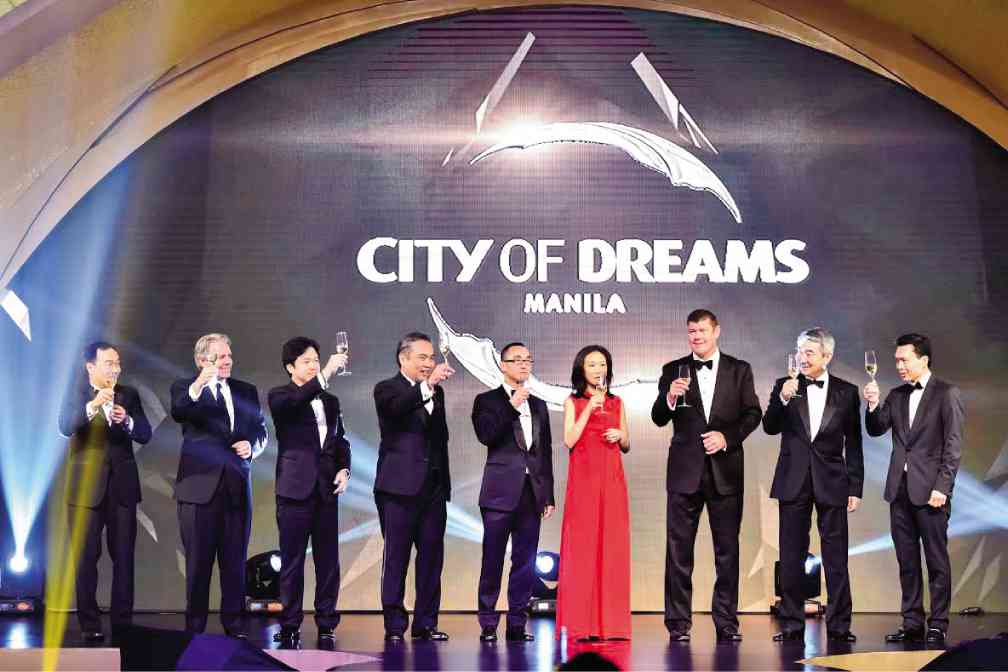 City of Dreams–world of gaming gets more exciting

The world of gaming in a resort hotel setting just got more exciting. City of Dreams (COD) Manila, the newest premier leisure and entertainment destination in the country, recently opened in the heart of Pagcor’s Entertainment City near Manila Bay.

The successful grand opening ceremony had over 30,000 visitors witnessing a grand fireworks spectacle to welcome the awesome integrated resort and casino.

Every detail of the big launch looked painstakingly planned.

The golden, egg-shaped invitation alone was a signal that an extra-stunning gown would have to be acquired for the affair.

Young designer Cherry Veric made me a gold, bejeweled outfit that blended well, but was out-volumed by Marina Benipayo’s spectacular gown, executed by Rajo Laurel who also made all the hotel uniforms.

After gracing the paparazzi-lined red carpet with my parents Alex and Marixi Prieto, we headed to the main outdoor arena where the grand launch commenced.

The key people behind COD were onstage; co-chairs Lawrence Ho and James Packer of Melco Crown Entertainment, were joined by Sharen Ho and Clarence Chung, president of Melco Crown Philippines.

Rounding out the group were Henry Sy Jr., chair of SM Prime Holdings, Melco Crown’s local partner, and Bong Naguiat, chair and CEO of Pagcor, whose administration has seen the opening of the first two integrated casino resorts in Entertainment City, thus making the country’s foray into the gaming sector a reality.

Before the night was over, COD’s honchos pledged a donation of P10 million for the Fallen 44 as their contribution to the families of the SAF heroes.

Two renowned international nightclubs, Pangaea and Chaos, are part of the COD complex. Pangaea, the lounge club, opened the same time as the grand launch, and Chaos followed a

Welcoming the partyphiles were Michael Van Cleef Ault, popularly known as “the king of clubs” and founder of the Ault Group which operates Pangaea, Chaos and other top nightclubs around the world, and chic Sabrina Ault.

The first Chaos opened in 1996, and is known as the world’s first “bottle service” nightclub. New York Times Magazine called Chaos “the hottest club in New York” around that time.

Spread across two levels, this lush and glamorous club can accommodate more than 2,000 partygoers.

For those who want a more private entertainment experience, 10 elegant, themed KTV rooms can also be found in Chaos.

World-class DJs are the draw at Chaos, among them the award-winning rapper/producer Lil Jon, DJ Vice, globetrotting Thomas Gold and Afrojack. The latter will be performing on March 19, so this will be the Manila dance crowd’s chance to see a Top 10 placer on DJ Mag’s list of Top 100 DJs.

At the Chaos opening, we spotted Apl.de.Ap enjoying the powerful vocals and mind-blowing performance of Nicole. Both of these artists have Filipino genes and are great ambassadors of how international our countrymen have become.

Nicole is also in the country as part of her work with the United Nations Children’s Fund (Unicef).

Win a visit to France

COD also has outstanding dining restaurants like Nobu and the Tasting Room.

The Tasting Room was the chosen venue for an elegant dinner to launch a special competition of Louis XIII ultra-premium cognac.

In celebration of its 140th anniversary, Louis XIII launched “Quest for a Legend”—a worldwide quest that seeks to find hidden decanters of distinctive value across the globe, the rarest Louis XIII decanter in existence, the most unique, and best preserved.

The house of Louis XIII invites private collectors in the Philippines to unveil their treasures and get a chance to win the grand prize, a visit to the Remy Martin Estate in Cognac, France.

The ongoing Quest will scour the globe in search for the rarest decanter, starting in Singapore, Malaysia, India and the Philippines, and ending on March 31.

Loius XIII collectors in the country are encouraged to send details and photos of their bottle and submit online at www.louisxiii-cognac.com/questforalegend.

The grand prize includes two business-class tickets to the Remy Martin Estate in Cognac, France, two first-class train tickets between Paris and Angouleme, including a stay there complete with French food and, of course, enormous chances to sample the finest cognac in the world, Louis XIII.