How to make ‘kinilaw’–from the ‘kinilaw master’ himself | Inquirer Lifestyle ❮ ❯ 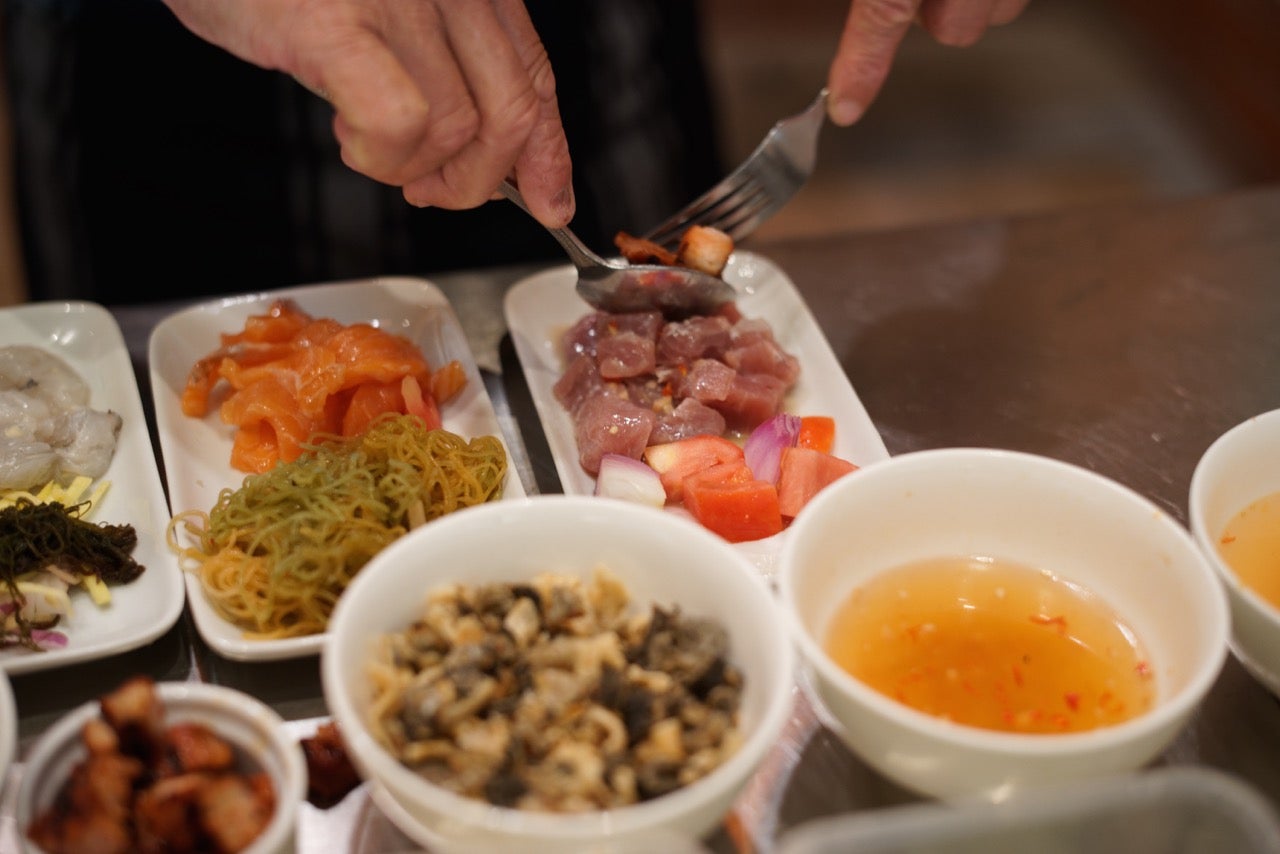 How to make ‘kinilaw’–from the ‘kinilaw master’ himself

RECENTLY two of our most respected and versatile chefs represented the Philippines at Madrid Fusion—an annual convention which is kind of like a Davos world economic forum for food.

Margarita Fores and Myrna Segismundo demonstrated how to make kinilaw, that primordial, elemental, most liminal of Philippine dishes; or, more technically, a set of ancient cooking techniques that doesn’t use heat to cook the food, but just a quick curing in vinegar.

It was the food critic Doreen Fernandez who made a strong and convincing argument that kinilaw, and not adobo, is the dish that best represents the Philippines, and I cannot disagree. Adobo is a great dish to introduce foreigners, especially unadventurous ones, to the basic flavors of Filipino cuisine; and it’s also the one that the homesick Pinoy living in midtown Manhattan will most likely whip up from ingredients bought in the supermarket.

Kinilaw, in comparison, is a deceptively simple dish that demands the freshest of ingredients and a natural instinct for flavor, as well as a receptive and adventurous audience.

It was a good choice for the ultrasophisticated crowd at Madrid; you can’t out-foam, out-gel and out-edible sand the kind of audience that it had. But by going in the other direction and showing off something simple yet delicate like kinilaw, you demonstrate to people a skill they never knew they lacked.

It actually is extremely difficult to make kinilaw, by which I mean the real thing, not cubes of frozen tanigue that have been soaked in a bath of acetic acid and turned into hard, white rubber bullets.

I have been hearing for years about the almost religious experience of travelers in the Visayas who make a pilgrimage to the kinilaw master, or invite him aboard their boat to perform his magic.

It was this same kinilaw master with whom Fores consulted to refine her technique before leaving for Madrid Fusion. It was this kinilaw master who informed much of the research that Fernandez did for her book “Kinilaw” (Anvil Press, 1991).

The man, Enting Lobaton, accepts the title with a nonchalant shrug. But how does one become a kinilaw master? Does one train like a Jedi knight and allow the forces of the sea to flow through? Does one meditate, or perhaps apprentice?

When I asked Enting himself, he told me he learned it from his father, who would simply shuck shellfish or slice up fish after the catch came in, wash it in seawater, and sprinkle on the garnishes. Enting learned to make kinilaw the way countless others before him have—by instinct, by quick judgment and experience.

But Enting has disciples, which was how I got to meet him in the first place. Since reviewing Enting’s restaurant in Bacolod, I’ve also become friends with JP Anglo of Sarsa, who counts Enting as his single most important mentor.

Enting, in turn, is teaching Anglo how to make his kinilaw, so that all this knowledge and experience can finally be transmitted and transformed.

Anglo will be making his version of kinilaw at Sarsa’s new branch at SM Mall of Asia (MOA), where customers huddle reverentially around the bar like the faithful at a sushi counter.

To make it very clear, this piece is not a review of Sarsa. I was just invited for a one-on-one interview with Enting at the restaurant where I enjoyed the hospitality. I have actually reviewed (and raved about) Sarsa in a previous article.

Anyway, I found Enting to be coy and generous at the same time. He patiently explained to me the difference between kinilaw and kilawin—the former is done with raw ingredients like fish; the latter, with something that has already been cooked by heat, like goat.

The way of slicing the fish for kinilaw is paramount: a sharp knife, being mindful of the grain, and varying the thickness according to how much you expect the fish to stiffen. Tuna can be cut in larger chunks; whereas a larger crustacean, like lobster, needs very thin slices (although he doesn’t really go for this).

Shrimp and prawns need very brief, almost nonexistent curing times. To demonstrate, he quickly made up a kilawin of glassy, deveined prawns using nipa vinegar, calamansi, ginger, shallots and a few other ingredients. I thought it was one of the most amazing things I had eaten.

But then he showed me how to eat the raw prawns by barely dipping them in the vinegar mix, letting them whiten and then letting them “cook” while you’re chewing them: absolute heaven.

Never use garlic, he said, and try to avoid flavorings that are carried by oil. If you want heat, use bits of sun-dried chilies.

There are a few trade secrets, though. Most of the dishes count their curing time in seconds or minutes, and finish each with an appropriate side of vegetables or slices of pork neck fat. The tuna would normally have blanched and absorbed the acid, but in cross-section only the outermost layer had turned white. How he manages this is a trick he will teach only to the deserving.

Which brings us to Anglo’s venture at MOA (the kinilaw bar will not be available at the branch in Bonifacio Global City). We expect his version of Enting’s kinilaw to be subtly different, as all pupils must evolve from their teachers in some way. But whether he can move kinilaw from its mystical, sea-bound sensuality into a more commercial setting without diminishing it is still a process in progress.

By the time you read this, Mang Enting will have left for his hermitage outside Bacolod once more. But what a shame if kinilaw were to remain on the peripheries, appreciated only by food writers and the cackling coven of the foodie inner circle.
What a shame if the rest of the world were to know only its palimpsest and never experience the subtlety of the real thing, that fragile mortality of where the fruits of the land meet the bounty of the sea?

To paraphrase a furry green master: Try it you must.