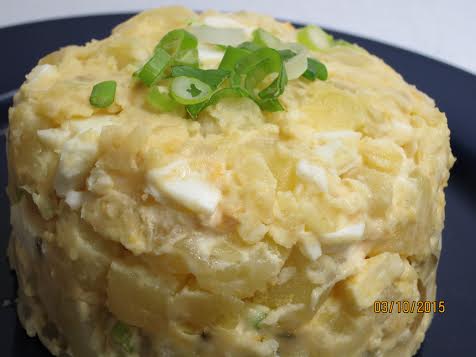 DURING the Lenten season, many Catholics abstain from eating meat on Fridays. As instituted by the church, this practice is supposed to be a sacrifice, a way of doing penance for one’s sins and the sins of humanity.

Many, however, feel abstaining from meat is not really a sacrifice, especially if they’re vegetarians in the first place. Hence they’ve substituted other ways of penitence, such as giving up a favorite food like chocolates or refraining from watching television.

I’ve even heard of some whose Lenten sacrifice is not to open their Facebook accounts (this just shows how addicted we’ve become to social media).

Sacrifice or not, it’s sometimes good to avoid eating meat and heavy meals. Here’s a salad which you can serve as a light meal during this Lenten season. It’s simple and needs only a few ingredients. This egg and potato salad goes very well with toasted bread and crackers, but if you really want to make a Lenten sacrifice, just have this as your main meal and ditch any side dish. (After the Lenten season, you can then serve this with barbecue, roast pork or chicken.)

Peel the potatoes, then boil them in a pot with enough water to cover, until the potatoes are tender but still firm. Drain the potatoes from the water and set aside to let cool.

Cook the eggs until hard-boiled. Let cool then peel the eggs.

When the potatoes have cooled, cut them into medium size cubes. Chop the hard-boiled eggs coarsely. Combine the potatoes and eggs in a large bowl then fold in the mayonnaise, spring onions and pickle relish. Season with sugar and salt to taste. Mix gently.

Cook’s tips
To cool the potatoes faster, put them in the refrigerator.

You may also add tenderized carrot cubes to the salad.

Sweet (not sour) pickle relish works best for this recipe.