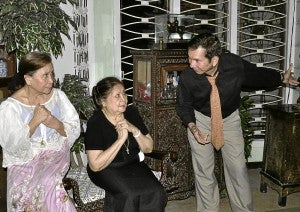 Rogers directs and plays the role of Candida.  Lala Castillo plays Paula.  The play shows how the Marasigan spinster sisters who live inside Intramuros deal with the changes happening in Old Manila before World War II, “stubbornly clinging to the genteel though impractical world of Hispanized culture.”

The play will be presented as dinner-theater in Ilustrado restaurant in Intramuros.  Audiences can watch the performance while dining on the restaurant’s Spanish-Filipino menu: Paella Ilustrado accompanied by Callos Madrileña, Roasted Chicken à la Naranja, Bonoan Bangus Relleno.

Ilustrado, celebrating its 22nd anniversary, has served as the venue for several of PDCST’s productions, recently hosting the group’s performance of “Leonor: The Love of Jose Rizal,” an adaptation of Severino Montano’s “The Love of Leonor River,” in commemoration of Rizal’s birth sesquicentennial this year.

Now 88 years old, Rogers has been creating and teaching theater since training as a college student under theater artist Wilfrido Guerrero.

Her PDCST celebrated its 25th anniversary last year.  It tours productions and also holds performances in Aming Tahanan Sala Theater, Roger’s residence in Pasig City, where the living room is transformed into a performance space.

In line with Rogers’ thrust in getting as many people interested in theater as possible, and partly to celebrate La Naval de Manila (held every second Sunday of October), the production’s technical dress rehearsal in Ilustrado on Oct. 21 will be open to audiences, who can order food while watching the rehearsal.

Both also essayed the same roles in the stage version that premiered before the film, also directed by Lamberto with a script adapted by Daisy for the Avellana couple’s Barangay Theater Guild.

This production will use the same script adapted by Daisy Avellana.