MANILA, Philippines—It is quite fitting that the image that accompanies Art in the Park materials is that of a small bird teasing out what looks like a struggling worm. The worm is actually the cursive “A” in the word “art,” and  only means that the best pieces created by young artists go to the “early birds.”

During an earlier staging of the one-day-only event, one buyer berated artists who were still busy setting up their tent at the Salcedo Park in Makati City.

“She had arrived very early that morning, around 7 a.m., and had already spotted pieces she wanted to buy. When we told her that she should come back when we opened in a couple of hours, she got angry and said she would never buy from us,” recalled young artist Yeo Kaa of Studio 1616.

The buyer did come back and has since become one of the group’s biggest supporters.

“The woman has been coming back to Art in the Park every year since, and she always buys from us,” Kaa  said.

From 10 a.m. to 10 p.m. on Sunday, March 22, the Jaime Velasquez Park in Salcedo Village, Makati, will once again serve as the venue for Art in the Park. A mix of 60 art galleries together with independent-art and student groups will sell their works which will have a cap of P40,000 per piece. 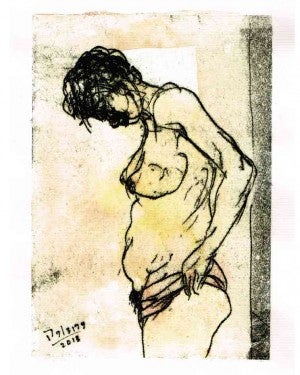 A new development is the ongoing online auction of two ink-and-watercolor drawings donated by renowned artist Danny Dalena. The drawings of a man and a woman can be viewed on the Facebook page of Art in the Park.

Bidding started March 7 and will continue until March 21. The winning bidder or bidders will be notified on March 21 so they can pay for and claim the drawings on March 22.

Kaa said that while their guild has 15 members, a total of 23 artists will be displaying 10 artworks each at their tent. The young, platinum-haired artist will be selling her pieces measuring 2’x2’ priced from P15,000 to P20,000 each.

A fifth (or 20 percent) of the total sales by participants generated on that day will be used to fund the different rehabilitation art projects of the Museum Foundation of the Philippines Inc.

As in the past years, an art installation will be on display at the fair. Artists Jood Clarino and Dennis Bato of Vinyl on Vinyl will create a Rubik’s cube-like structure with movable parts.

Aside from paintings, there will be prints, photographs, pottery and sculptures to choose from. Art in the Park may be open till late, but keep in mind the  adage about the early bird.