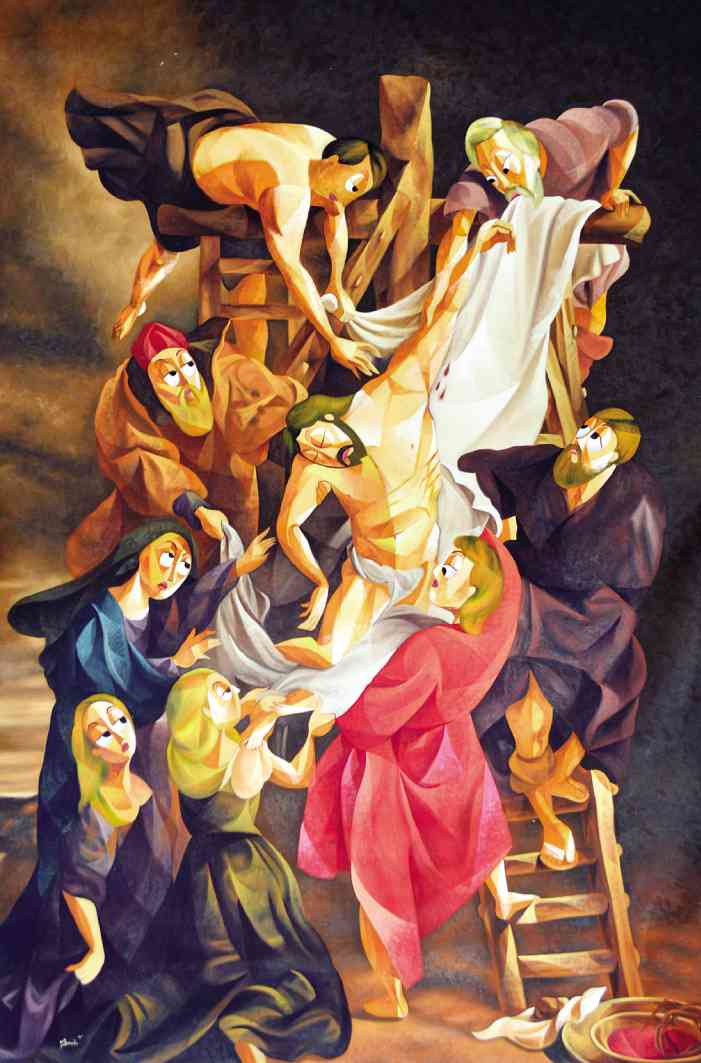 “HOMAGE to Rubens: The Descent from the Cross,” by Jovan Benito

Fresh from the euphoria of the recent visit by Pope Francis, Philippine artists pay tribute through an exhibit to the season of Lent, which commemorates Jesus Christ’s passion, crucifixion and resurrection.

Titled “Lent,” the exhibit brings the best images of Christ’s sacrifice to the public. It will run at Galerie Raphael in Taguig City, March 24-April 1.

Renowned sculptor Eduardo Castrillo, famous for his People’s Power Monument along Edsa, will present his interpretations of the crucifix.

Painter Jovan Benito depicts scenes of Christ’s Passion. Through their works, Toym Imao, son of the late National Artist Abdulmari Imao, and Ram Mallari articulate the message of Christ to a new generation of believers.

While famous for his secular monumnets, Castrillo is also known for creating numerous religious works, such as his large sculpture in La Loma cemetery on the Madonna.

His bronze and brass crucifixes truly epitomize Castrillo, a product of the University of Santo Tomas, as one of the top artists in the game. Castrillo uses metal sheets—similar to a technique used by pre-hispanic Filipinos. As the son of a jeweler, Castrillo’s pioneering practice translated these techniques into thoroughly Modernist works.

Likewise, Benito brings the Modernist penchant for abstraction into her paintings. What Benito succeeds in doing is humanizing the Christ and making an unmistakable contemporary statement.

Toym Imao, a UP College of Architecture graduate and Fullbright scholar, says his crucifixes dwell on the message peace and unity. Steampunk artist Mallari uses found objects to bring to evoke spirituality in what is inherently industrial medium.