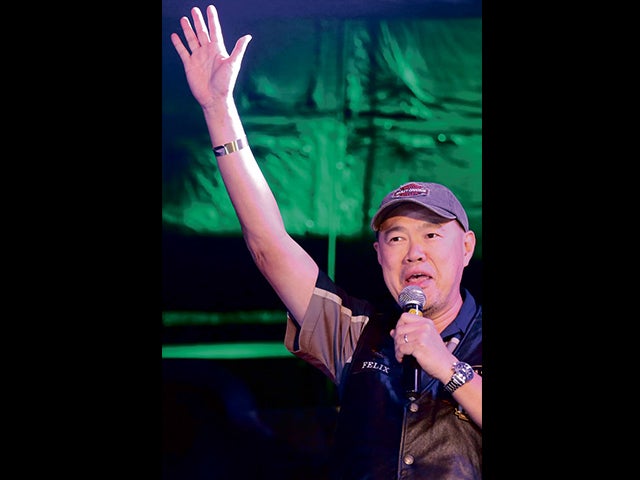 You don’t need a midlife crisis to get this bike

Ever since Peter Fonda and Dennis Hopper hit the open road in the 1969 film “Easy Rider,” the Harley-Davidson motorcycle has symbolized freedom and rebellion against social conformity.

For many in the biker world, a customized Harley “hog” or “chopper” is still the ultimate machine. But as the baby boomers who first idolized the Harley began to enter their 60s, things changed.

With retail prices for the larger Harley-Davidson models with evocative names such as the Fat Boy, the Street Bob and the Ultra Glide hovering around the million-peso mark, the brand actually caters to what marketers euphemistically refer to as the “mature” demographic.

In short, the Harley-Davidson has come to be seen as a “geezer’s” bike.

Now the typical Harley owner is closer to the aging suburbanites of “Wild Hogs” than the rangy hippies in “Easy Rider”: retirees blowing their pensions on a Harley for one last blast before arthritis or Alzheimer’s sets in, or weekend warriors escaping from lucrative but high-stress jobs by trading in their business suits and barong for biker leathers on Sundays and holidays.

Meanwhile, hipsters have turned their motorcycle fantasies elsewhere. With Harley-Davidson’s retail prices making them unattainable dreams for all but the most well-heeled bikers, younger riders with leaner wallets have set their sights on a slightly more accessible fantasy bike: the café racer.

The café racer is the sine qua non of the more arcane British “rocker” subculture.

In the ’50s and ’60s, British bikers stripped down their Triumph, Norton or BSA made-in-Britain bikes into lean-and-mean street machines, and raced each other out of their café hangouts—hence the name “café racer.”

They took their style pointers from Marlon Brando’s Black Rebels Motorcycle Club in the 1953 film “The Wild Ones”—leather jackets, peaked caps, biker boots. Their sworn enemies were the Mods—sharp-dressing fashionistas who rode Vespa or Lambretta scooters. (When Ringo Starr was asked if he was a Mod or a Rocker, he famously replied, “I’m a Mocker.”)

Rocker style has gone in and out of fashion periodically, but with the increasing popularity of motorcycles both as a practical form of transport and lifestyle emblem, café racers have experienced a revival in recent years.

Local bike nuts have taken to the café racer ideal, especially since certain older Japanese bikes—the Honda CB 750, for example—can be chopped and customized into quite nice café racers, at the fraction of the cost of a new Harley.

In fact, there is a small but passionate cult of café racer enthusiasts in the Philippines, judging from their social media presence. The café racer subculture has built a parallel iconography of cool in which Harley-Davidson is noticeably absent (or at least, not the top hog). In fact their dream bike is more likely to be a Triumph T100—the same model Steve McQueen and Bob Dylan rode in the ’60s—than a Harley.

Even “The Girl With the Dragon Tattoo” rode a Honda 350 rat-rod café racer hybrid in the movie.

Rather than idle their engines, Harley-Davidson has moved to grab a piece of this younger demographic by introducing the Street 750, a smaller displacement, more affordable model—at least by Harley-Davidson standards—that takes more than a few style points from the classic café racers of the past.

“Our target market is between the ages 25 to 35,” says Jay Bautista, general manager of Harley-Davidson of Manila, which launched the new model in the Philippines last month.

“They were asking, ‘Is there a model for us?’—because the typical Harley is for retirees and professionals.”

Designed from the ground up, the Street 750 is made for “urban riding.” Most Harleys are so big that they’re totally impractical for riding in Metro Manila traffic—they end up stranded like beached whales, overheating in gridlock while the much smaller underbones zip in and out of narrow gaps. Most end up as weekend cruisers or rally rides.

The Street 750 is suited for city riding and daily driver duties. It’s still a big motorcycle by Philippine standards, but the Street 750 is just small enough to be able to split lanes. It also has a liquid-cooled V-twin engine, so even if you do get stuck in traffic, you won’t blow a cylinder.

Best of all, it’s the most affordable Harley yet. “The SRP for the Street 750 is P550,000,” says Bautista. “But since it’s our anniversary, we’ve brought the price down to P495,000.” That’s about the cost of an entry-level compact car, still pricier than most bikes, but then most Harleys cost as much as a luxury sedan. So, just under half a mil buys you into the Harley-Davidson lifestyle.

And make no mistake, it is a lifestyle choice.

“It’s not about speed,” admits Bautista. “Riding in style is what it’s all about. You have to match your motorcycle to your personality. The Harley is perfect for self-expression.”