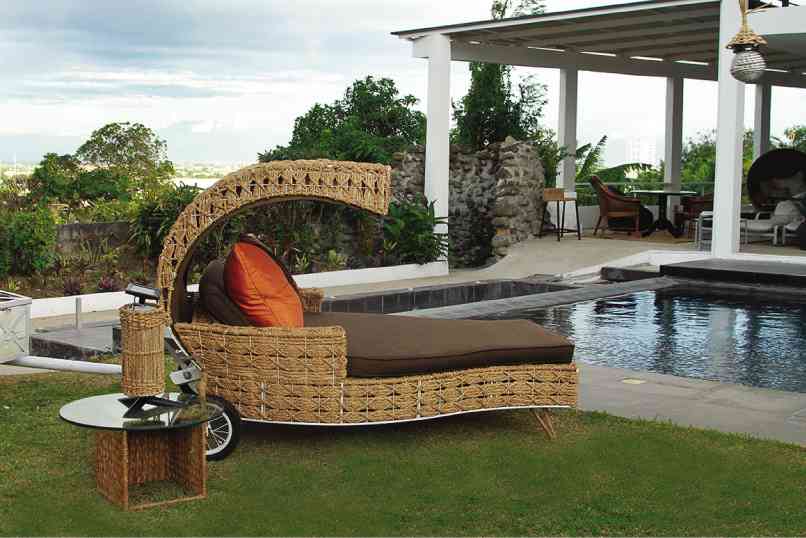 CANOPIED chaise longue with solar-powered table lamp and side table, all wrapped with water hyacinth fibers. PHOTOS BY NELSON MATAWARAN

There is value in waste, according to a balikbayan furniture designer.

A nuisance that clogs up the rivers, causing floods, the water hyacinth has found a redeeming use in home accessories. The disposable foil pack for juices makes nifty furniture upholstery, and the palochina from crates can be turned into stools, side tables and mirror frames.

It’s not just upcycling or repurposing of material that grabs people’s attention. The designs are also fashion-forward.

Furniture designer Noel Tañada and his wife, the former Michelle Bautista, an advertising executive, have set up Ecohome Art and Tanglaw not only to foster sustainable design but also to provide livelihood to underprivileged communities.

The grandson of the esteemed nationalist, Sen. Lorenzo Tañada, Noel took up Law, as was expected of him in a family of lawyers. But he shifted to Business Management, then migrated to Los Angeles, California.

He worked for Ethan Allen, Crate and Barrel, and Drexel Heritage before starting his own company, Tañada International, which catered to clients in Beverly Hills, Hollywood and Palos Verdes.

Tañada came home to try his luck, and set up a manufacturing and export factory in Pampanga.

However, frequent thefts made him close shop and return to Los Angeles. There, he met Michelle Bautista, who convinced him to come home.

“He wanted to set up a business that would help the poor,” she said.

One of Tañada’s striking designs is a curvaceous corner sofa with woven silver doy-pack upholstery. It costs P85,000, which is worth the price since it will last a lifetime and the seat won’t sag, not like the P20,000 sofas in bargain stores.

The frame is made with steel matting, a mesh that’s welded. “It will never break and is supported by a rebar.”

In Cainta, Rizal, which has been famous for making slippers and baskets from water lilies, the livelihood group One Cainta provides Tañada with water hyacinths for storage bins and lighting fixtures.

Inspired by the backlit advertising images, Tañada interpreted the concept in his lighting design. He extracted the fiber from the water hyacinth stalk and attached it to the backlit film material for lamps. The effect is soft mood lighting.

Another subcontractor is the Balikatan sa Kaunlaran National Foundation, which sources sustainable materials for Eco Home Art from its provincial partners.

On palochina, Tañada said he saw many discarded crates while driving in the south. He experimented with the dismantled pieces.

“I have to choose the perfect crate to make furniture. Not all are sturdy,” he noted.

The palochina is turned into functional but trendy pieces, such as an accordion divider or stackable benches and stools.

Tañada also uses bamboo strips, curved and painted to make modern finishes for desks and dividers. The sawali, woven split bamboo panels used for walls, is made into a pyramid shelf with uplighting and room dividers.

These natural and waste materials use solid metal as framework. “When you buy a piece from Eco Home Art, it’s fully welded steel and doesn’t corrode,” he said.

His other line, Tanglaw lighting fixtures, capitalizes on solar power.   Solar panels are attached to light sources in the lamps and furniture pieces. At night, the pieces lend a cool glow.

“You put them under the sun in the morning until dark, and they light up at night,” he said. “They give you light for eight to 10 hours. Bigger solar products have a rainy-day backup. When it’s cloudy, the panels can still detect any source of energy. But the light will last only five hours.”

Tañada is influenced by Scottish architect and designer Charles Mackintosh. A pioneer in the Modernist movement, Mackintosh introduced new ideas and technology to make designs timeless.

Like Mackintosh, Tañada said his style echoed the contrast between angular lines and soft curves.

In lighting, Tanada is inspired by Artemide, the Italian manufacturer known for progressive designs.

All told, Tañada’s designs are driven by the needs of the inhabitant and the quality of the space.

“That is how I get challenged,” he explained. “I’ve got to find the right pieces to fit inside the room that suggest an organic feeling. I love to introduce new materials from the Philippines. I like to show the world how to make them as panels, just like the sawali.”