Why ‘Kung Paano Ako Naging Leading Lady’ might just turn out to be the year’s biggest musical | Lifestyle.INQ ❮ ❯ 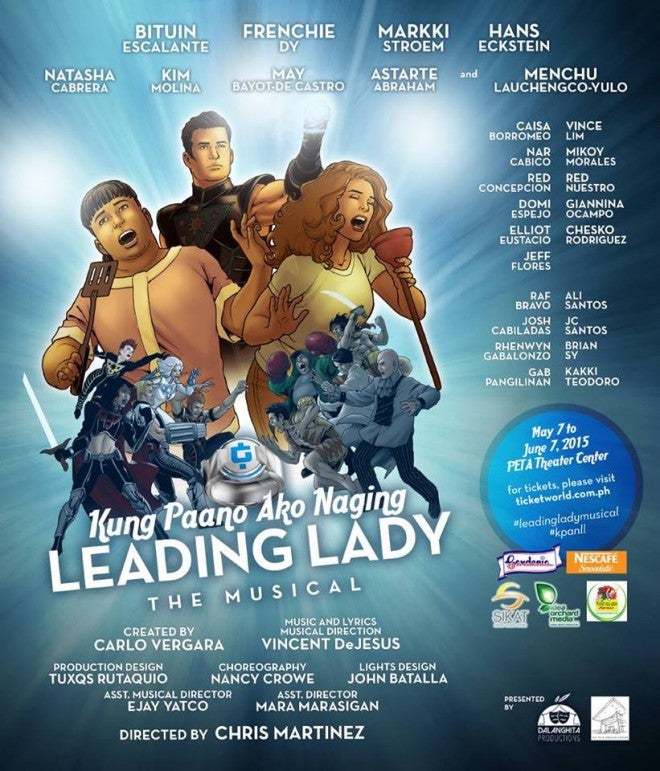 “The musical to end all musicals.”

This is the unequivocal task the team behind “Kung Paano Ako Naging Leading Lady (The Musical)” wants to accomplish when the play hits the stage on May 7.

Laughing in the background was writer Carlo Vergara, who developed the two-hour-plus show from his graphic novel and one-act play.

If you haven’t noticed yet, these three names also led the production of “ZsaZsa Zaturnnah,” Tanghalang Pilipino’s longest-running blockbuster musical.

Vergara said the people at Dalanghita Productions wanted him to develop his one-act play into the team’s first-ever full-blown production. Naturally, he thought it had to be good, so the writer had his trusty partners in mind.

“Kung Paano Ako Naging Leading Lady” follows the love-hate relationship of sisters Mely and Viva. Mely becomes a kasambahay so she could help the family out. Meanwhile, the younger Viva believes she is destined for greater things.

The conflicts are set in a world where men and women gifted with superhuman abilities fight one another.

“It was finding out whether the one-act was in the beginning, toward the end or in the middle,” he said. He now had to make a whole universe with the clues he wrote into the original play.

When he finally solved that dilemma, he had written a very long script. “When I made the first draft, it was 130 pages. I had to cut out at least 50 pages to bring it down, because I couldn’t cut anymore.”

A newcomer in musical theater, Vergara sought advice from Martinez, who told him he could suggest what the play’s songs would be about, what mood they would carry and where they would be.

In his script, he placed all these.

The work then went to De Jesus. “As long as the story is intact, it’s Vince’s ball game,” said Vergara.

De Jesus said the cast was impressive both in the singing and acting departments. And why not? They enlisted known belters Frenchie Dy and Bituin Escalante, and theater stalwart Menchu Lauchengco-Yulo, as the lead marquee names.

“The energy is good, and it’s bursting with talent. You just have to tone it down because they are very strong singing-wise that it can become noisy after a while. You have to choose: ‘This number is a va va voom number; this one is quiet.’”

The decision had to be made for more than 20 songs, mostly production numbers complete with choreography, he noted.

“It’s not as pink as ‘ZsaZsa Zaturnnah’ (hums) with its zombies. This has a serious note to it, although it is not quite dark,” he explained.

“Dramatic is the right word,” Vergara chimed in. But he was quick to add that it had “a lot” of comedy, too.

For Martinez, who considered the project a welcome break from the movies, the challenge was managing the gigantic cast of about 30, 21 of whom will be onstage at any given show.

From the get-go, he explained, the bar was set high by Lauchengco-Yulo, the “First Lady of Philippine Musical Theater,” who is finally making her debut in an original Filipino musical.

Vergara also made sure that the script gave every character a moment, so they’d better shine.

“I’ve already told some of the actors to do better,” Martinez said. “They know how exacting I am, how exact I want things to be; but I give chances.”

Like the two other spearheads, however, he acknowledged the ability and discipline in the cast, whittled down from 200-plus auditioners.

“It is very hard to cast a Carlo Vergara play because [the talents] have to be super yummy,” De Jesus joked. “In ‘ZsaZsa,’ Dodong has to be handsome, dark, with talent, sings and dances… Carlo has a specific ‘drawing’ in mind.”

The characterization in Vergara’s mind was the ultimate guide, the three agreed.

It is that agreement, or familiarity, that they think makes the job of creating another hit easier.

Aside from Vergara and De Jesus, he has  also worked with choreographer Nancy Crowe in previous productions. He and Vergara have also partnered with the project’s  set and costume designer Tuxqs Rutaquio for the one-act-play version.

“The process was easy because I’ve done a lot of musicals, and because there’s a consultation going on,” said De Jesus.

The three know how to compromise, he noted.

“Usually, in musicals, if it’s quiet, it is a dialogue, and if it’s too intense to remain a dialogue, it becomes a song. If it’s bigger than a song, it becomes a dance. But in this case, we retained a highly emotional and powerful dialogue that Chris wanted intact.”

They also converted some dialogues into songs, with two pages easily becoming a short song, De Jesus explained. “You just make the words rhyme, like we did in ‘Zsa-Zsa.’”

“It’s discovery, it’s a play in progress, which is fun, and scary—but more fun,” he said. Because of this, songs and scenes can get fine-tuned at any point in the rehearsal, perhaps to improve the scene or give justice to the talent onstage.

“Hopefully, if this goes for more than one run, it’s just going to evolve,” Vergara added.

De Jesus thinks that could happen, because “Kung Paano Ako Naging Leading Lady” packs a relatable story: “It’s being where you’re meant to be against proving your worth.”

Vergara said: “Yes it’s funny. Yes you have the little love story going. But, ultimately, with everything happening, it’s about finding and rooting yourself in where you want to be, or where you’re meant to be.”

Each character has a yearning, a flaw, he noted. “All these ram against each other, and people win, people lose, things fall apart, things try to rebuild.”

Just like ‘ZsaZsa,’ people can read it on the surface or go deeper, the writer added. “As a social commentary, that whole idea of big personalities affecting the ordinary people, it’s prevalent, it exists.”

Martinez agreed: “There are many twists and hidden messages.”