The demolition of heritage structures in the country is now becoming a “cultural epidemic,” with a number of important structures torn down despite the passage of the National Cultural Heritage Law six years ago.

Adding to the lengthening list is the American-era Mountain Province capitol building in Bontoc town, a presumed important cultural property under Republic Act No. 10066, or the National Cultural Heritage Act of 2009.

The building was demolished on orders of Gov. Leonard G. Mayaen.

The Heritage Conservation Society (HCS) and other heritage advocates were surprised to learn that the old Mountain Province capitol building had been demolished. It was torn down to give way to a new capitol building since it was allegedly “prone to fire.”

The National Historical Commission of the Philippines (NHCP) has said that the structure “is one of the few remaining half-brick, half-wood houses that the Americans built in the area.”

What is even more surprising is that the demolition happened two years ago, but it is only recently that the matter has become current. No one raised a cry in 2013 when it was razed to the ground.

“I went to Bontoc [this Holy Week] to see the capitol, which itself is beautiful. Then to our surprise, two-thirds of it has been demolished,” said blogger Berniemack Arellano of the HCS Youth.

Arellano said he was “shocked, saddened, mad” and felt a “sense of loss” over the demolition.

“What made me [madder] was it was demolished two years ago but it never made noise in Manila,” he said.

The remaining one-third of the building, said Arellano, is still used for offices “but haphazardly covered on the destroyed end.”

HCS chair Gemma Cruz-Araneta described the incident as “lamentable, tragic,” and deplored the “ignorance” of local governments of the heritage law.

Cruz-Araneta said Bontoc resident Ezra Gomez and his late father, Gov. Jaime Gomez, did all they could to save the building.
“They were in constant touch with the NHCP, which said it should be preserved and sent guidelines,” she said. 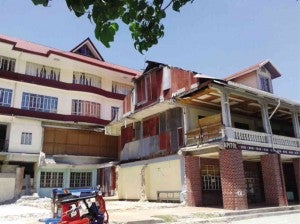 Cruz-Araneta suggested that the building was destroyed out of vanity and greed.

“As you know,” she explained, “many government officials, at all levels, believe that Philippine history starts with them, that nothing existed before they assumed office.

“That seems to be the mind-set of the incumbent governor. Many officials are ignorant of RA 10066, but even if they are not, they willfully violate the law. Could it be greed? You tell me.”

The HCS, through its president Ivan Henares, released a statement saying it was outraged by the demolition.

“It was an outstanding example of Cordillera architecture built during the American colonial period,” Henares said.

He added the demolition was even more disappointing because what was destroyed was a government structure by the government itself.
“We urge our government cultural agencies to create an inventory of all government-owned heritage properties and ensure that the government agencies, corporations, institutions and local governments that own these properties are properly informed of their responsibility to protect and conserve them,” the HCS said.

The cause for preservation of the building started in 2011 when the provincial government planned to have it demolished to give way to the construction of the new capitol building.

The NHCP wrote the provincial government on what should be done on the building it acknowledged as a presumed important cultural property under the heritage law.

“We strongly suggest that a new and appropriately sized capitol building be constructed at another site to accommodate the various offices and functions of the provincial government, while the original front wing of the old capitol building be preserved and reused as a provincial museum, cultural and tourism office, or training and conference center,” reads part of that letter.

The NHCP also made recommendations, such as preserving the shell of the building, reconstructing the interior with reinforced concrete or steel framework, and “dismantling the wooden building wing and reconstructing its architecture using simulated concrete material.”

It also recommended the dismantling of the wooden building wing and integrating its facade into the new building. A copy of the development plan should be submitted to the NHCP for assessment and recommendations.

Heritage observers noted that the NHCP letter was self-contradictory for suggesting that the wooden part of the building be dismantled and that the new structure use concrete aping the original wooden material.

Eventually the NHCP opinion was not followed since the provincial government proceeded with the demolition.

But the April 25, 2013, cease-and-desist letter seems to indicate that the NHCP could have cleared at least the partial demolition of the building, since it said that while it had “approved to integrate the old components into the new structure,” its recommendation was “misinterpreted.”

“The NHCP agreed to the construction of an additional floor level, with the understanding that wooden components be dismantled and then reintegrated into the new structure,” the letter addressed to Governor Mayaen said. “However, the demolition of the original brick wall foundation was never an option.”

The Inquirer asked the NHCP chair Ma. Serena Diokno and executive director Ludovico Badoy for their reaction and update on the issue, but they did not reply.