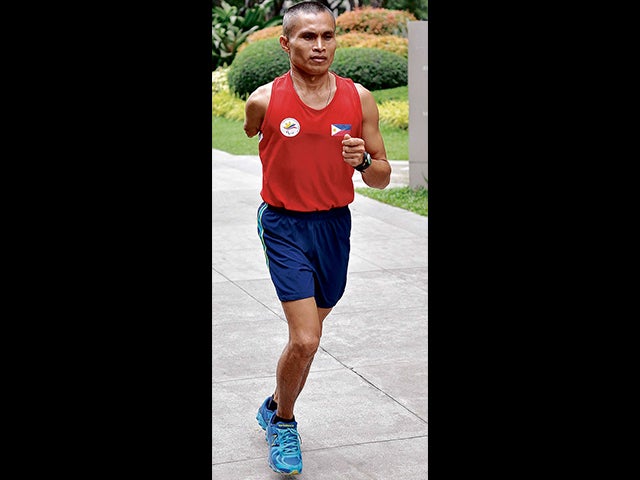 From differently abled to elite athletes

When eyes are set on the goal, every hurdle thrown your way turns into a minor inconvenience, as you become stronger and move on to the next challenge.

For these three differently abled elite athletes, finishers of the last

a missing leg or arm only fuels them to push their limits even further. For what is pain compared to the glory of winning?

When running champ Isidro “Coach Sid” Vildosola lost his right arm in a rice mill accident as a boy—he was trying to save his younger cousin, whose malong got caught in the grinding machine—he thought he was going to die.

He was then 13 years old, and the accident left him with a severed arm and a broken spirit. For two years, his arm continued to bleed since his family could no longer afford the medical expenses.

But as his arm grew frail and shrank, his determination to rise above his misfortune grew stronger.

On his third year in high school, he decided to engage in sports. He loved basketball but, with only one arm he thought there was no way he could be any good at it. One day it hit him: Why not give running a try?

He had always been running, as a young boy, because it was a necessity. Each morning he would run to school, going up and down a hill, crossing a river, before hitting the dirt road that led to his school.

“I didn’t want to be late for school and I especially did not like to be still on the road when it got dark after school hours. Takot akong abutan ng dilim sa daan. So I ran fast, my fastest, all the time,” he said.

His victory in the annual Milo Marathon brought him to Manila in 2005. He has been competing in the Southeast Asian and Asian Games since. After earning nine golds, one silver and one bronze medal, Vildosola knew he had found his life’s calling.

One of the major disadvantages of running with one arm is the lack of balance. To compensate, Vildosola exercises his right appendage more than his good one. If his left arm trains with a 50-pound dumbbell, his right arm lifts 70 (he ties the dumbbell to it). And when he has a competition abroad, he is trained by no less than 15-time gold medalist Elma Muros-Posadas, the country’s long jump queen, who has won more gold medals than any other Filipino athlete.

Vildosola is currently training to qualify for the 2016 Summer Paralympic Games in Brazil. But the campaign needs money, which he sorely lacks. On a few good days, he said, he privately coaches and trains corporate executives and sometimes handles a corporate account. Some days he gets donations. Most other days, however, he competes to make ends meet.

“The only time I get a proper athlete’s nutritional diet is when I compete abroad, where quality food is free. Here at home many of us subsist on canned goods and instant noodles,” he rued.

Arnel Navales Aba, the one-legged swimmer, also dreams of joining a triathlon without lugging around his crutches. He made news three years ago when a photo of him emerging from the water alongside Cebu’s top contender, Noy Jopson, and Alaska CEO and president Fred Uytengsu, during the Ironman 70.3 in Mactan, Cebu went viral.

But life has not always been about swimming for Aba. He used to fear water when he nearly drowned at age 8. A former jeepney driver, Aba was on the road to self-destruction, spending what little he earned on alcohol and drugs, when a freak accident severed his right leg in 2004.

He was 20, checking his jeepney’s engine under the hood, when a drunk driver smashed right into him, sandwiching him between the two vehicles. His left leg was severely damaged and had to be amputated.

Aba attempted to end his life several times but failed. When he tried to hang himself, for example, he said the tree branch broke and he fell to the ground groaning in pain.

One day, he planted himself in front of a moving truck. The driver stopped and talked him out of it. That was the day his life turned around for the better.

“The driver said he was operating a resort that had a swimming pool, and told me to take up swimming,” Aba said.

Aba swam, but his initial attempts were pitiful. He helplessly flapped his arms, trying to keep afloat, and kept his head above water the entire time, like dogs do. He couldn’t swim more than a few meters without stopping and holding on to the lane line for his dear life.

But he persevered. Overcoming his fear of water became a powerful addiction. He showed up for training religiously and trained during his free time.

In 2005, Aba was recruited to join the national training pool to compete in the Association of Southeast Asian Nations Para Games.

Today, Aba swims 13 kilometers every day and can easily finish a 400-m freestyle in five minutes. He hopes to run his first full marathon someday and ultimately finish a full triathlon on his own.

“I just want to prove that you can make a difference in your life. Even if you think life is going nowhere right now, have faith that things can only get better for you. I would have still been an addict had that drunk driver not crashed his car into me,” he said in Filipino.

Unlike Vildosola and Aba, whose accidents pushed them to fulfill their destinies, Arthus Bucay was already a strong rider when he was thrown off his bike during a local race in 2003. With the cleat on one foot still clipped to the pedal, Bucay twisted his body as he fell and damaged his hip.

Bucay thought it was just another sprain. It was not until two weeks later that his doctor discovered a hairline crack on his hip and advised him to undergo operation right away.

In 2004, through sponsorships, he underwent surgery that required three screws to be drilled into his bone. His doctor advised him to rest for two years, but after a year he began to join races again. He needed to earn money.

“Nasira yung inopera… Kailangan ko ng P200,000 para sa operation,” Bucay said. And that was when he noticed that his right leg was becoming shorter than his left. It was devastating, since biking was his livelihood.

In 2012, Bucay learned that the National Paralympic Committee of the Philippines was recruiting. He signed up, tried out, and got accepted.

Today he is one of two riders on the team and has since been competing here and abroad. He is currently training to qualify for the 15th Summer Paralympic Games in Brazil.

When he is training for a major competition, Bucay receives an allowance of P15,000 a month. During off-season, though, he receives nothing and has to resort to joining races again to make a living.

Our athletes, he said, do not have the luxury of rest even when their body needs it, making them prone to injuries.

Still, they plod on, showing that they truly are champions at heart.