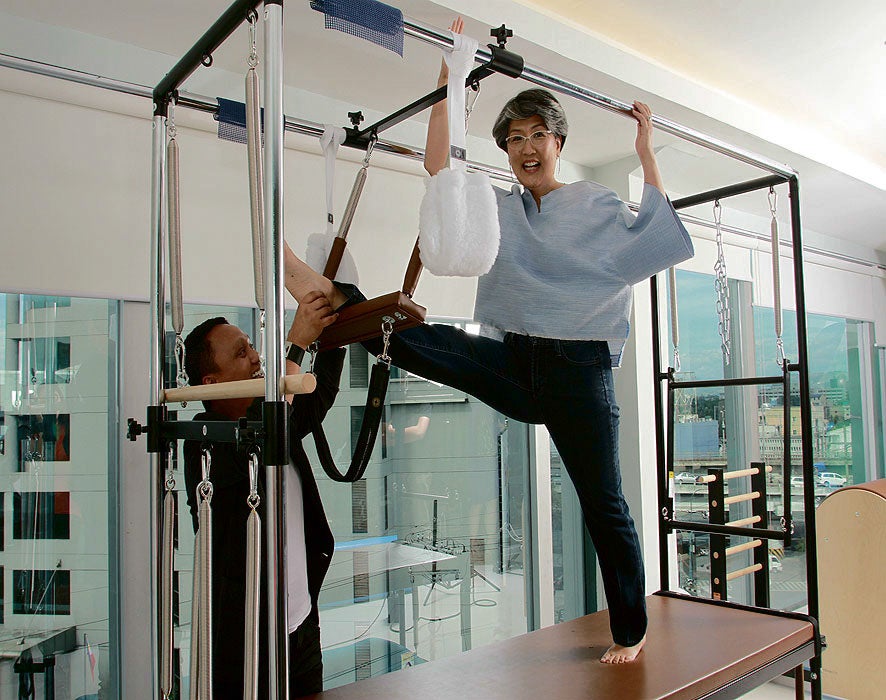 Why Irene Araneta needs to do Pilates

Baby boomers will recall arts patroness Irene Marcos-Araneta as the presidential daughter with the golden voice and the commanding musical conducting skills. Unknown to many, she also has a flexible body fit for a gymnast or dancer.

“This is my singular talent, and nobody has to know,” said Araneta with self-deprecating humor.

A fitness enthusiast, she was a guest of honor at the opening of Options Studio in Quezon City.

She’s hypermobile. Her range of motion in the joints is beyond normal,” said Ole Eugenio, owner of Options Studio and Araneta’s instructor.

Although being supple may be a good thing, being too loose in the joints makes one prone to injuries. “I’ve hurt my hip, my knee and undid my hip flexors. I did weird things and got very unladylike injuries,” she recalled.

Araneta has likewise suffered from tennis elbow from badminton, shoulder-blade injuries from conducting, and a torn cartilage from other sports and dancing.

Doing the contortions she saw in yoga posters, she would end up with dislocated joints. Once, on the plane, she sat and slept all through the flight on a cross-legged lotus position. “I couldn’t walk afterwards,” said Araneta.

Eugenio prescribed Pilates exercises to open up her hip joints and release the tense muscles.

Pilates is a system of conditioning exercises designed to strengthen the core muscles and activate the spine on coordinated breathing.

Since then, Araneta has learned to engage the right muscles to protect herself from getting hurt.

In the early years of her training with Eugenio, he would tell her to take it easy with limbering exercises. Araneta was always supervised in doing stretches.

Araneta also gets muscle aches and pains from normal activities such as gardening, cultivating vegetables and climbing up the fruit tree on the family farm in San Jose del Monte, Bulacan.

“I’m supposed to be turo-turo at this point, but I don’t like to be,” she said, preferring not to delegate garden tasks. “It’s more fun to harvest when you planted it yourself.”

To guard against injury, Araneta acknowledges the benefit of increased body awareness from Pilates. She is more conscious of her alignment, balance of weight and functional movement, and is able to correct habits that brought the pain in the first place.

“I’ve stopped getting injured. This system teaches you how to move properly, and which muscles to use. It’s not just about the posture while you’re walking. It’s also about using the right muscles while you’re playing a sport. I need that because I’m very flexible,” said Araneta.

She gave credit to Eugenio’s sharp eye, dedication and patience during their workouts.

Eugenio noted that his client has learned the muscle control principle of Pilates, which is to be mindful of each movement and to avoid jerking or collapsing motions.

The coordinated deep breathing in Pilates has also helped her cope with asthma.

Araneta has been exercising since the 1970s under Elpidio Dorotheo, the weight-lifting coach of elite athletes and the personal trainer of her father, then President Ferdinand Marcos. Back then, bodybuilding was not scientific and gender-specific as it is today.

“There were few trainers then. They didn’t know the difference between male and female bodies. It was all about strength. I turned into an East German swimmer,” she said with a giggle, referring to a robust physique.

In the ’70s, female Olympians from East Germany were known for their bulky torsos and skinny legs. Think the Hulk in a maillot.

“My dad was a fitness maniac. He turned us all into jocks,” she recounted. “He was a 300 sit-ups kind of guy, 300 squats with barbells and 300 scissors kicks with legs four inches off the ground. When he did push-ups on the armchair, my mother would cry because they were antiques: ‘Huwag diyan!’”

During golf games, while waiting for his turn to hit the ball, the former president still kept going with scissors kicks and push-ups.

Because he set high fitness standards for himself, Marcos expected a lot from his children. He would check their exercise cards designed by Dorotheo. If his daughter was supposed to do 30 repetitions, Marcos goaded her to go for 40. That was how she bulked up, recalled Araneta.

Today, she also keeps fit by doing chores on the farm or going to the gym.

Likewise, her brother, Sen. Bongbong Marcos, also Eugenio’s client, would hit the gym to unload the pressures of work.

Their father taught them that exercise was the best form of stress management.

“He’s always been philosophical,” Araneta quoted Marcos as saying: ‘You have to stay fit because you don’t know what your destiny is, but you must always be ready for it.’ So exercise is not brainless. It helps, say, when you’re staying up late to study, you’ve got to be fit. At least, stress becomes productive with exercise.”

Although Araneta says she only warbles in the shower now, she is still involved in music by keeping the Philippine Youth Symphonic Band alive.

“I help raise funds so that their education is free. I have to keep up with kids as young as 7 or 8 years old. They stay up all night practicing and making kalokohan in summer classes. That’s why I need Pilates.”