Truth or Drink: Would you play this game with your parents? | Lifestyle.INQ ❮ ❯ 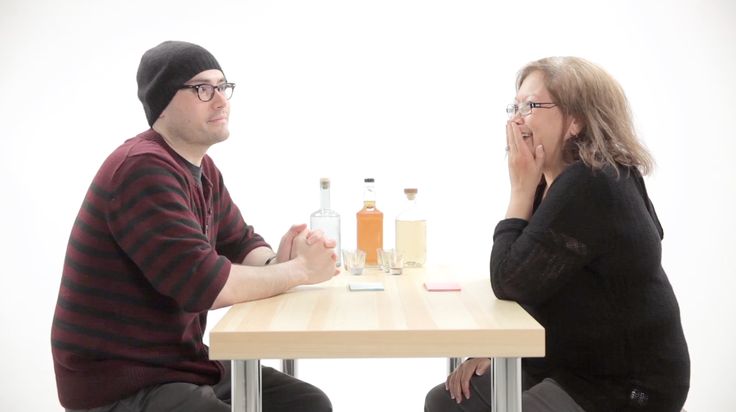 Truth or Drink: Would you play this game with your parents?

Welcome to Truth or Drink, Cut.com’s crazy game and our new Internet obsession. Two people ask each other questions that are written on cards. If they decide not to answer a question, they need to take a shot of vodka or tequila.

The rules seem simple enough until you realize who is playing—in a series of hilarious videos, Cut.com has paired up parents and their kids, husbands and wives, and boyfriends and girlfriends, resulting in funny and awkward moments (and YouTube gold). The parents and kids videos reach a special level of awkwardness.

“When did you lose your virginity?” “What position was I conceived in?” “Have you ever watched adult films?” “How and when did you know I was sexually active?” “Do you send nude images to people you’re dating?”

“If there’s one thing you would change about me, what would it be?” “Who’s your favorite child?” “When was the last time you lied to me?” “What’s something I do that embarrasses you?”

Truth or Drink is not a game everyone could play (just thinking about playing with our parents makes us feel like hiding under our desks), but it’s a great game for everyone to watch. The videos are laugh-out-loud funny and sometimes sweet and touching.

We quizzed Cut.com’s creative director Mike Gaston about Truth or Drink, who he wouldn’t want to play with and the question he dreads the most.

And nope, he didn’t need to take a shot.

Who came up with the idea for Truth or Drink?

I’m going to blame Blaine Ludy, my producer, for the idea. But he’d probably point the finger back at me.

How did you get people to say yes to playing the game on-cam?

Well, we stacked the deck with friends and family. But it’s surprisingly easy finding people willing to play a game like this in front of total strangers. I want to say that we’ve been very lucky with our casting.

Who came up with the questions?

We all came up with the questions together, and then I did a final edit the night before the shoot. Most of the work in putting the questions together is in finding the right balance between questions people will likely answer and questions they’ll likely drink on. In the case of the parents video, we wanted to make sure we had plenty parent-child relationship specific questions.

Did you ever have to remove questions because they were too crazy/embarrassing/awkward?

Uh…Yes. Blaine Ludy, my producer, has a twisted sense of humor. I had to cut some questions that felt a little too provocative. The man’s a genius, but half his ideas involve someone being naked.

Which of the Truth or Drink videos are your favorite and why?

I’m biased. My brother and my mom (Brian and Genie). My brother is so dry in his humor and my mom is so bubbly. They’re such an interesting pair. And I can watch my mom do anything. The woman needs her own TV show.

Who is the last person you’d want to play Truth or Drink with? Why?

I would not want to play Truth or Drink with my ex. There’s something inherently horrible about featuring the intimate details of your failed relationship on camera. That being said, exes are also the subject of our next series of Truth or Drink videos. So if you know anyone who’s available, have them e-mail me!

Which of the questions do you dread answering?

Are we correct in thinking that some of the people who played are Filipino?

I am half-Filipino! My mom is from the Philippines and I’ve put her in three of our videos now. She participated in the last Truth or Drink session with my little brother. I also put my cousin Raf and my Uncle Bong in that last video. Fun fact, Raf is married to April Villanueva. She used to be a singer on SOP.

Tell us more about Cut.com.

We’d love to be seen as a media company that creates stories for people that are fun and sharable, but are also considered smart and well-made. That may seem simple, but there aren’t many publications that seem able to hit that sweet spot consistently. Right now, Cut is just a YouTube channel that makes videos intended to go viral. But we have some exciting stuff planned that people won’t see coming, and I hope will begin to signal our plans for the future.

Any tips for people who want to play Truth or Drink at home?

If you live together, don’t play. If it’s a yes or no question, drinking basically means “yes.” If you’re playing with your significant other, they won’t let you get off that easy. Be prepared to explain yourself.

If people have watched all the Truth or Drink videos, which Cut.com video should they watch next and why?

“Sexy Charades” for anyone that likes to see couples play games like Truth and Drink and “Parents Explain the Birds and the Bees” if you prefer parent/child awkwardness.