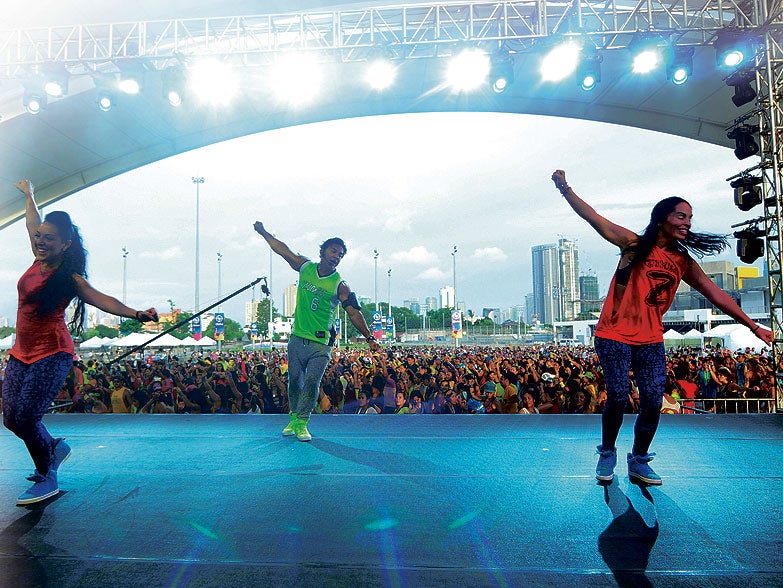 The rock star of Zumba came and went, and left a legion of fans in Manila aching for more.

Last year the Philippines set a new world record for holding the biggest Zumba class, when 8,232 fans danced their way to fitness at SM City Cebu, dislodging the record once held by India in 2012 that saw 6,671 participants.

Finally, after three years of pleading—and praying—by fans on social media, Beto Perez, the creator and cofounder of the Latin-inspired fitness workout, finally visited and gave fans the Zumba party of their lives at the Globe Circuit Event Grounds, Makati City.

“This is my work. This is my life. I have been working since I was 15 for this moment in my life. I wanted to be successful, to be the best, to be number one. And I did it,” said Perez, now 45 and co-owner of the multimillion dollar Zumba trademark.

A Zumba class is an infectious, almost cult-like experience for newbies. Some followers even have the Zumba logo tattooed on their bodies. Classes are held in about 200,000 locations worldwide, and every week an estimated 15 million people attend a Zumba class.

For Perez, however, a bloated ego can only be detrimental to success. “The ego is a poison. It’s so hard not to have an ego when everybody loves you and you’re number one. But be careful, because the most important people in an instructor’s life are the students,” he said.

Perez has always loved dancing. He’s a huge fan of Michael Jackson, and as a teenager was into street and breakdancing.

He was raised by a single mom; at age 15 he started teaching step aerobics in his hometown in Cali, Colombia, to help support his family.

Zumba, however, was developed by accident, he said. One time, while rushing to get to his class on time, he forgot to bring with him the cassette tape he used for step aero. Fearing he’d lose his job, Perez announced to his class that he was introducing a different routine that day, something he had been working on for a long time.

He pulled out his personal cassette tape, the one that contained music recorded from the radio—you can hear the DJ’s voice in some songs, he said—improvised a new routine on the spot, and voila, Zumba was born.

The class was initially named Rumba. When he moved to the United States in pursuit of his American dream in 1999, people had a hard time pronouncing it, so Perez, along with his business partners Alberto Perlman and Alberto Aghion, decided to rename it Sumba but with a “Z”—because he loved Zorro as a kid.

The no pain, no gain fitness philosophy at that time did not resonate well with the young Perez. Instead, he took inspiration from ’80s aerobics quee Jane Fonda, whose classes, he said, were always “fun, effective and easy.”

“We combined those elements in the Zumba party. For me, if you don’t smile, you don’t gain. When people have a good time, you can see their amazing energy and they get amazing results. That is the magic of Zumba—something that is fun,” Perez said.

Dancing his way into the hearts of Americans was not easy though. He slept in public parks because he couldn’t afford rent. Perez arrived on the shores of Miami without knowing a word of English, except probably for “hello.” Turned out he didn’t need to—at least not right away. Perez let his dancing do the talking.

“I thought, this is amazing. I love dancing, and they pay me for it, and I have women around me all the time. This is the best job! I want to do this for the rest of my life,” Perez said, laughing.

There’s also Zumba fitness game for Wii and the Xbox, and a line of accessories bearing the Zumba trademark.

For Perez, everything seemed to fall into place. When his team started selling Zumba in infomercials, they received many calls requesting for teaching manuals; when he wore a shirt on TV emblazoned with the word Zumba, people began requesting for apparel.

“It’s like we’re Coca-Cola. People started buying for their collection,” he said.

Next year, a TV series depicting his life story will debut in the US. Perez is also considering its movie version in the near future. He is also currently working on writing a Broadway musical based on Zumba, “maybe a little interactive,” he said.

The road to the top, however, entailed numerous sacrifices. “I want people to know that anything is possible. But it’s so hard because I sacrificed so many personal things in my life. I’m not married, but I’m not single either… Oh, I love girls! I’m not gay,” he said, laughing.